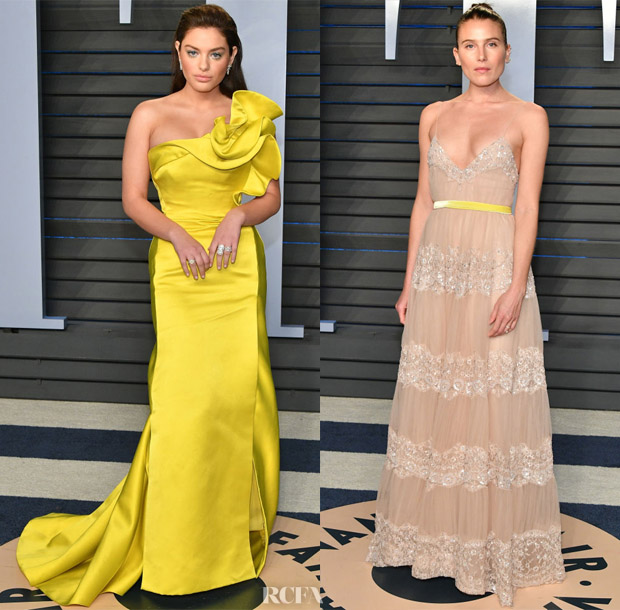 The crush of beauties continued in full force on the red carpet of the 2018 Vanity Fair Oscar Party last night (March 4) in Beverly Hills, California.

Odeya Rush: The young starlet was a vision in this neon-bright chartreuse Vivienne Westwood Couture gown. The sculptural, one-shoulder ruffle detail is nothing we haven’t seen before, but the bold colour made the look feel dynamic. I do think she could have offered up a more youthful beauty look—and less bronzer—to accompany the sophisticated sass of the gown.

Dree Hemingway: There was a delicate daintiness to this Valentino Pre-Fall 2018 nude, embellished lace gown, which Dree echoed in her minimal hair and makeup. The yellow-tinged, ribbon belt made all the difference in breathing a bit of life into the neutral dress, with Repossi jewels to complete the look. 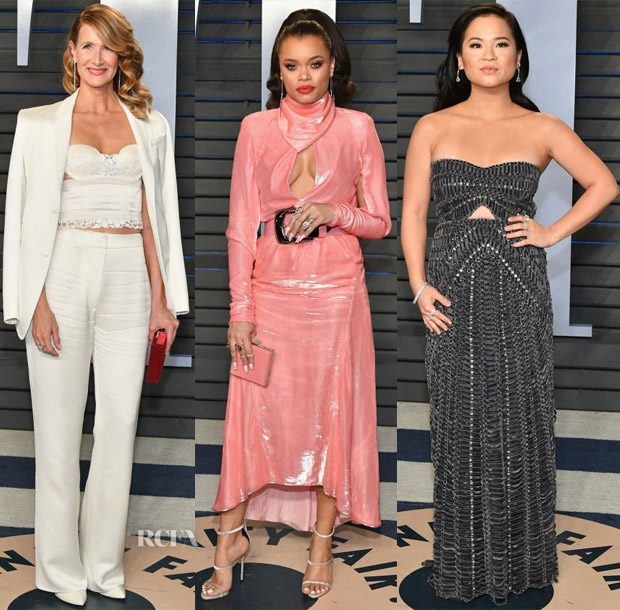 Laura Dern: I loved Laura’s pristinely statuesque Oscars look, and she continued her successful white theme with a Gabriela Hearst Fall 2018 suit. However, any mannish indications from the sharp tailoring were quickly overruled by the La Perla bustier adding a boudoir-referencing allure to the look. She accessorised with Roger Vivier shoes and a red Roger Vivier clutch for a statement pop of colour.

Andra Day: Andra had a bit of a puzzling go of it at the Oscars, first on the red carpet and then with her second look—this Nina Ricci Fall 2017 dress that failed to flatter on three key points: colour, fit, and execution. The silhouette was sad and drab, and not even that bold red lip could remedy it. 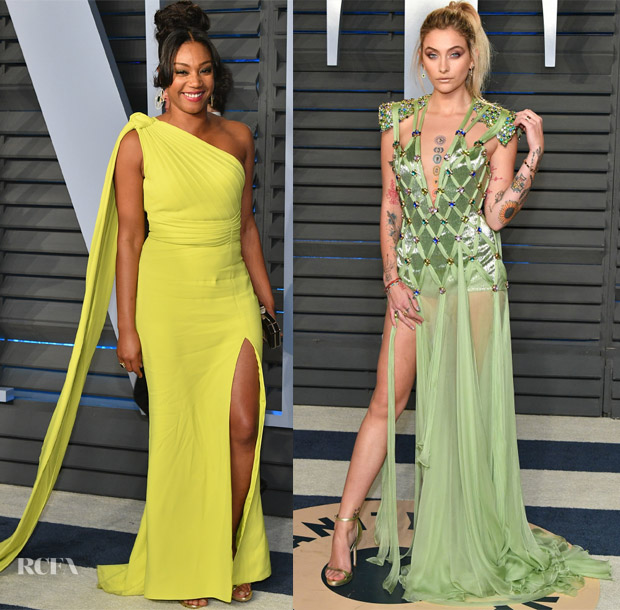 Tiffany Haddish: After her traditional Eritrean dress, Tiffany changed into a custom Brandon Maxwell gown that immediately caught my attention by virtue of its highlighter-yellow hue that she rocked so well.

Paris Jackson: As Paris continues to reinvent herself, she may have been channeling a particular Tinker Bell alter ego in this embellished Atelier Versace number. 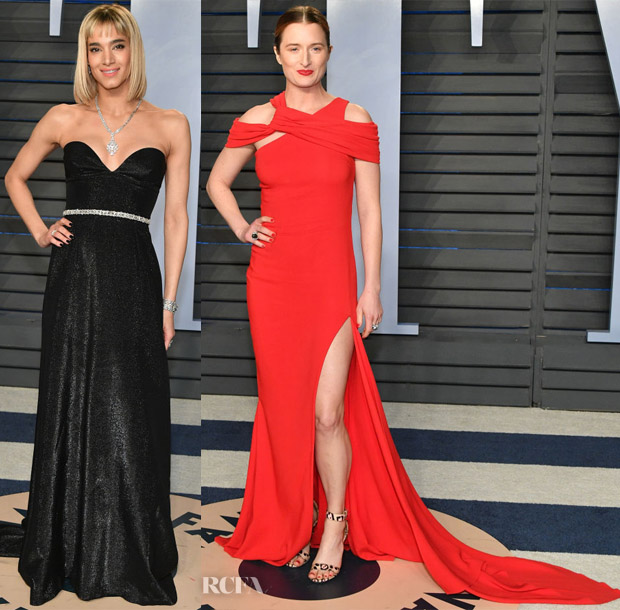 Sofia Boutella: Although this Prada strapless, embossed dress was rather minimal—by Prada standards, at least—Sofia enhanced its glamour with her diamond pendant necklace.

Grace Gummer: I like the modernity of the asymmetry in this Monse Fall 2018 gown, enlivened further by her leopard-print sandals. 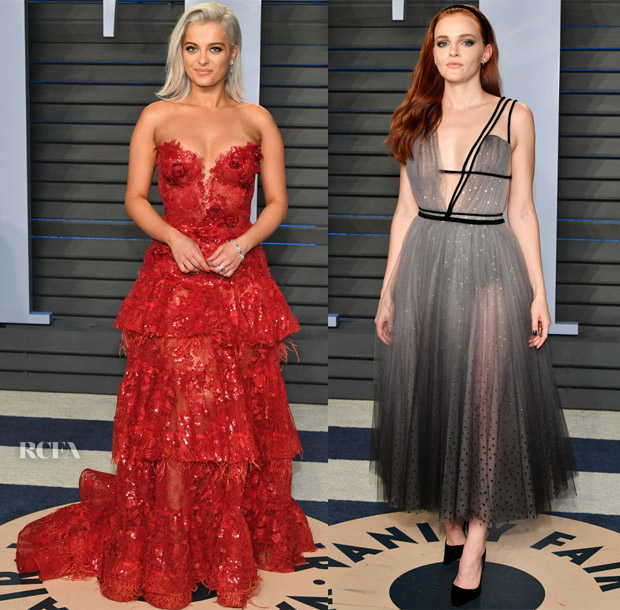 Bebe Rexha: Lace, embellishment, and tiered layers meant that this NEDO by Nedret Taciroğlu fell a bit on the pageantry side, especially with her heavily bronzed approach.

Madeline Brewer: A modern princess moment was achieved with this Georges Chakra Fall 2017 Couture ankle-grazing frock that had its own magic in the asymmetrical bodice and twinkle of sequins. A headband and Jimmy Choo ‘Romy’ pumps completed this fresh take on the fairy-tale style. 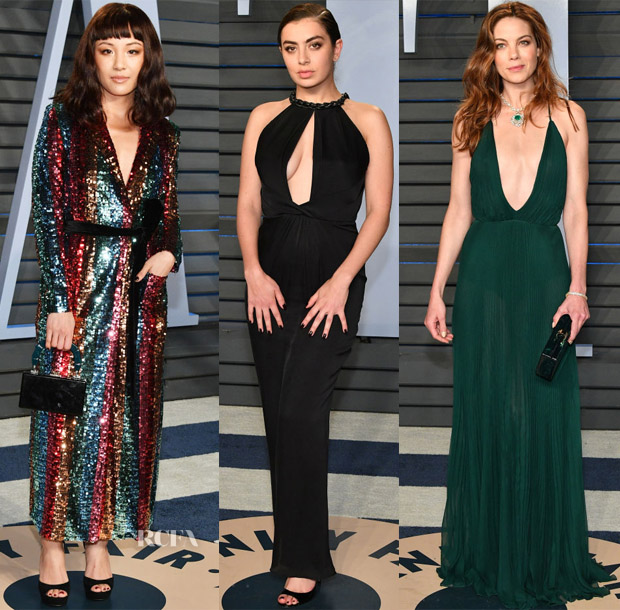 Constance Wu: There was no sequin, nor shade, left to the side in this Markarian Pre-Fall 2018 wrap dress styled with Alexis Bittar jewelry and Sam Edelman shoes. Magpies everywhere will be dazzled.

Charli XCX: The entertainer left her wilder style behind, and offered up a thoroughly sophisticated approach for the Oscars in this Armani ensemble.

Michelle Monaghan: The emerald colour of this Reem Acra flowing gown was its main calling card, to which her striking statement necklace only further enhanced. 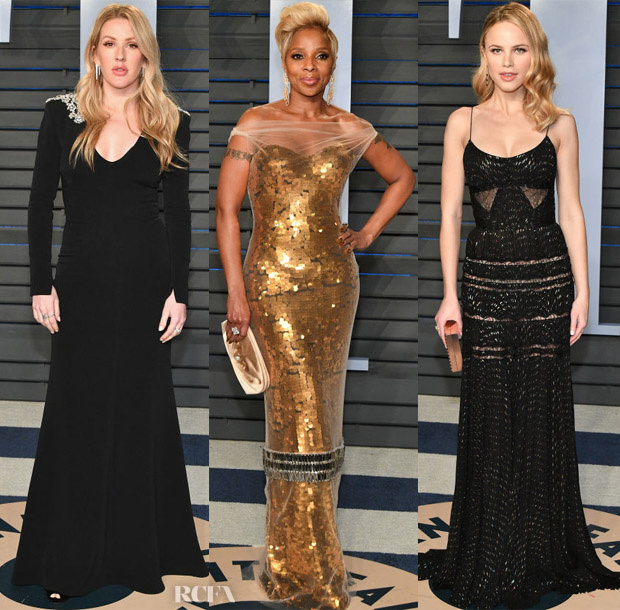 Ellie Goulding: I would have much preferred to see Ellie’s hair up off her neck, given the bold shoulder of this Jenny Packham Fall 2018 black gown.

Mary J. Blige: Her third look of the night had her returning to the Vera Wang Collection for this golden, coppery moment that referenced the Oscar trophy itself. While it was striking, it was my least favourite of her looks as I found both the gauzy overlay and the mid-calf embellishment to be a bit distracting. 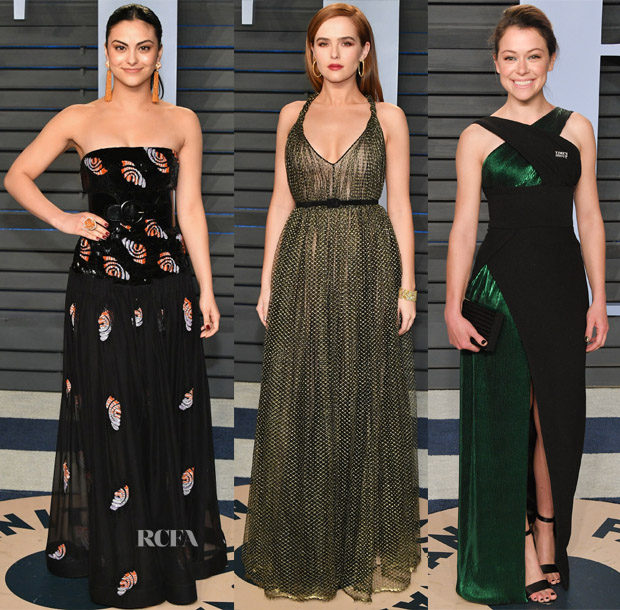 Zoey Deutch: You wouldn’t think this Christian Dior black and green lurex fishnet long dress would be so aging, but when styled with her heavy makeup and hoop earrings, Zoey matured quite a bit in this look.

Tatiana Maslany: Even though she echoed the green hue of this Rasario criss-cross gown in her eye makeup, I still got the feeling that her beauty look remained unfinished. She accessorised with Aquatalia sandals and a Lee Savage clutch. 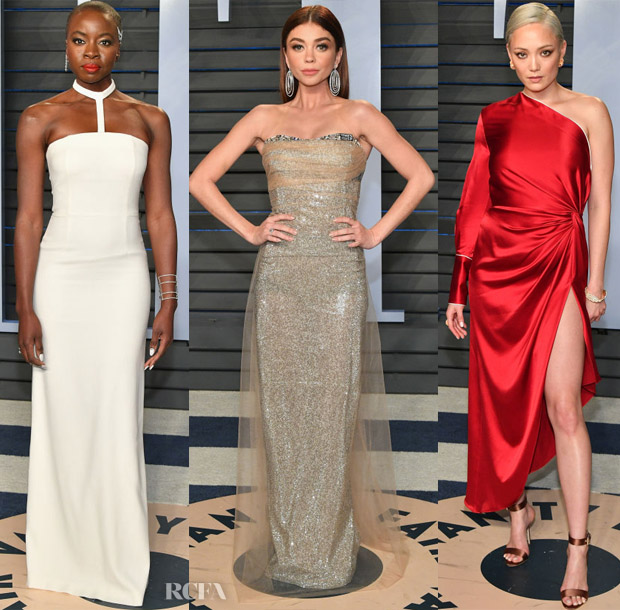 Danai Gurira: After the Oscars, the ‘Black Panther’ star cut a strong yet simple profile in her Gabriela Hearst Fall 2018 gown that celebrated the designer’s attention to tailoring.

Sarah Hyland: Sarah donned a glittery Ermanno Scervino gown that was softened by a whiff of rose-gold tulle and styled with Lorraine Schwartz jewels. But, as with Zoey, the combination of dress, earrings, and heavy makeup made this a rather mature look for the young starlet.

Pom Klementieff: As per, she commanded attention in this Monse Pre-Fall 2018 fiery-red frock that wasn’t so ground-breaking, but she owned it from head to toe and gave it far more fire. I think I would have preferred red Brian Atwood sandals, though, instead of this bronze-y hue. 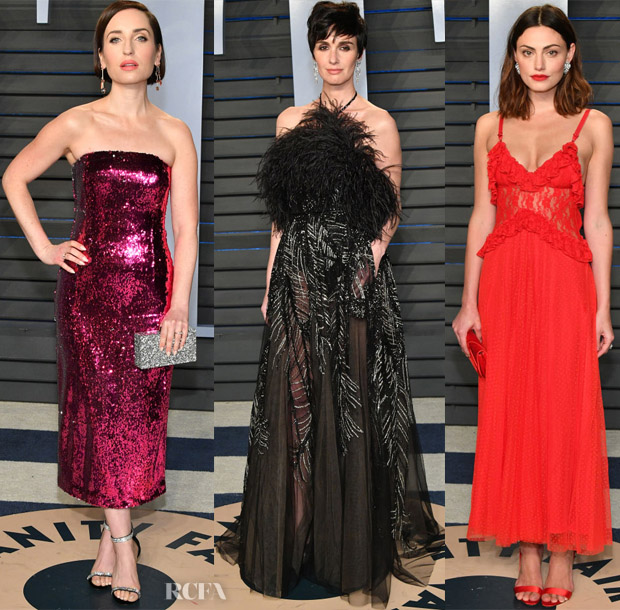 Paz Vega: After going floral for the Oscars, Paz changed directions with this Elie Saab Spring 2018 Couture creation that delivered no less drama but in distinctly different ways with the feathered bodice and embellished, sheer elements.

Phoebe Tonkin: I do love seeing this red-hot hue repeated on several occasions, and I think it fit the bill so well in this Christopher Kane Spring 2018 ruffled, lace point d’espirit frock that would have appeared too boudoir-like in a softer shade. CHANEL Fine Jewelry and matching Brian Atwood sandals rounded out the look. 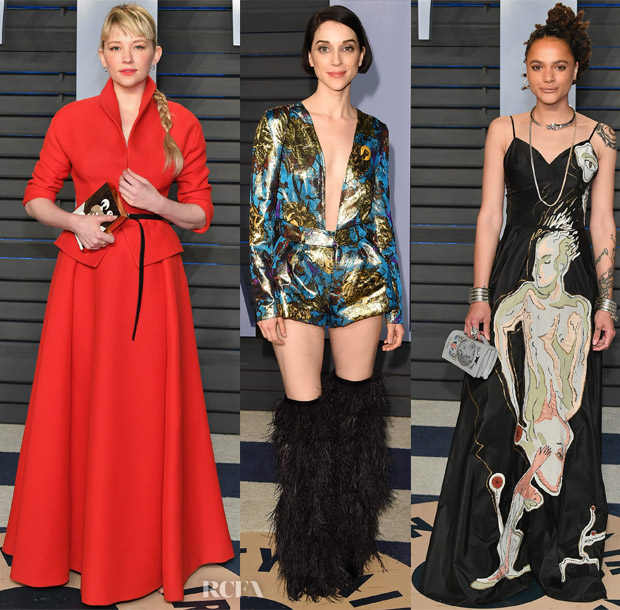 Haley Bennett: When I saw Haley in this Christian Dior Haute Couture red wool crepe skirt suit, styled with a Dior metal clutch, the first thing that came to mind was this look was far too mature for her. You might really think the grass was greener with her previous gown of the night. Plus, I don’t understand the addition of the hair braid.

St Vincent: She didn’t wear the feathered Saint Laurent boots in her first Oscars red-carpet look, but she decided to implement them here with this Saint Laurent shiny, patterned romper. Again, I think the ensemble was reflective of her quirky style, but it was inappropriate for the event.

Sasha Lane: I wasn’t a huge fan of this quirky Christin Dior black printed silk taffeta gown. But, it was overcooked for sure when she added the embellished Dior clutch, necklaces and cuffs.