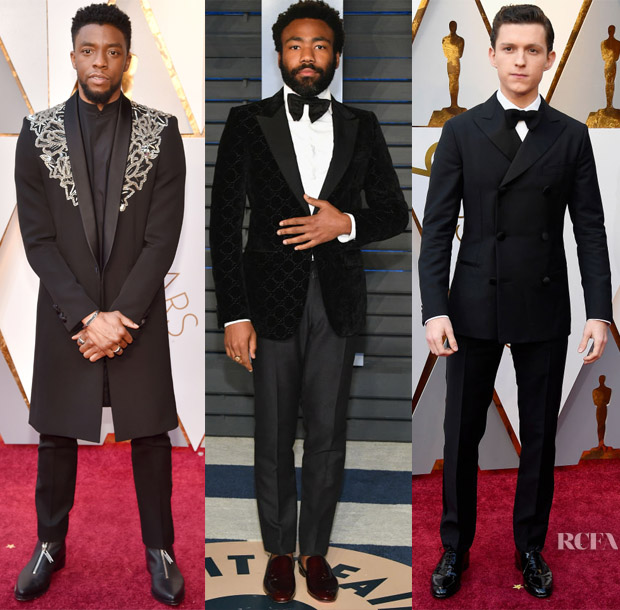 Many of the men brought their A game to the 2018 Oscars and Oscars parties, including the Vanity Fair Oscar Party and Elton John’s AIDS Foundation Academy Awards Viewing Party on Sunday (March 4) in California.

Chadwick Boseman: The ‘Black Panther’ star continued his reign of sartorial power in this Givenchy Haute Couture suit that was inspired by a full look in the Spring 2018 collection. However, I love how he made the long, embellished jacket his own—sleekly styling it with black shirting and trousers and the zipper-accented shoes.

Donald Glover: This Gucci tux such a handsome-luxe approach with the velvet jacket taking it to the next level in partnership with the relaxed-suave appeal of the slipper shoes. A David Yurman ring completed the look.

Tom Holland: Sometimes double-breasted jackets can come across as a bit contrived, but I love how Tom wore this Hermès suit so sharply. It was a standout on the Oscars red carpet with his Piaget watch adding that final touch. 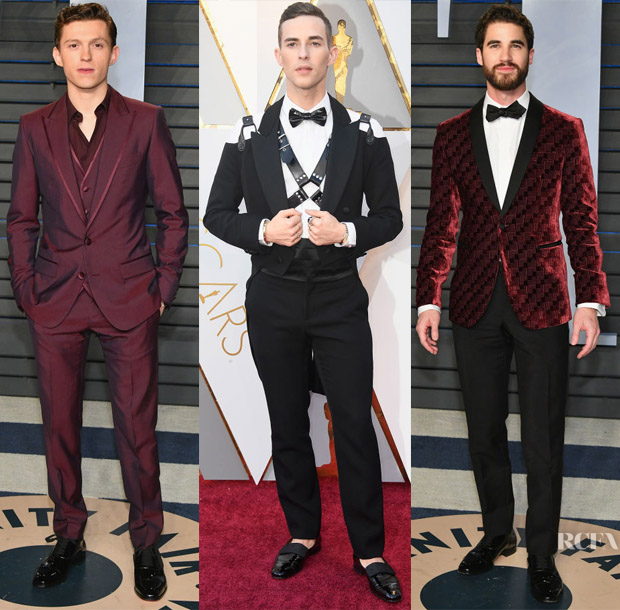 Tom Holland: Tom again impressed me at the Vanity Fair party, changing into this Dolce & Gabbana aubergine three-piece suit styled with Christian Louboutin shoes. It was the right decision to skip the tie, as it created such an effortless cool factor that was still plenty dressed up.

Adam Rippon: The Olympic ice skater channeled an adventurous side in this Moschino by Jeremy Scott tuxedo that pushed the envelope with its harness accoutrement.

Darren Criss: I like how this burgundy velvet Emporio Armani jacket offered a different variation on the classic tuxedo. 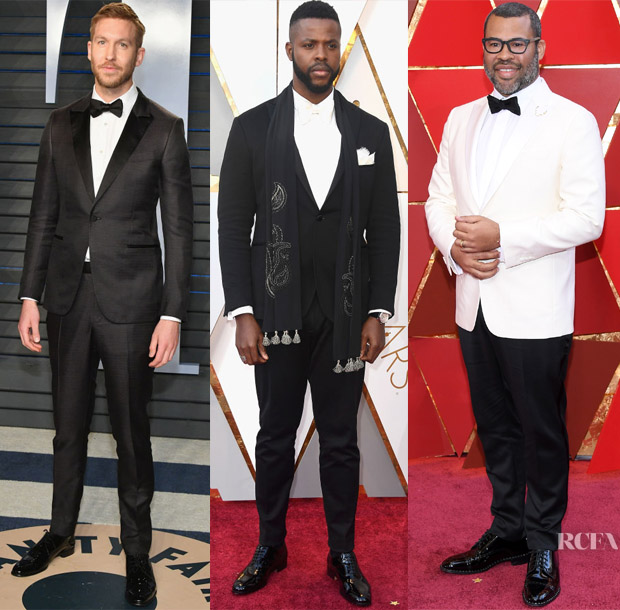 Calvin Harris: You can’t go wrong with the classics when they look as polished as this Ermenegildo Zegna Couture suiting and Chopard cufflinks.

Winston Duke: A scarf doesn’t always make the cut on the red carpet, but Winston made the case for it in this Etro tux, which I also liked for the white-on-white bow tie and dress shirt. Tod’s shoes completed the look. 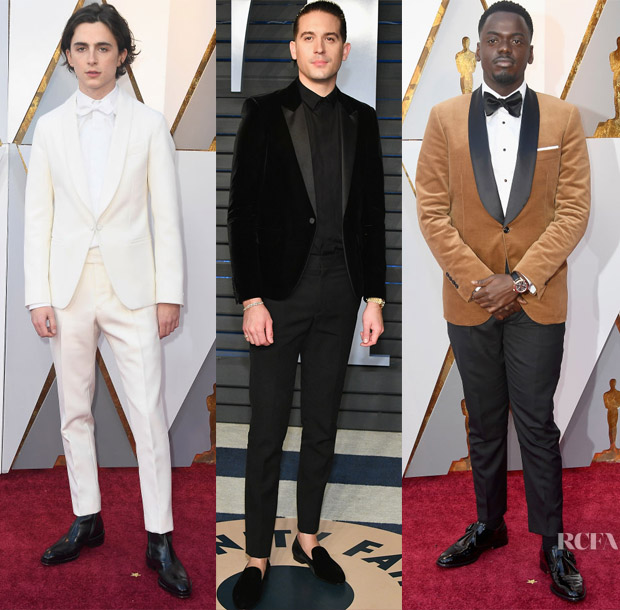 Timothée Chalamet: Speaking of white, it was a total white-out for the young ‘Call Me By Your Name’ actor—aside from his shoes—in this Berluti tailoring styled with a Jaeger-LeCoultre timepiece. Does anyone else, though, have some pause about the slightly mismatched white shirt and creamier suit?

G-Easy: The rapper cut a cool profile in this Saint Laurent by Anthony Vaccarello monochromatic moment. I loved how he balanced that formality with the bracelets and socks-less slippers for a bit of rebellious style personality that was appropriate for the Vanity Fair party.

Daniel Kaluuya: The camel colour of this Brunello Cucinelli tuxedo jacket wasn’t my favourite, and I think the whole look suffered a bit in the fit. Tod’s shoes and Montblanc cufflinks accessorised the ensemble. 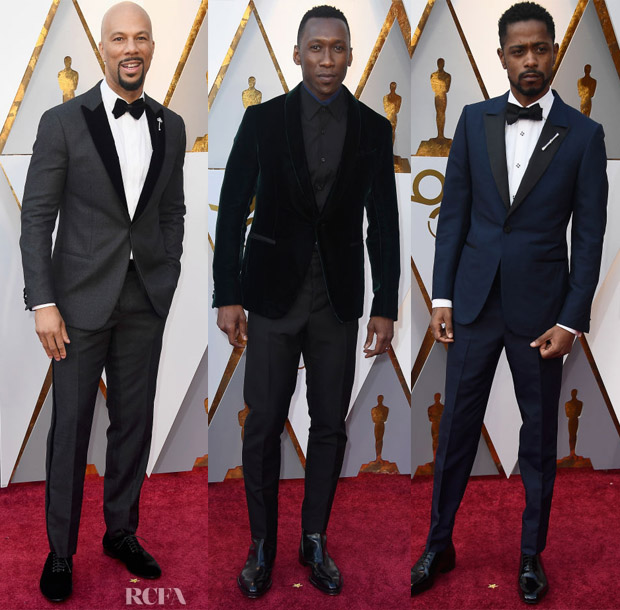 Common: He never fails to impress with his sleek sense of polish, as was again witnessed in this Armani tux. The darker, contrast labels added a richness of dimension here.

Mahershala Ali: I’m glad the jacket of this all-black Berluti look offered a velveteen texture to add some dimension to the monochromatic look.

Lakeith Stanfield: I was immediately captivated by this Ermenegildo Zegna Couture contrast-lapel tuxedo for its rich midnight-navy colour along with its impeccable fit and stylized components—like the decorative shirt buttons. The details are everything here. 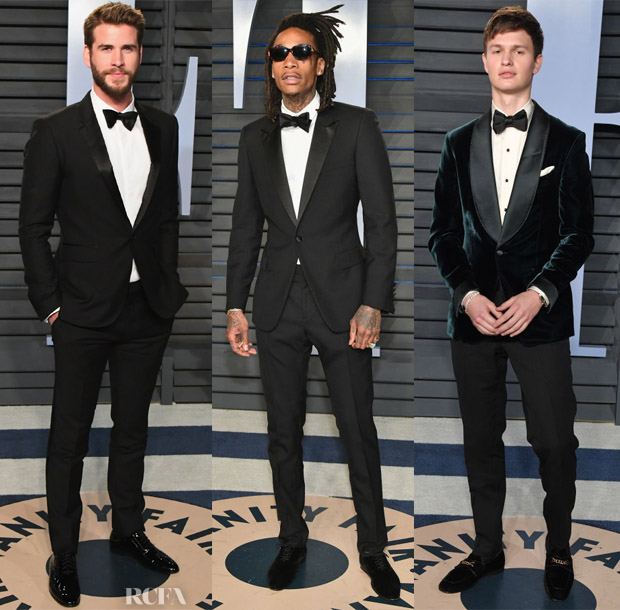 Liam Hemsworth: Liam kept it classic and elegant in a black Burberry tux.

Wiz Khalifa: I was very much applauding the rapper’s formal turn in this Dior Homme tuxedo that he wore so very well.

Ansel Elgort: The proportions of this Tom Ford look didn’t compute for me. The fit of both the velvet jacket—not to mention the clunky, oversized lapels—and baggy trousers was just odd. 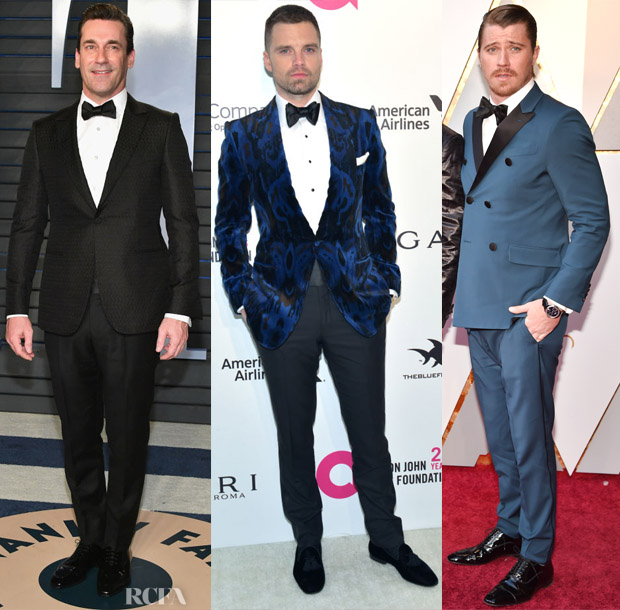 Jon Hamm: Also in an Ermenegildo Zegna Couture tux, Jon didn’t seem so comfortable in this tailoring. But, the stiffness could have just been his pose.

Sebastian Stan: Velveteen treatments were clearly a big trend for the men at the Oscars, with Sebastian taking it a step further with the patterned, blue jacket of this Tom Ford tuxedo.

Garrett Hedlund: Maybe it was the mustache throwing me off, but this double-breasted Prada suit looked like the actor was getting ready for retro prom night. 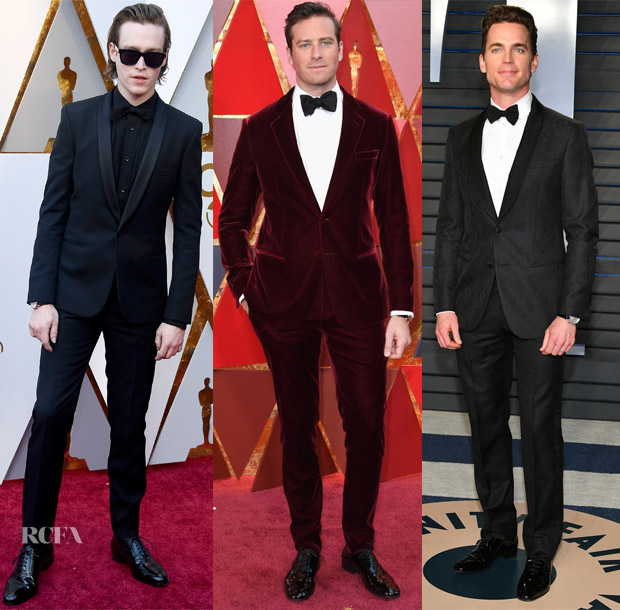 Caleb Landry Jones: Shades always give a red-carpet look a bit of a nonconformist bent that went right along with the slightly rocker edge of this Saint Laurent slim-fitting suit.

Armie Hammer: A distinct richness of form permeated this Giorgio Armani Made to Measure bordeaux velvet two-button notch lapel evening suit—although I will always favour Armie in blue because it brings out his striking eyes.

Matt Bomer: I feel like this Giorgio Armani tux was a bit of a safe afterthought for Matt. 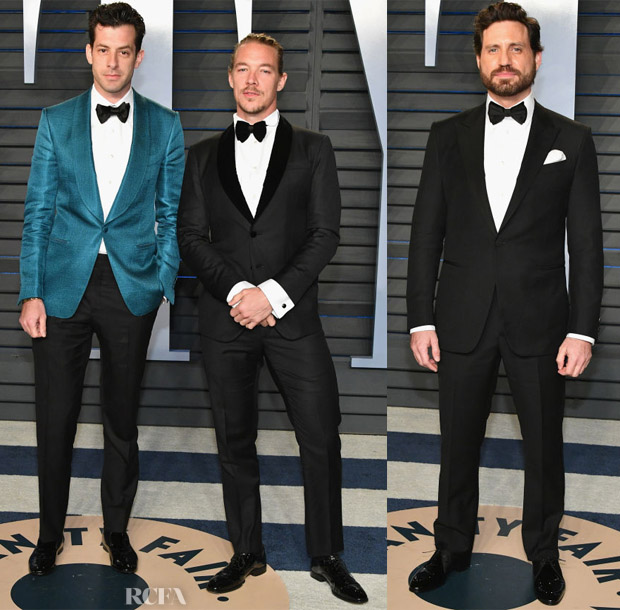 Mark Ronson: The satiny sheen effect of this Tom Ford teal jacket is a tricky sell for the red carpet as it shows a world of creasing sins.

Diplo: Mark upped his cuff game with this Giorgio Armani tux that took a body-con approach to tailoring as it was certainly closely fitted to his muscular form.

Edgar Ramirez: Edgar made sure to finish his traditional black tux with the added punch of Montblanc cufflinks. 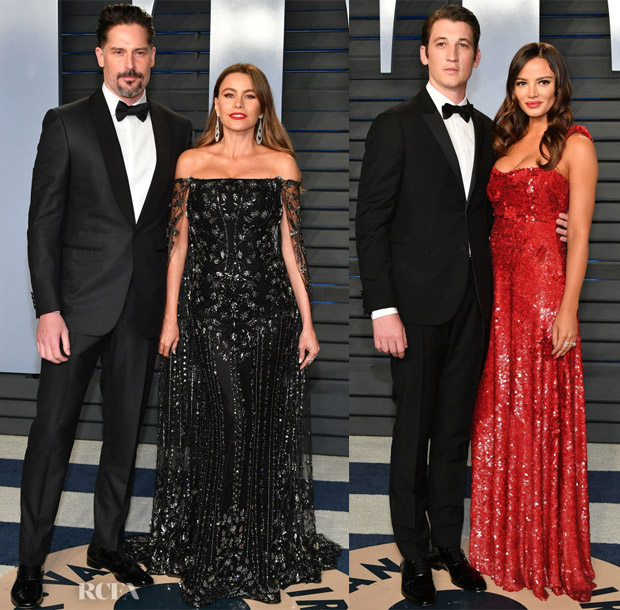 Joe Manganiello: Joining Sofia Vergara at the Vanity Fair Party, Joe was fetching in a well-tailored Ermenegildo Zegna Made to Measure tuxedo.

Miles Teller & Keleigh Sperry: Dapper was the first word that came to mind when I saw Miles in this Valentino tux. It made a great union with Keleigh’s sizzling, sparkling Valentino Pre-Fall 2017 embellished gown. 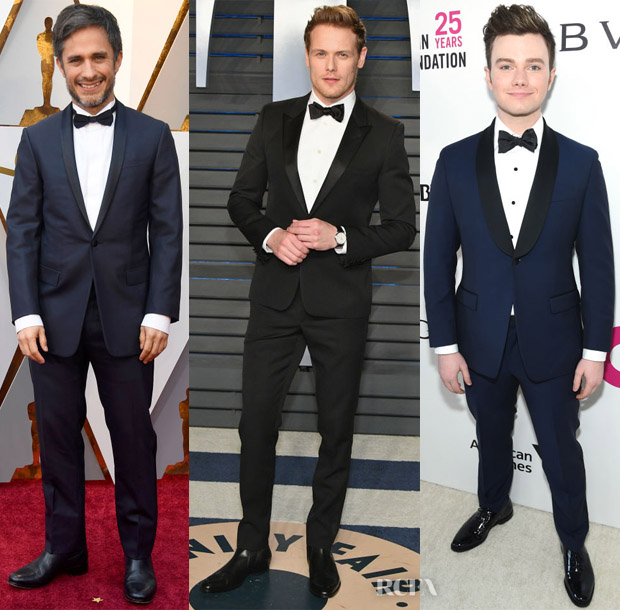 Gael Garcia Bernal: The cuffs were too long and the sleeves too short of this Dior Homme tux, and it compromised the rest of the look.

Sam Heughan: The Scottish actor suited up in a Saint Laurent tux with Montblanc cufflinks to complete its sophisticated yet modern edge.

Chris Colfer: We didn’t see a lot of navy at the Oscars, but the colour served Chris well in this striking Brooks Brothers statement at Elton John’s party.