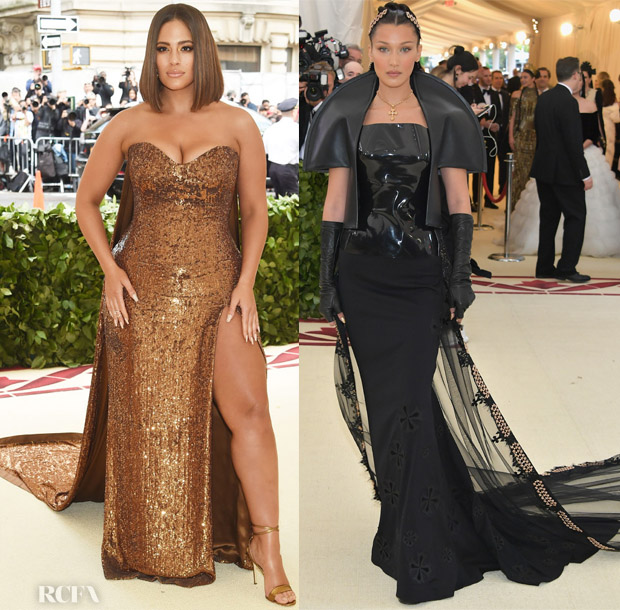 Naturally, the models were out in force for the 2018 Met Gala on Monday (May 7) in New York City. Here’s what these ‘heavenly bodies’ had on.

Bella Hadid: I’m sure many will be raising their hands in praise that Bella opted for something a bit more covered than her naked bodysuit from last year’s Met Gala. This custom Chrome Hearts x Gareth Pugh design riffed on sinner and saint with the dark glamour of the latex corset and sculptural, villainous cape and fingerless gloves. This would have been all bad-girl were it not for the cross necklace and cross-embroidered veil that trailed behind her. 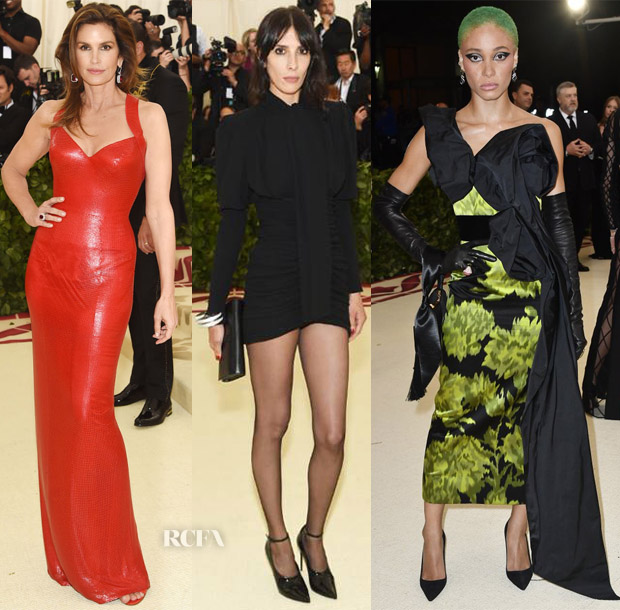 Cindy Crawford: The supermodel shut down the carpet in one fell swoop with this red matte chain-mail Atelier Versace gown. I wasn’t surprised to learn that this was custom-made for the supermodel, as it fit her impeccably. It also alluded to her iconic Versace Academy Award moment in 1991 with then-boyfriend Richard Gere at age 25—and, at 52, she is just as ravishing. Sure, there wasn’t much to do with the theme here aside from the crimson hue, but when you look this good, who cares.

Jamie Bochert: Like the other Saint Laurent looks we saw last night, this one followed the LBD form that was at best forgettable on such a night as this. 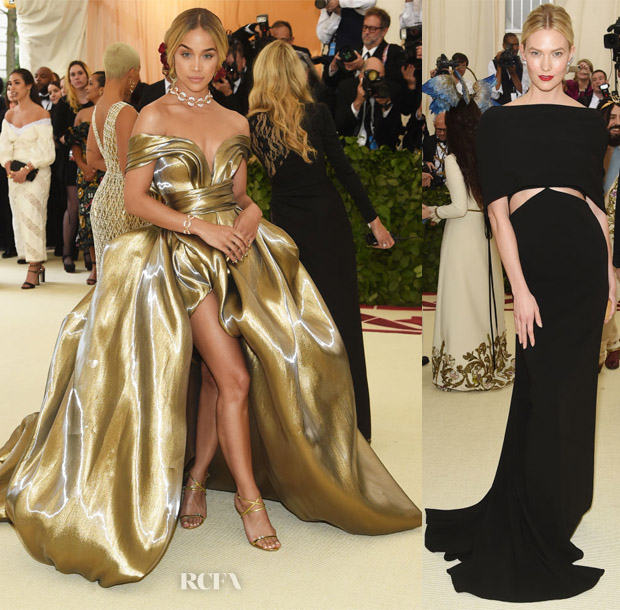 Jasmine Sanders: I was floored by the opulent, show-stopping quality of this gown, which was one of several from H&M that we saw at the Met Gala this year. The undulating waves of gold lamé were indeed celestial with a certain hypnotic quality. I love that she also wore real red roses woven throughout her long braid. 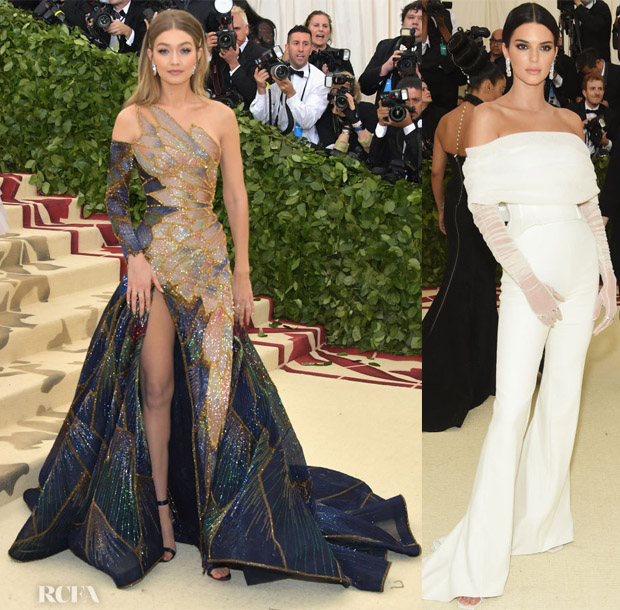 Gigi Hadid: Whereas her sister Bella walked on the dark side, Gigi offered a more heavenly offering in this scintillating Atelier Versace gown decorated with a feathered effect—angel wings, naturally. She accessorised with Christian Louboutin ‘Jonatina’ sandals and Lorraine Schwartz jewels.

Kendall Jenner: Looking every bit like a modern angel, as was the goal, the model impressed in an off-the-shoulder ruched top styled with sheer gloves and matching trousers, designed by her friend Off-White creative director Virgil Abloh. The ‘long train’ pants were meant to symbolize angelic clouds, but I was simply swept up in the striking yet delicate purity of the look. 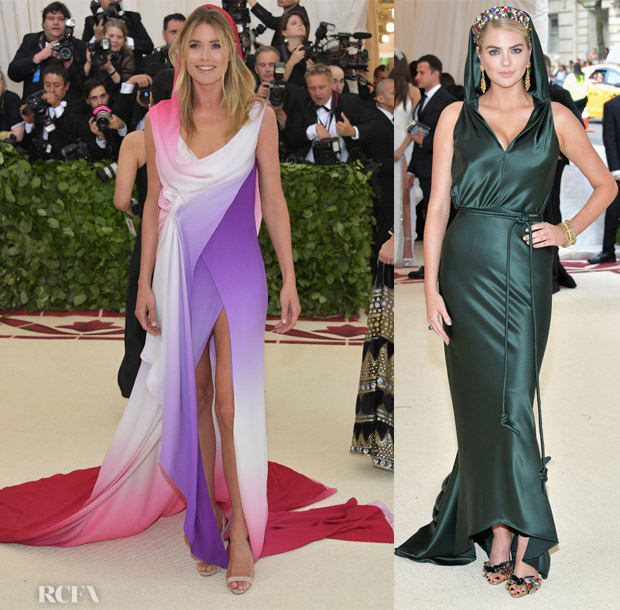 Doutzen Kroes: This Sies Marjan moment was what happens when tie-dye and ombre meet at Confession…

Kate Upton: The satiny fabric of this Zac Posen gown didn’t really do it any favours in fit or execution. But I do like the radiance of the multi-hued gemstone headpiece, as that attempted to save the dress. 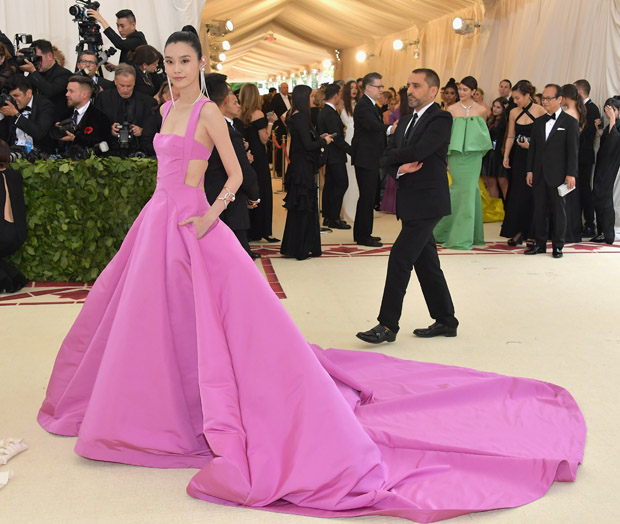 Ming Xi: This bubblegum-pink Atelier Prabal Gurung confection was another Barbie dream and a Met-worthy extravaganza, but even with the pearl earrings, I couldn’t find much of the theme here. 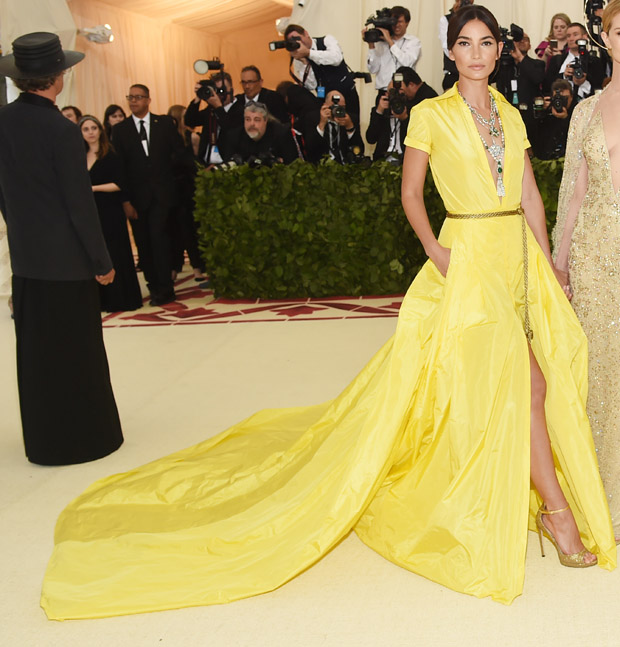 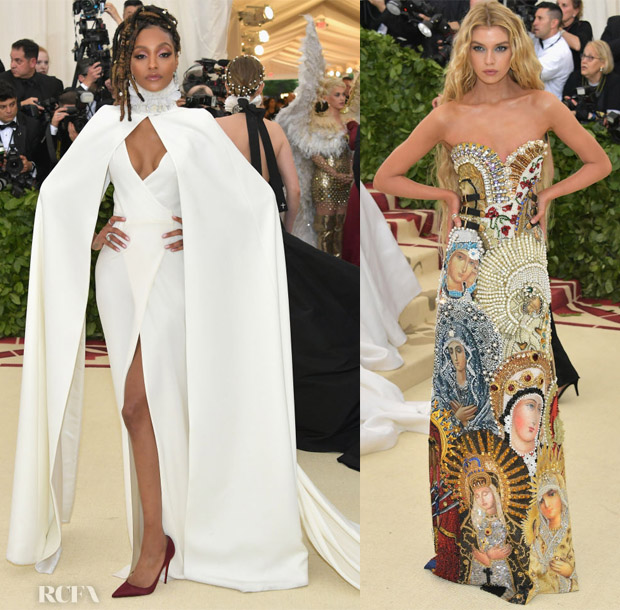 Jourdan Dunn: This Diane von Furstenberg ‘Queen of Sheba’ cape gown was made all the more dramatic with the embellished neckpiece and Jourdan’s braided ’do.

Stella Maxwell: There would be no guessing which Met Gala she was dressing for, as this Moschino gown quite literally depicted Renaissance-influenced painterly images of the Virgin Mary. 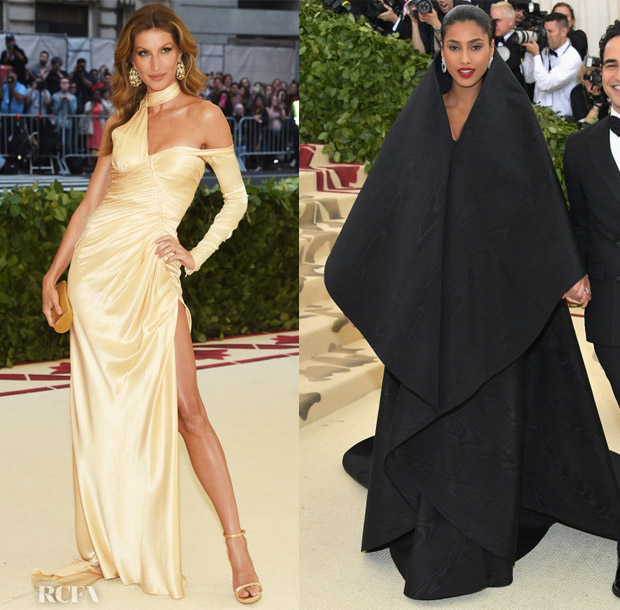 Gisele Bundchen: What I most appreciate about the supermodel’s gold Versace gown was that the custom design was made of 100-percent sustainable silk-satin. A pair of Versace sandals completed the softly thematic look that could have easily translated on any red carpet.

Imaan Hammam: I know this cocoon-like Zac Posen monastic robe design may not be everyone’s cup of tea. But, I was thoroughly intrigued by the massive cape and all its mysteries. Plus, I like the whiff of Chopard jewels and the blood-red lip to top it off. 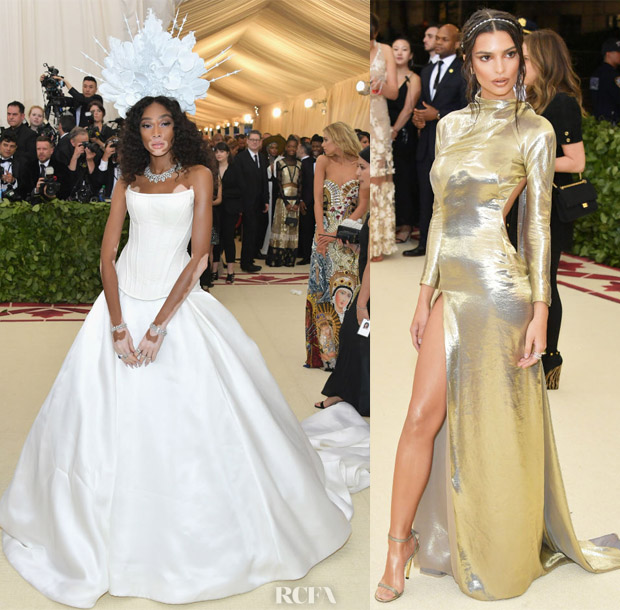 Winnie Harlow: We saw a few wedding gowns, but Winnie’s Tommy Hilfiger one by far took the cake with the extravagant headpiece a glorious work of art. The bigger the headpiece, the closer to heaven, clearly.

Emily Ratajowski: Sizzling in a liquid-gold Marc Jacobs gown styled with Messika jewellery, Emily flaunted her own bod with the seductive slit and the scoop back. 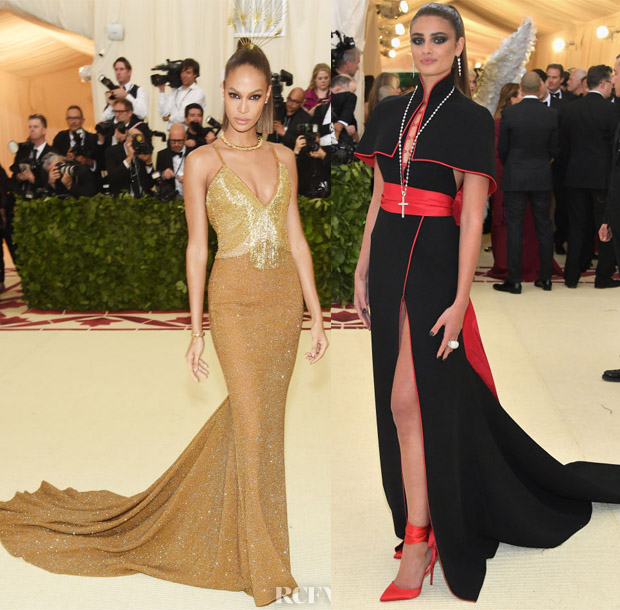 Joan Smalls: The golden-goddess aesthetic was clearly a popular one, with Joan accessorizing her Tommy Hilfiger gown with an extra-tall halo effect.

Taylor Hill: We had Jourdan in Diane von Furstenberg’s ‘Queen of Sheba’ gown, and Taylor rocked the designer’s ‘Cardinal Sin’ dress that toyed with elements of sin and saintliness in the cross rosary beads, vampy makeup, and dramatic black and red palette. 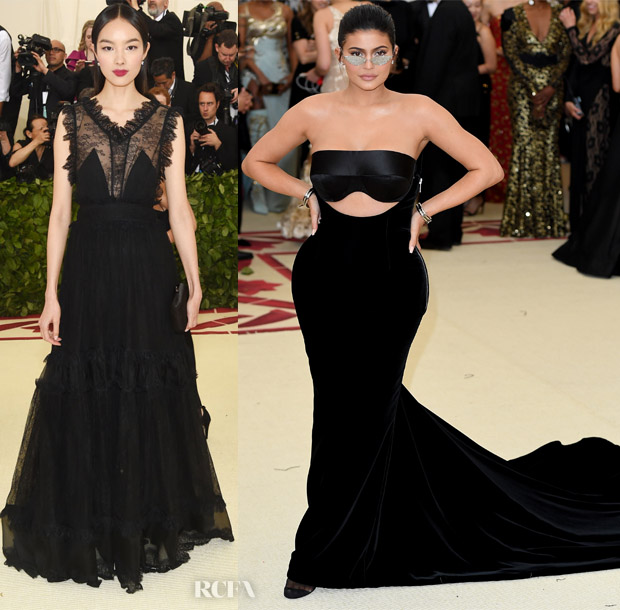 Fei Fei Sun: The model looked lovely enough in her solemn black lace dress by Tory Burch, but it was forgettable at best.

Kylie Jenner: We saw the wing motif in multiple forms, but Kylie took to wearing hers underneath her eyes for a rather, eh, progressive addition to this black hourglass Alexander Wang gown styled with additional Chopard jewels. 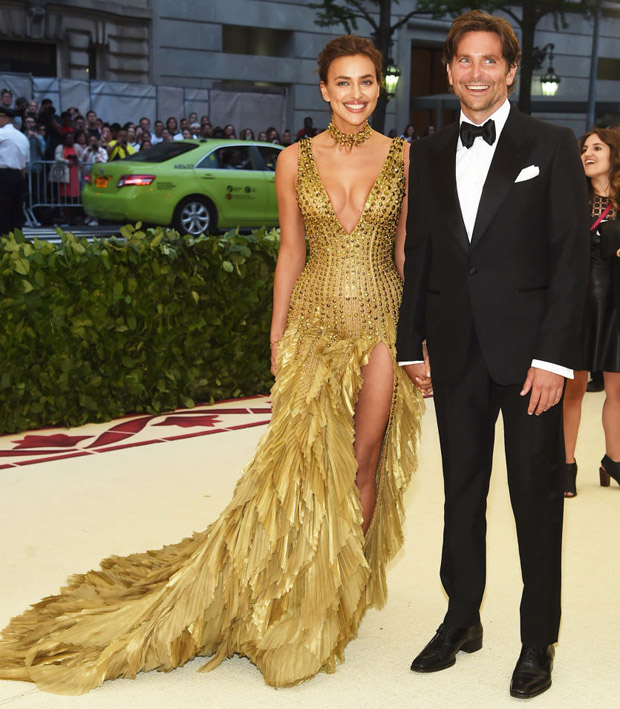 Irina Shayk: While it certainly checked the box on the theme with the golden embellishment and the feathery, angelic skirt, this Atelier Versace plunge gown seemed a bit familiar for the model, as it’s a seductive silhouette we’ve seen so many times before.

Bradley Cooper: The actor’s solution to the night’s theme was to keep it classic in a black Tom Ford tux. 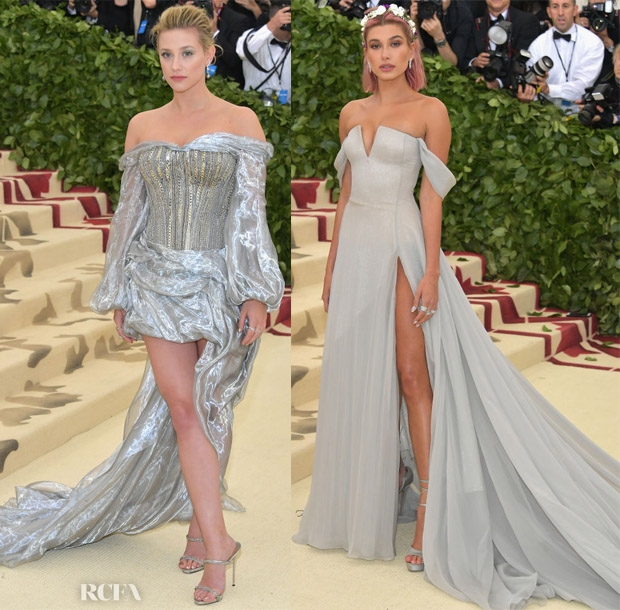 Lili Reinhart: Here we have yet another H&M design, this one clearly inspired by medieval style mixed with the modern, diaphanous shimmer of the billowy sleeves and skirt.

Hailey Baldwin: I have to say I was impressed by the restrained elegance—by Hailey’s standards—of this Tommy Hilfiger slit-to-there chiffon gown. It was a sweeter moment for her, complete with the white flower crown atop her pink locks.