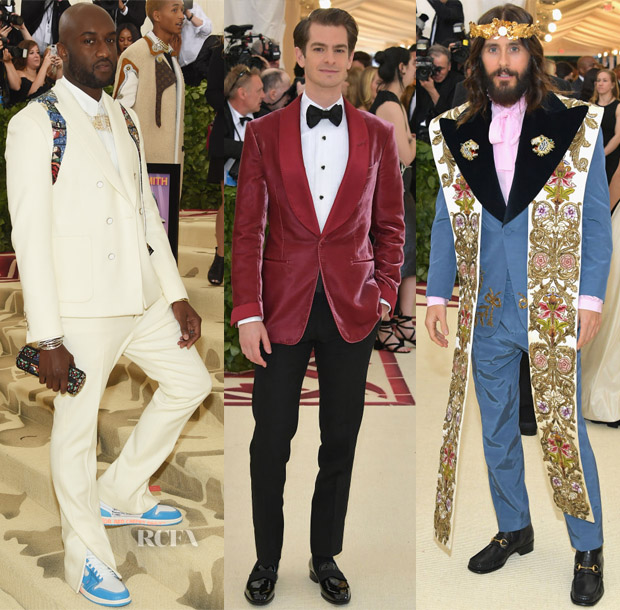 The men always have a bit more of a challenge when it comes to thematic dress, but here’s how they did at the 2018 Met Gala on Monday (May 7) in New York City.

Virgil Abloh: Right out of the gate, I loved seeing Louis Vuitton’s Artistic Director of Men’s Collections wearing this preview of the upcoming Louis Vuitton Spring/Summer 2019 men’s collection. Bonus points that the creamy-white design played to the theme—with an urban twist in the sneakers.

Jared Leto: If there would be anyone to fully dress to theme, it would be Jared. In head-to-toe Gucci, he flaunted this custom design that offered up his interpretation of a saintly crown paired with priestly embroidered panels. The flamboyant suit itself we could have likely seen him in any day of the week. 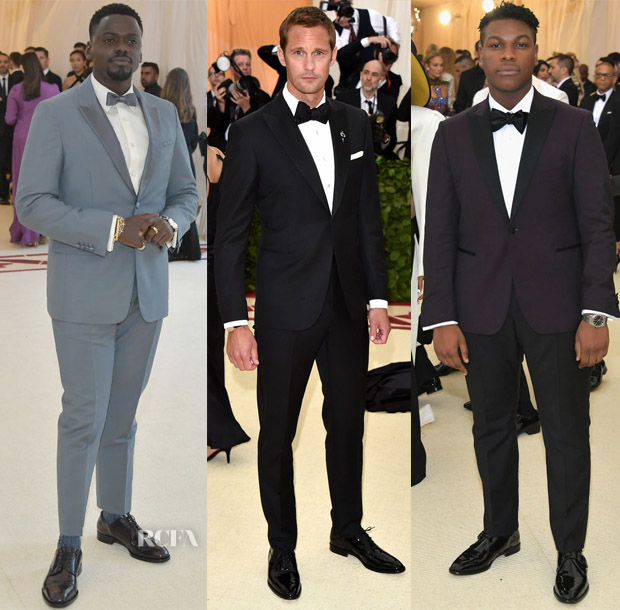 Daniel Kaluuya: It was the blue hue of this Prada suit that likened itself to a soft interpretation of the theme with David Yurman cufflinks to complete the look.

Alexander Skarsgard: No costume tendencies here, as the handsome actor erred on the side of classic in a Brioni tux, Tod’s shoes, a Chanel watch, and David Yurman cufflinks.

John Boyega: Also not one to go full theme ahead, John did introduce a rich aubergine hue with this custom Michael Kors Collection design. 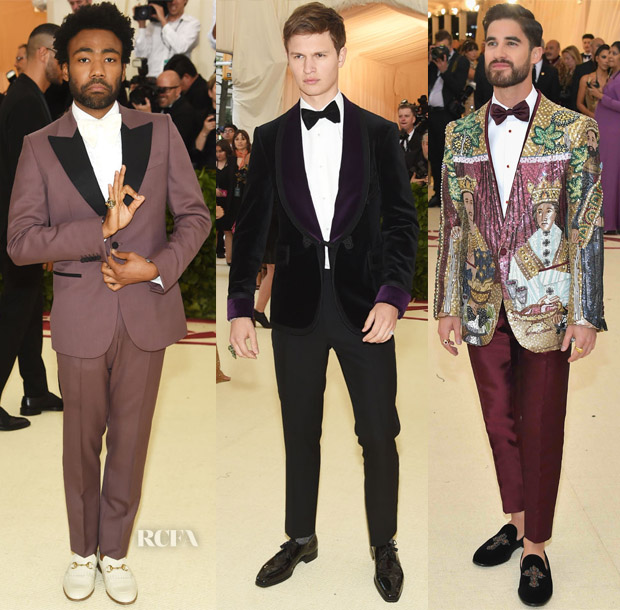 Donald Glover: Hand symbols aside, I was getting more of a retro than religious vibe in this custom Gucci mauve wool heritage tuxedo. 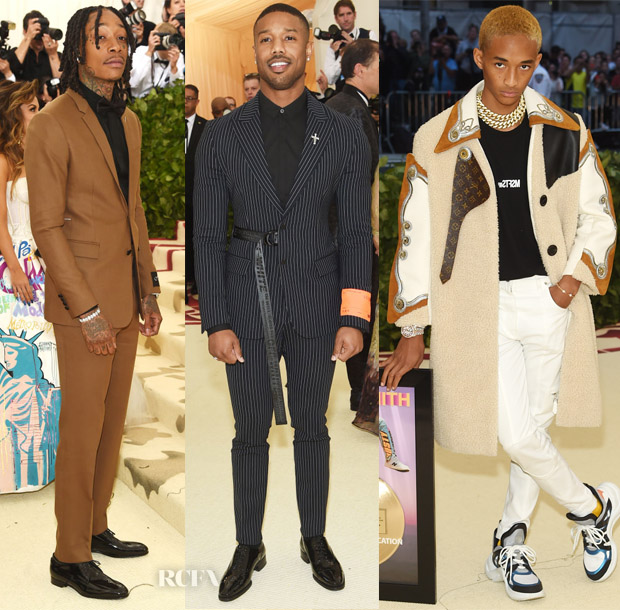 Wiz Khalifa: The rapper was refined in a Dior Homme tan suit that didn’t encompass much to write home about.

Michael B. Jordan: Although the thematic reference was more subdued here, I love the style-forward mood of this Off-White c/o Virgil Abloh pinstripe, sash-cinched design with David Yurman jewels and a cross lapel pin to finalize the religious spirit. 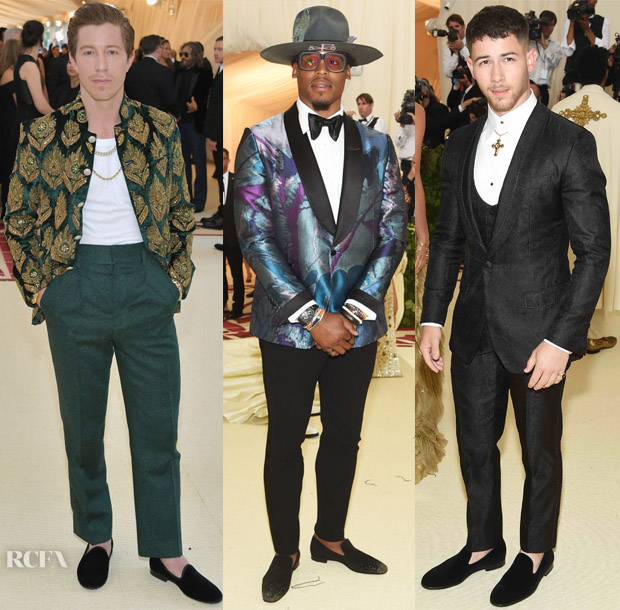 Shaun White: Opting for beaded foliage, Shaun was dressed in an Etro design. But, from the chains to the white T-shirt, the high-waist pants and slippers, it was just putting off the wrong vibes.

Cam Newton: The American football player is known for having a unique sense of style, and that was certainly proven with this Tom Ford colourful concoction of a tuxedo that was perhaps supposed to be celestial in its milky way effect. He generally favours a wide-brimmed hat, so the rakish topper was to be expected. It was the shades that put another layer of zany on the outfit.

Nick Jonas: I like how polished Nick’s Dolce & Gabbana Alta Sartoria look was, as it artfully echoed monastic style without going overboard. 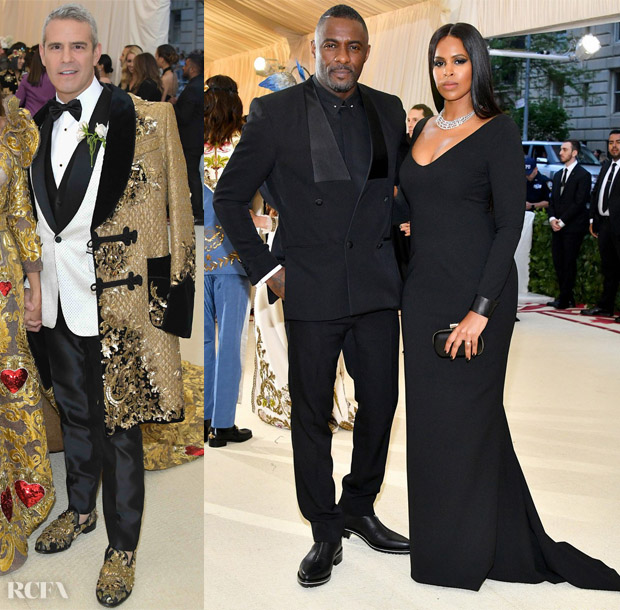 Andy Cohen: Leave it to the TV host to slay a theme, and that he did in this Dolce & Gabbana Alta Sartoria look that would have just been a white tux were it not for the gold-laden robe and equally embellished slippers. 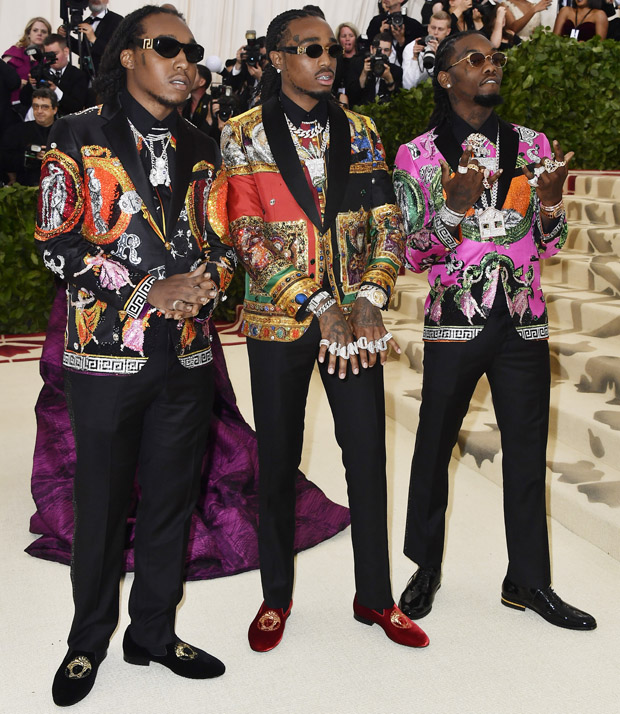 The Migos: An homage to the evening’s co-hosts Donatella Versace, the rappers made for a striking trio in coordinating custom-made, Atelier Versace looks consisting of iconic Versace printed tuxedos entirely encrusted with Swarovski crystals. If you’re wondering where the theme came in, it was with the Renaissance-inspired iconography on the jackets. Versace shoes and Versace gold chains completed the elaborate ensembles.

Who Was Your Best Dressed At The 2018 Met Gala?