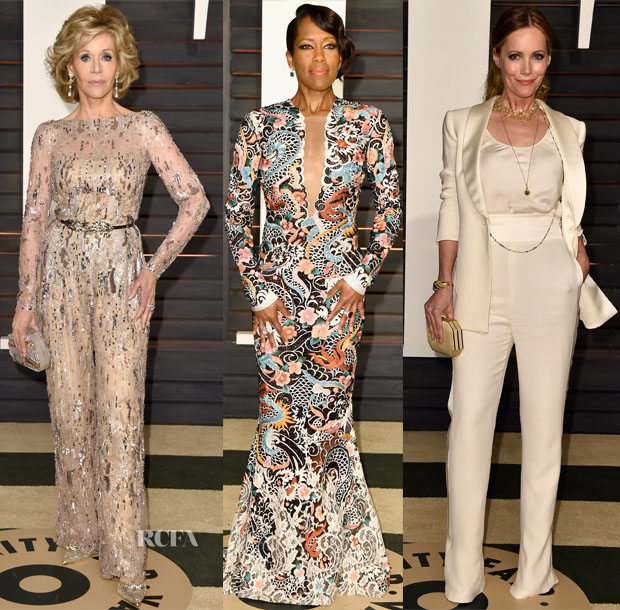 Here is an quick roundup from the 2015 Vanity Fair Oscar Party, which took place on Sunday (February 22).

Jane Fonda: The actress shows us that Zuhair Murad doesn’t always spell tacky. This Spring 2015 Couture jumpsuit is divine and she is working it like no other. Kudos to her. Jimmy Choo ‘Creole’ pumps and a Rauwolf clutch accessorized her look.

Regina King: This Nicolas Jebran gown won’t be to everyone’s taste, but I love the artful colours on this design. I don’t, however, like the illusion neckline. Not close enough to her skin tone.

Leslie Mann: Like Naomi Watts, Leslie went the white suiting route, layering up with a selection of gold Neil Lane jewels the look probably didn’t really require so much of. 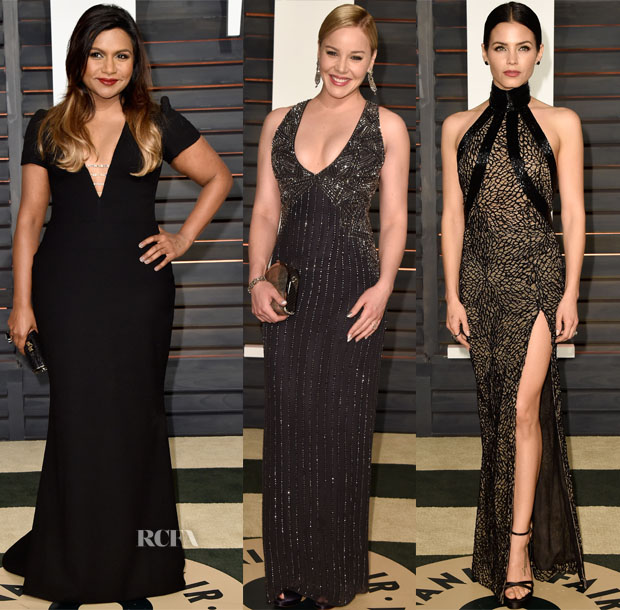 Mindy Kaling: The actress wears colour 364 days of the year, choosing Oscar night to wear black. Once again, Salvador Perez does her proud in this form-fitting design accented with diamante detailing.

Abbie Cornish: The Australian actress wore a Jenny Packham Resort 2015 gunmetal-grey gown, which, despite the Gatsby influence and embellishments, read dull and rather boring.

Jenna Dewan Tatum: I think the actress should’ve stuck with her first Zuhair Murad gown; this rather uninspiring Fall 2014 Couture design isn’t a patch on it. 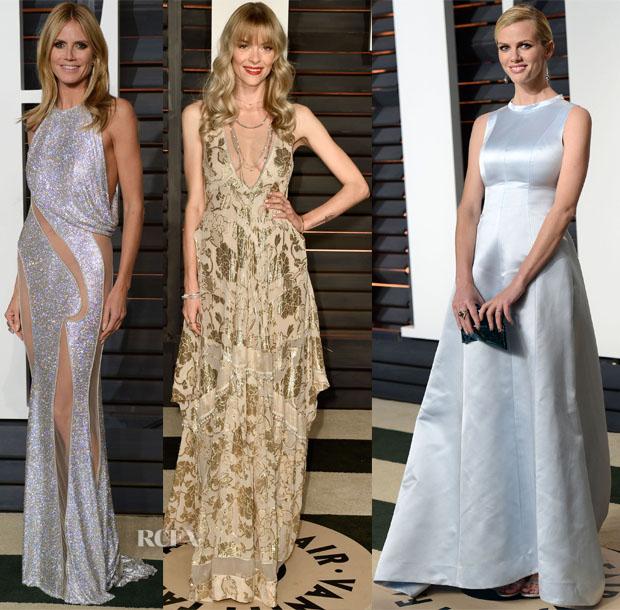 Heidi Klum: Here we have Heidi Klum in another Atelier Versace dress that I don’t like. Next.

Jaime King: Perhaps it’s the new hairstyle, the gold colour (which is washing her out) or that plunging neckline, but I couldn’t get on board with Jaime’s Altuzarra maternity look.

Brooklyn Decker: I guess her silvery blue Katie Ermilio gown is pretty enough, but I couldn’t get past the creases. There should really be a steamer in place at the start of these red carpets. I’m not sure about the dark metallic-blue Anya Hindmarch clutch with this look, but I do love those earrings. 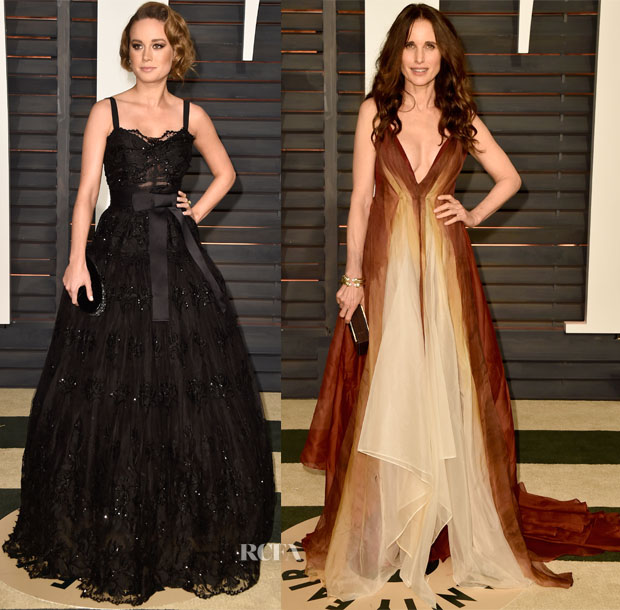 Brie Larson: Not often one to do high glamour, I love the change of pace. This grand Dolce & Gabbana gown was effortlessly styled with an Edie Parker clutch and retro waves. 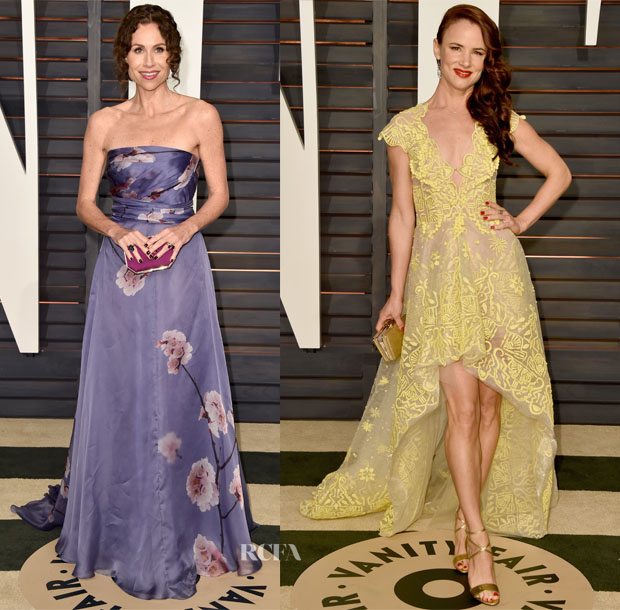 Juliette Lewis: I love this Stella Nolasco dress for being so summery and ultra-feminine. It totally stands out on an carpet full of fall-like hues. 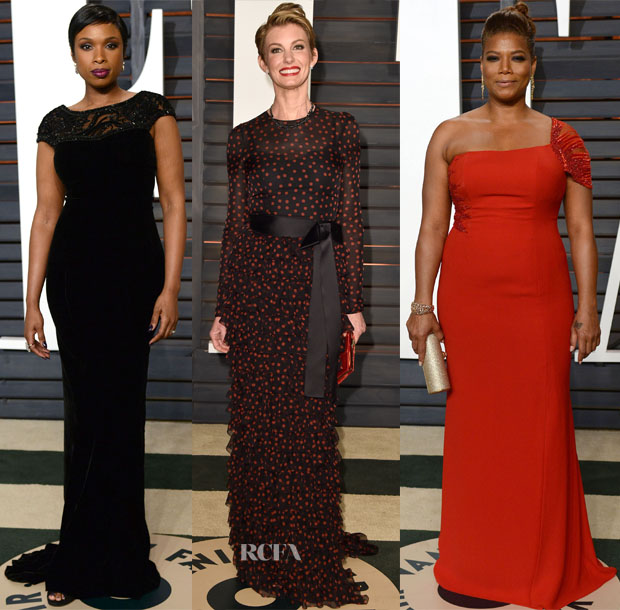 Jennifer Hudson: Following the main-event Romona Keveza gown, the singer wore a Lorena Sarbu black velvet gown with diamond Chimento earrings and a Pasquale Bruni which was what she also wore for her performance.

Faith Hill: The country singer wore a Dolce & Gabbana polka dress with a tiered skirt, which is only new in length as we’ve seen this style a few times before.

Jenny Slate: The actress kept it super simple and chic in Honor.

Laura Dern: The actress fared much better in her Badgley Mischka gown. I prefer this over her heavy metal Alberta Ferretti gown.

Thandie Newton: Always a frontrunner in the style stakes, the British actress opted for a black number enriched with gold detailing. 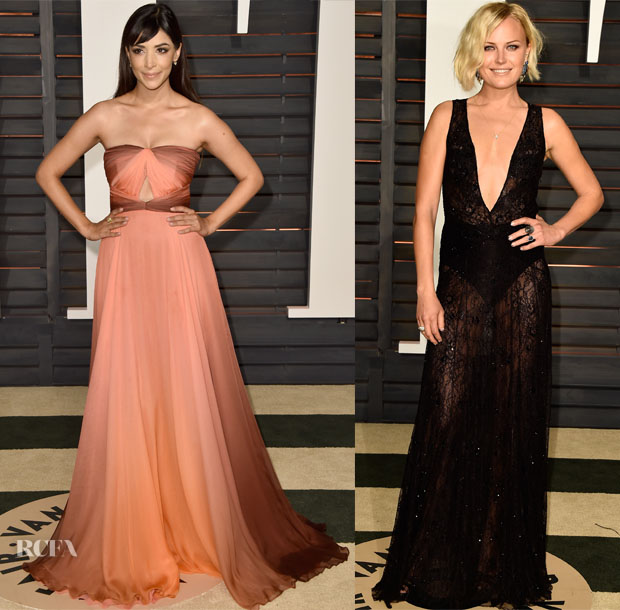 Hannah Simone: The actress wore a Naeem Khan Fall 2015 gown made dramatic by the ombré coral hues and cut-outs. 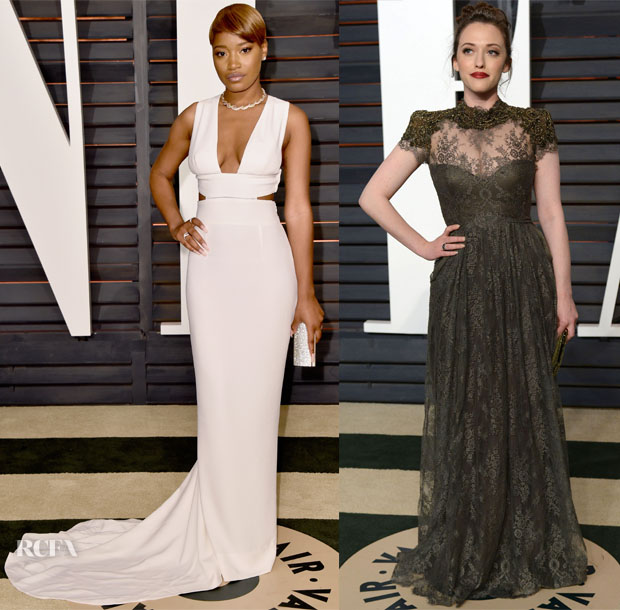 Keke Palmer: The actress wore a figure-flattering Stella McCartney white gown. Yes, we’ve seen this gown before in several colours, and I pretty sure, like all Stella gowns, we will have many more sightings of this look by the end of the year. Henri J. Sillam jewels, including a chunky necklace, rounded out her look.

Kat Dennings: While I love the gothic style of the look, I’m not a fan of the antique grey colour. 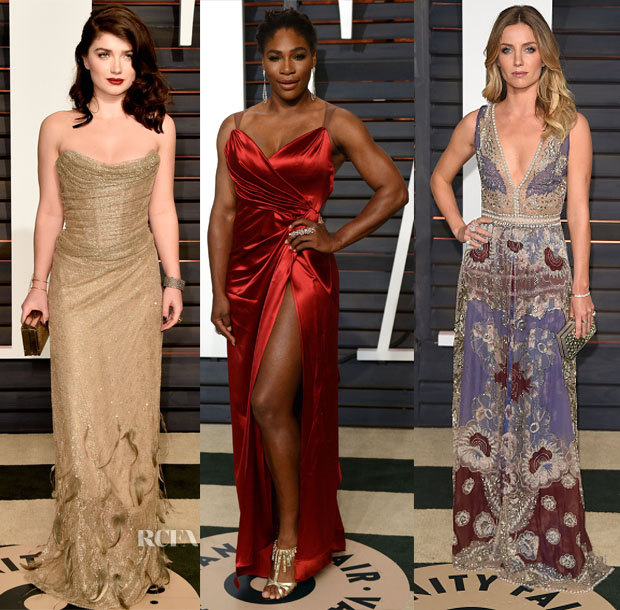 Eve Hewson: This shimmering gold corset gown needs no introduction. Of course it’s Vivienne Westwood. I’m delighted to see Eve wearing a colour other than black for a change.

Serena Williams: The tennis star doesn’t always get it right, but she looked dazzling in a custom Ines Di Santo scarlet-red silk gown with beaded illusion back.

Annabelle Wallis: The British actress wore a boho-inspired Valentino gown. I love the rich detailing on this frock.