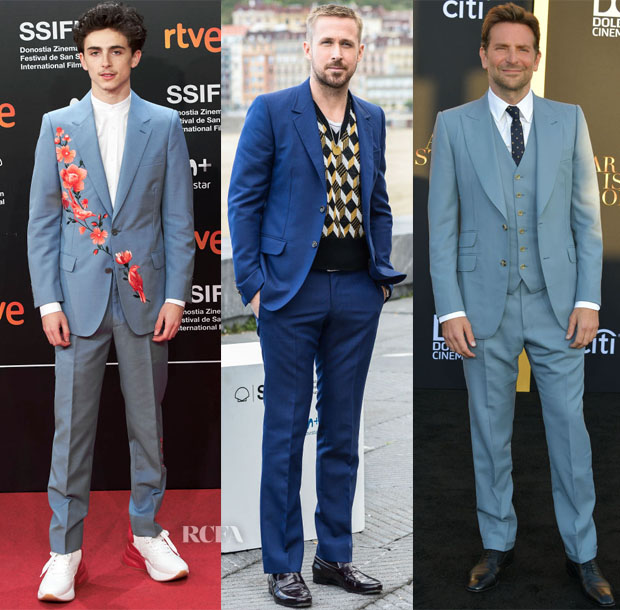 With premieres happening from California to Spain and back again, the men were out to celebrate the movies.

Timothée Chalamet: Continuing the success of his last embroidered suit, the young actor wore an Alexander McQueen Resort 2019 powder-blue suit with cherry-blossom embroidery at the ‘Beautiful Boy’ premiere at the San Sebastian Film Festival in Spain on Monday (September 24). The McQueen sneakers featured red at the heels, adding a dose of urban edge to the look.

Ryan Gosling: Even though we know how much Ryan loves a burnt-orange suit, he skipped it this time out at the ‘First Man’ photocall on Monday (September 24) during the San Sebastian Film Festival. But, he still rocked the same swagger we love with this retro-mod patterned sweater and navy Gucci suit.

Bradley Cooper: At the LA premiere of ‘A Star is Born’ on Monday (September 24), Bradley also worked his powder-blue angles in this Gucci three-piece suit that had a vintage mood. Christian Louboutin dress shoes completed the look. 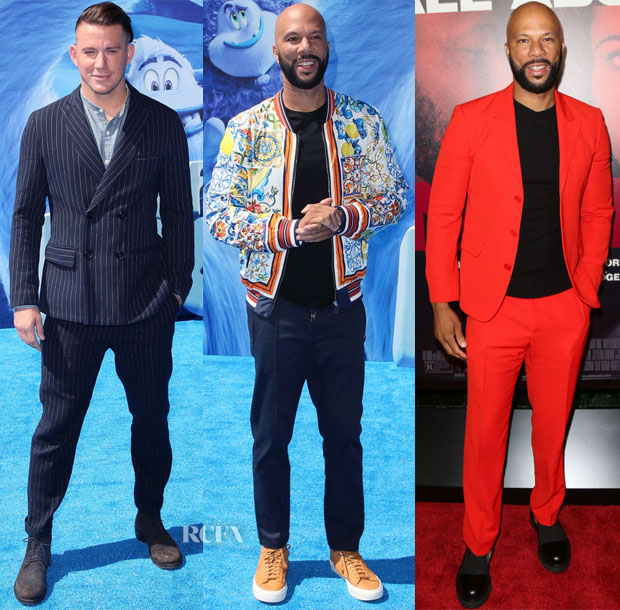 Channing Tatum: Pinstripes made a power play in this Arcady double-breasted suit that Channing wore at the ‘Smallfoot’ premiere on Saturday (September 22) in Westwood, California.

Common: Common relied on the iconic patterning of this Dolce & Gabbana jacket to make a big impact at the ‘Smallfoot’ premiere. I’d say the sneakers had the same effect.

Common: From bright pattern to bold colour, Common rocked a red Stella McCartney suit at the ‘All About Nina’ screening during the 2018 LA Film Festival on Sunday (September 23). As the hue was so striking, he kept the look itself quite minimal.