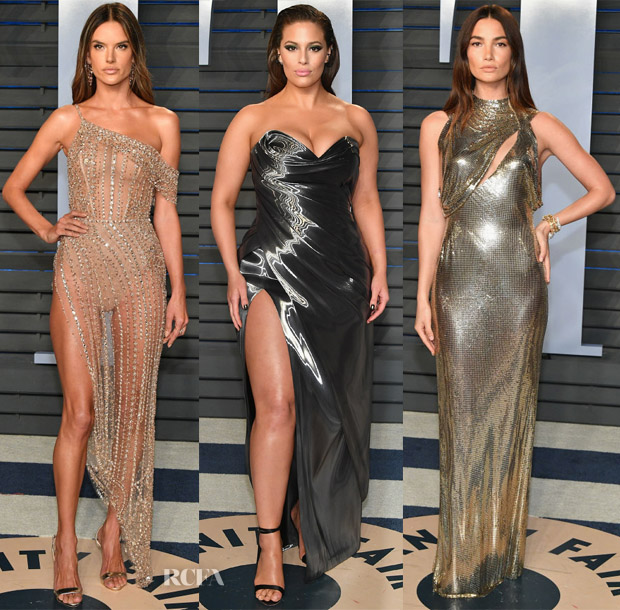 Models stormed the 2018 Vanity Fair Oscar Party on Sunday (March 4) in Beverly Hills, California, with a range of head-turning looks—for better or worse.

Alessandra Ambrosio: The naked dress had another showing with this Ralph & Russo Couture embellished, sheer design, styled with Lorraine Schwartz jewels and Giuseppe Zanotti sandals. There will be no doubt her body isn’t rocking, but I know eyes will be rolling at the complete transparency of the look.

Ashley Graham: This Rubin Singer gown featured a recognizable, slit-to-there silhouette, but it was the gleaming sheen that upped the ante. A swept-back hairstyle and Sophia Webster sandals completed the look. 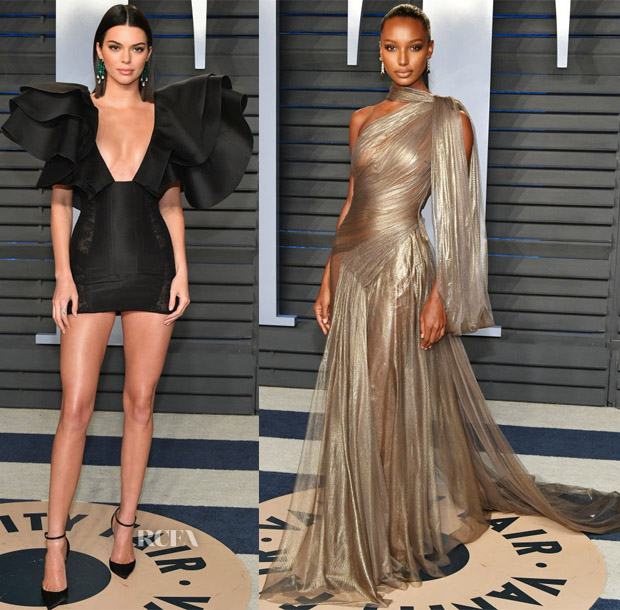 Kendall Jenner: I have to give it to Kendall here, as I was really fascinated by this Redemption mini—at least from the waist up. It was bordering on dangerously short, but those sculptural sleeves in partnership with the gorgeous Lorraine Schwartz gemstone earrings were ever so striking.

Jasmine Tookes: Another vision of metallic gold, this Jean-Louis Sabaji gown may have featured a wealth of draping but the gossamer, sheer quality made it quite seductively revealing, too. John Hardy jewels completed the resplendent look. 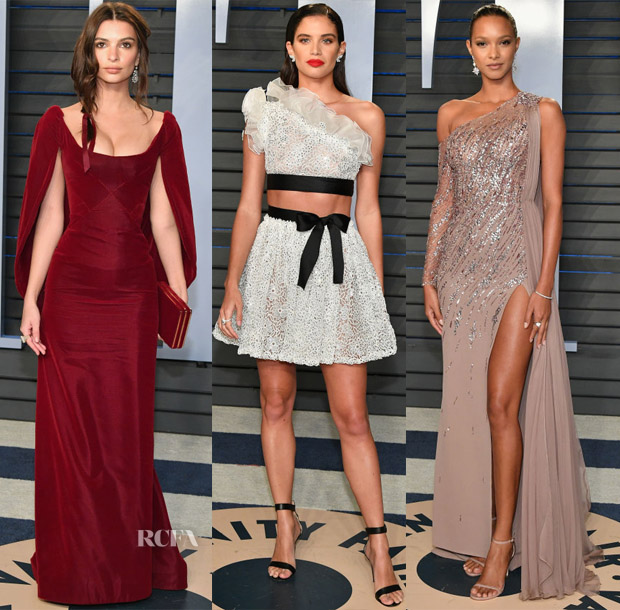 Emily Ratajkowski: This Zac Posen cape gown had a Renaissance-influenced romantic quality to it, and it certainly was a surprise to see Emily opted for this period-style elegance that some might feel is a bit costume-y with her braid.

Lais Ribeiro: I like the diaphanous movement of this Zuhair Murad embellished gown’s chiffon draping. The shortened length of the gown on the opposite side was a bit odd, though. Stuart Weitzman sandals and jewels from Dena Kemp and Pasquale Bruni completed the look. 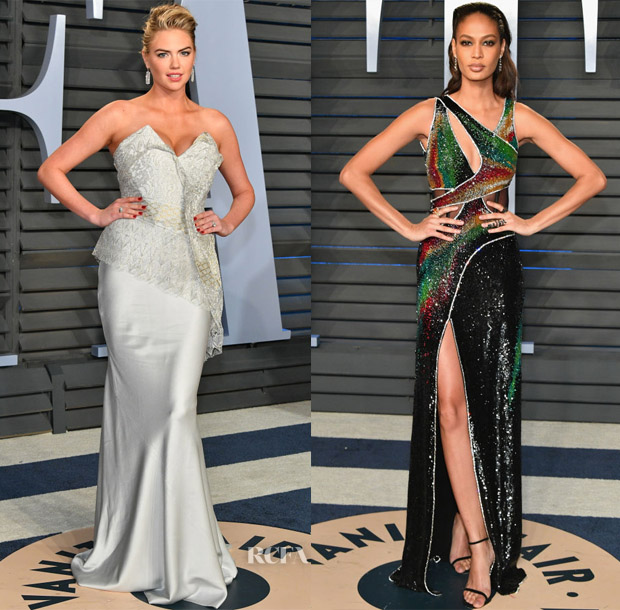 Kate Upton: There was an Old-Hollywood glamour to this ensemble, especially with the Hearts on Fire and Le Vian jewels. But something about the Vivienne Westwood Couture gown with its tapestry bodice came across as a bit dated.

Joan Smalls: High-octane dazzle was this Roberto Cavalli Couture gown’s M.O. I don’t blame her for keeping her hands at her waist, as the exposed corset boning that she covered up was one element too many in this multi-coloured, cutout design. John Hardy jewels completed the look.

Adriana Lima: I love the sweeping elegance of this Alberta Ferretti gown that offered an additional element of sculptural modernity at the back with a big bow-topped train. Her styling was perfected via Giuseppe Zanotti pointy heels and sparkling Chopard jewels along with a dynamic red lip.

Natasha Poly: The pretty-in-pink bubblegum hue of this Dundas off-the-shoulder chiffon gown made for such a girlish, flirty attitude. 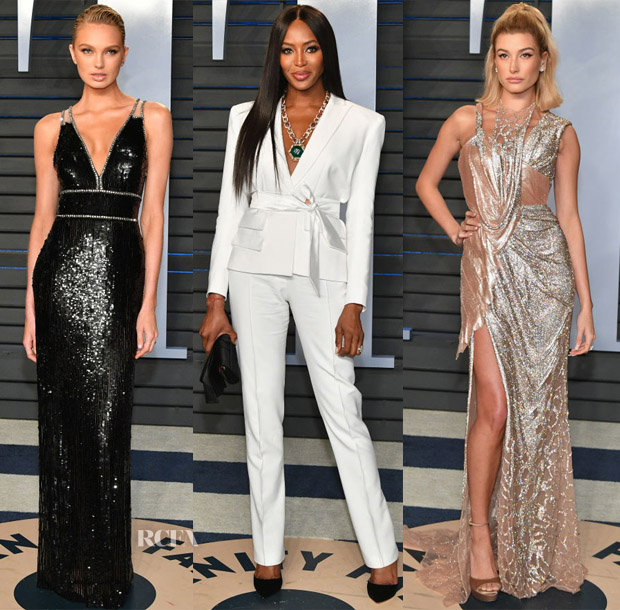 Romee Strijd: This slinky Jenny Packham Pre-Fall 2018 gown was a study in black crystallization with a Lee Savage clutch to finish out the stunning look.

Naomi Campbell: The supermodel skipped the dress route in favour of an Alexandre Vauthier Spring 2018 bold-shoulder suit. As impressive as the pendant necklace was, I think she could have done without it to streamline the black-and-white statement.

Hailey Baldwin: The haphazard layers of this Atelier Versace mesh, metallic gown translated as messier than I would have liked—and her platform shoes didn’t exactly help the cause.

Toni Garrn: The sheer components of this Elie Saab gown were sultry yet modest enough to still be in good taste. It was the styling that I didn’t really understand, as the jewels seemed a bit mismatched and unnecessary and the gold Emm Kuo clutch a strange companion, too. Not to mention, her hair and makeup was an afterthought.

Martha Hunt: I would have liked to see this Marina Moscone Fall 2018 ensemble worn without the trousers, as they were a strange, bottom-heavy counterbalance to the feminine drape of the top.

Taylor Hill: The joys of minimalism were expressed in this coral Narciso Rodriguez cutout gown that proved that polished construction—and a matching coral-pink lip—is sometimes all you need. 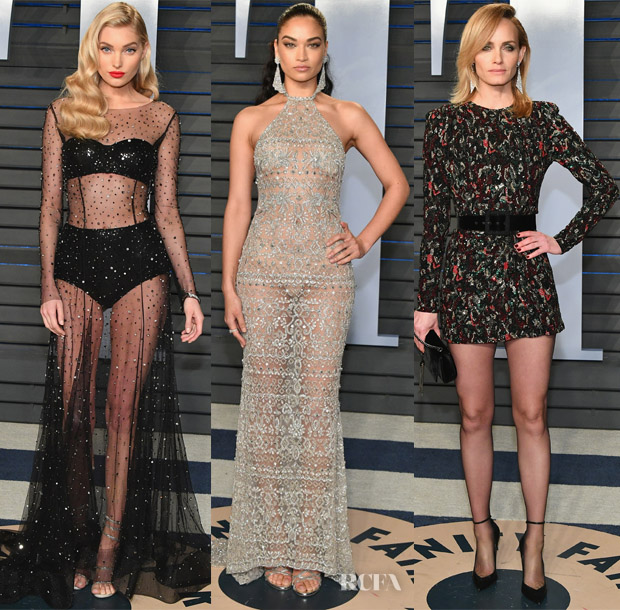 Elsa Hosk: What can be said of this transparent, crystallized Alberta Ferretti gown, as the embellished sheer look has overstayed its welcome for most of us. I did love her old Hollywood wave and red lip—it just need a more elegant look to complement.

Shanina Shaik: And, the see-through streak continues with this Georges Hobeika Spring 2018 Couture gown, the embellishment of which was beautiful—had it been lined. Lorraine Schwartz statement earrings and Stuart Weitzman shoes accessorised the bare-all look.

Karolina Kurkova: As the model likes to try out a range of directional, sharply tailored looks, I’m not surprised she was fascinated by this bronzed Balmain number. But, between the sheer mesh, army-green bra, and the Grecian drape not to mention the embellished mini, there were one too many styles to make a cohesive whole.

Hari Nef: We saw naked dresses in this lineup, but this Gucci caftan was on the opposite end of the spectrum with fierceness only coming by way of the tiger motif.

Heidi Klum: Oh Heidi… and I’m sure we had such high hopes for this Oscars party look, but the fit and fringe of the Ralph & Russo Spring 2018 Couture gown ruined any chance of that. 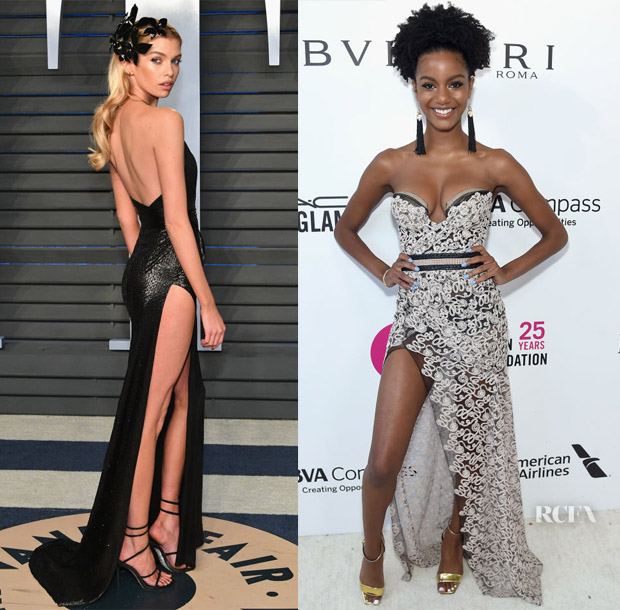 Stella Maxwell: This custom Julien Macdonald body-con design fit Stella like a glove. And, it’s a good thing as with a slit that high, every single centimeter counts. She wore René Caovilla sandals with the gown, but it was her fascinator that added such an artistic quality to the look whilst keeping it on a sophisticatedly sexy and alluring path.

Ebonee Davis: Ebonee was at the Elton John Party, where she worked an Aadnevik lace gown with John Hardy jewels. The tassel earrings are one thing, but I really couldn’t get on board with the blue nails and gold Giuseppe Zanotti sandals.

Cara Delevingne In Aadnevik – The ...

Who Was Your Best Dressed At The 2018 Oscars?