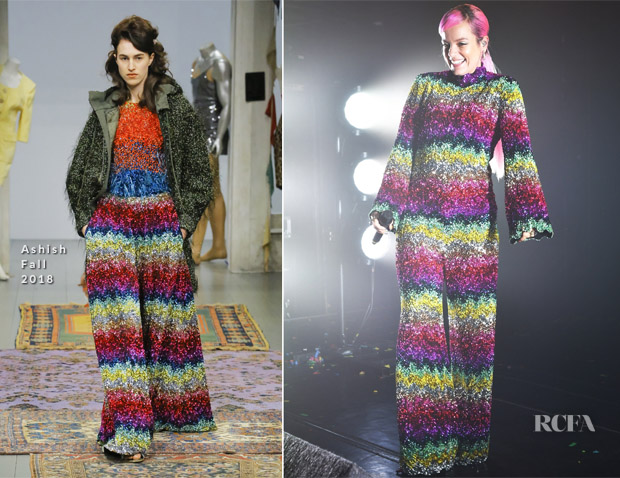 The release of Lily Allen’s new album ‘No Shame’ was marked with a special gig at G-A-Y in London on Saturday (June 9).

During the show the singer dedicated ‘F**k You’ to Piers Morgan, covered Cher’s hit ‘Believe’ and also performed hits including ‘Smile’, ‘Come On Then’ and ‘Not Fair’.

She did so wearing an Ashish Fall 2018 tinselled jumpsuit rendered the designers signature rainbow motif.

The designer noted after his Fall 2018 show that the tinsels are typical of street style at the moment in India, where he’s from. The rainbows were a nod to queer culture—Ashish has noted that in many ways, it’s still illegal to be gay in his home country.

So it was very symbolic that the singer wore this look during her performance at this venue.

Paloma Faith In Ashish – The BRIT ...

Posted by Catherine Kallon on June 15, 2018 In: Ashish, Lily Allen, Runway To The Stage

6 Responses to Lily Allen In Ashish – ‘No Shame’ Album Launch