Reese Witherspoon: The actress’s most memorable looks often have bold colours, so I was surprised she opted for a black Prada dress. That being said, I thought the short length really worked for her, with the embellishment adding some vicariousness. The Roger Vivier shoes enhanced the playful mood.

Emma Roberts: Her choppy blonde fringe was certainly a talking point, but the elegant simplicity of her Giorgio Armani gown didn’t go unnoticed. The strapless column fit perfectly. She styled it in a very modern way with the gold-toned accessories and by leaving the neckline bare.

Emilia Clarke: Like Reese, the ‘Game of Thrones’ star opted for a shorter black dress. She wore a Dolce & Gabbana frock with Gianvito Rossi sandals. I would have loved to see the look completed with a red lip as it would have added some warmth while playing up the brand’s Italian film star aesthetic.

Alison Sudol: The ‘Fantastic Beasts and Where to Find Them’ actress sported a decorative Miu Miu look. It has a vintage undercurrent which suited her tousled bob.

Alison Brie: You might be surprised to hear that the Best Actress in a Comedy Series nominee was outfitted in a Roberto Cavalli gown. The soft shade and ruching aren’t hallmarks of the designer, but the dress still has some of the brand’s signature sexiness. And it looked lovely.

Octavia Spencer: The Best Supporting Actress nominee lit up the carpet with her smile and Tadashi Shoji gown. The warm purple against her complexion was marvelous. The semi-sheer fabric has been used in a clever way and the Tyler Ellis clutch played off the dress’s darker trim.

Brooklynn Prince: The Best Young Performer winner looked like a princess in her red gown. This is sweet, fun and age-appropriate for someone of her seven years. It’s evident that she is comfortable in it. Absolutely adorable.

Mckenna Grace: Another cute attendee, the 11-year-old charmed in a Dolce & Gabbana dress. The ensemble put a smile on my face thanks to the way the floral hair accessory and shoes played up the print in the gown. She is also clearly having fun with the gathered skirt.

Betty Gilpin: The ‘GLOW’ actress looked radiant in an Alex Perry gown. The piece brought new life to a strapless silhouette and cut-outs, fusing them together in a slashed waist with a tie.

Laura Dern: The Best Supporting Actress in a Movie/Miniseries winner continued with the black colour scheme from the Golden Globes with her Balmain ensemble and Roger Vivier ‘Pilgrim jewel’ clutch. The jumpsuit is a quieter piece for the brand, but it exhibits fantastic tailoring. The peek-a-boo lace bra added a sultry touch.

Leslie Mann: The actress presented an autumnal mood in her J. Mendel gown. I love how she wholly committed to it, matching her accessories and even her nail varnish to the frock. The multiple hues prevented it from being one note. Irene Neuwirth jewels completed the look.

Carrie Coon: The mom-to-be wore a Reem Acra dress with graphic pattern. This isn’t the typical maternity look with the circular designs drawing the attention somewhere besides her bump. I wish she had coordinated with silver accessories and a sleeker shoe.

Hong Chau: Opting for soft lace, the ‘Dowsizing’ star wore a beige Dior dress accessorized with Jimmy Choo shoes and a Dior clutch. There is a danger of wearing a dress that matches too closely to one’s skin tone, but I think she got it right. Repossi jewels completed her look.

Yvonne Strahovski: The Australian actress donned a Ronald van der Kemp frock. The Critics’ Choice Awards are more of a casual affair, but this was still too relaxed for the event. At a daytime photocall, it would have been great.

Laurie Metcalf: The ‘Lady Bird’ actress looked regal in a dusty blue Cristina Ottaviano gown. This is something that you could look at decades from now and still appreciate thanks to its timeless grace.

Mary J Blige: The singer and actress certainly brought the glamour in this Vivienne Westwood Couture outfit. It’s another example of the designer’s signature corset shape. The silhouette is fantastic, but it’s the fabric that makes it a winner for me. It photographed beautifully and enlivened her complexion.

Kaley Cuoco: I’m sure there will be many who want a lining in this J. Mendel dress. I would agree as seeing her legs through the fabric takes away from the horizontal banding. Stuart Weitzman sandals were the finishing touch.

Samara Weaving: Part of the appeal of the Australian actress’s Roland Mouret outfit is that you think it’s one thing, but it’s really something else. The folds give way to trousers instead of a skirt. Emphasizing the hips with origami-like pleats is something I would have initially been skeptical about, but the jumpsuit proved me wrong.

Heidi Klum: The model has been redeeming herself on the red carpet, and I think this Georges Hobeika look will hopefully go down favorably thanks to its bohemian allure. The plunging neckline and thigh-high slit still have her signature sexiness, but the soft fabric and long sleeves balance the revealing details. 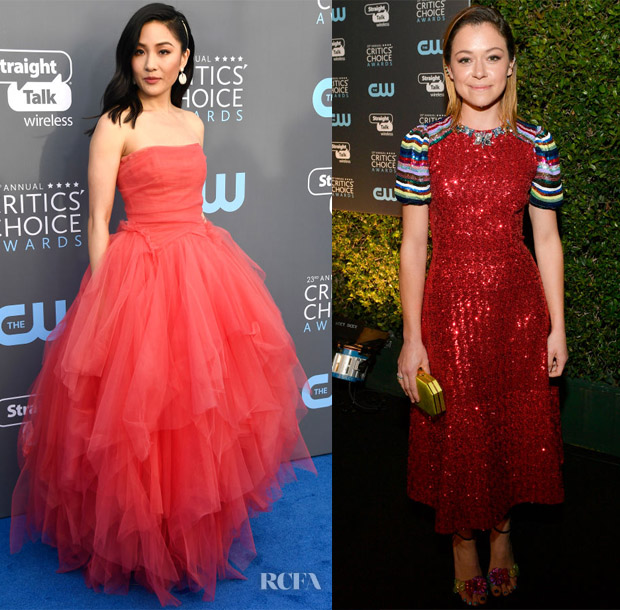 Constance Wu: As far as ballgowns go, I found myself being totally underwhelmed by this watermelon offering from Galia Lahav.

Tatiana Maslany: Usually when a celebrity opts for a gorgeous dress as colourful as Tatiana’s Mary Katrantzou Resort 2018 sequin number; the shoes play second fiddle. But on this occasion her Sophia Webster ‘Lilico’ rainbow sandals are the perfect match to complete her standout look.