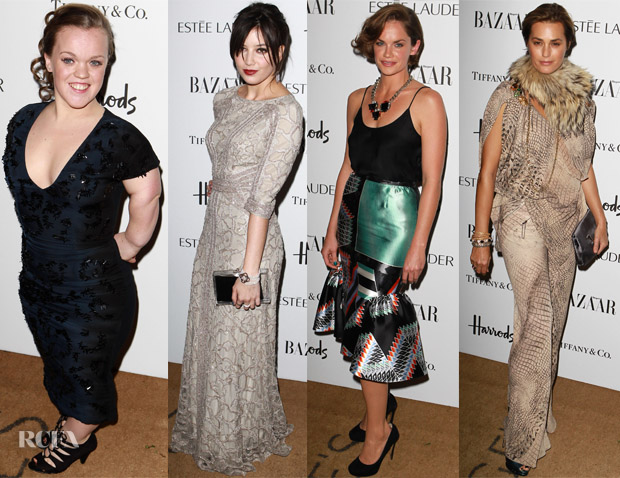 Here are some more looks from Harper’s Bazaar Women of the Year Awards which took place at Claridge’s Hotel in London yesterday evening.

Ellie Simmonds: We’ve had the face of and the voice of the 2012 London Olympics; here we have the face of the Paralympics, Ellie Simmonds. The athlete wore a midnight-blue Stella McCartney dress with a V-neckline and black embellishments. She was honoured on the night with Victoria Pendleton and Jessica Ennis, all receiving the ‘British Ambassadors of the Year’ award.

Daisy Lowe: The model opted for pale makeup with smoky eyes and blood-red lips while wearing an embellished Elie Saab gown. Her ¾-length-sleeve gown was styled with a Charlotte Olympia clutch. Daisy often opts for this type of makeup so it wasn’t just for Halloween.

Yasmin Le Bon: The supermodel wore a Willow Resort 2013 draped top and loose-fit pants with a snakeskin print which she styled with petrol-blue Nicholas Kirkwood peep-toes and a silver clutch.

‘Dior And I’ London Premiere