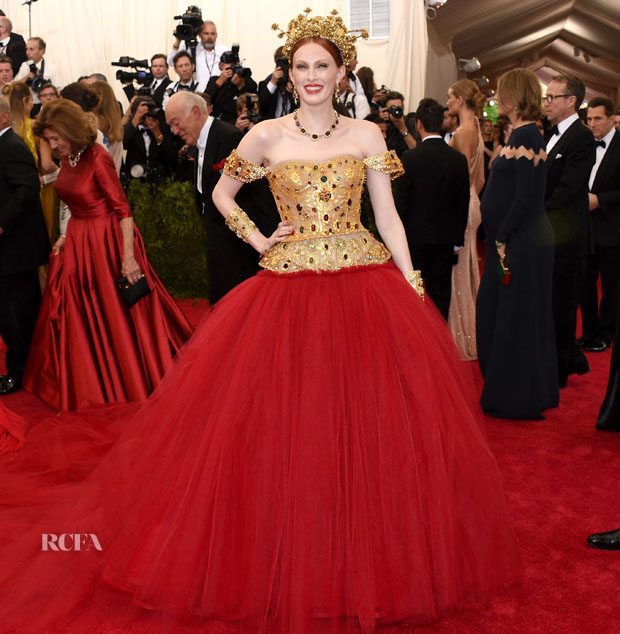 The models also had their moment at the ‘China: Through the Looking Glass’ 2015 Met Gala, hosted at the Metropolitan Museum of Art in New York City on Monday (May 4), some strutting to the beat of the theme better than others.

Karen Elson: One of the most extravagantly attired models, Karen truly embraced the ‘costume’ in the Costume Institute Benefit Gala in her Dolce & Gabbana ballgown spectacle featuring an ornately embellished and gilded bodice with matching cuffs, and an explosion of red tulle. Her elaborate gold headpiece also gave Sarah Jessica Parker’s own topper a bit of crown competition. This was the Chinese princess moment of the night. 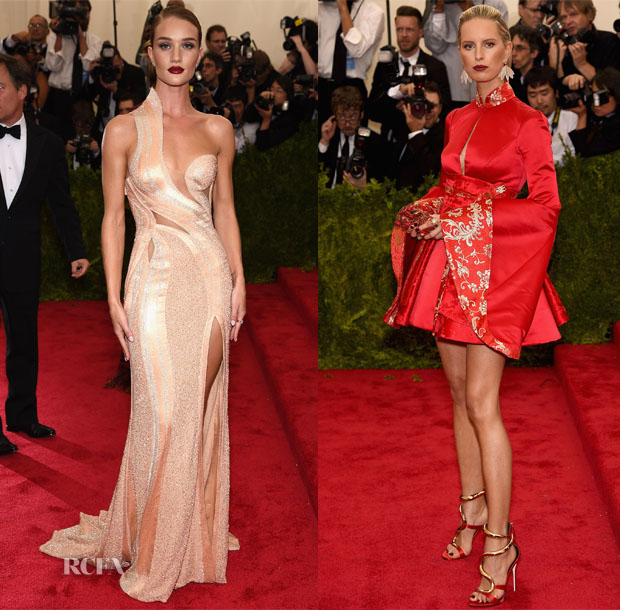 Rosie Huntington-Whiteley: Striking a pose in an Atelier Versace shimmery gown that traced her every curve, Rosie turned up the sex appeal with this slinky, structured silhouette—her version of going nude for the evening, which translated more in more sophisticated fashion than some other, ahem, naked entrances on the red carpet. A deep oxblood lip and slick bun were a high-impact finish.

Karolina Kurkova: This leggy lovely cut things short in a gold-embroidered crimson frock that I would have never guessed to be a Tommy Hilfiger design. Providing the ultimate in East meets West allure, the dress emphasized traditional Chinese style references, which were augmented by some of the best accessories of the night including twisting gold Giuseppi Zanotti sandals, fan-shaped earrings, and a gold cuff to pin her samurai hair. 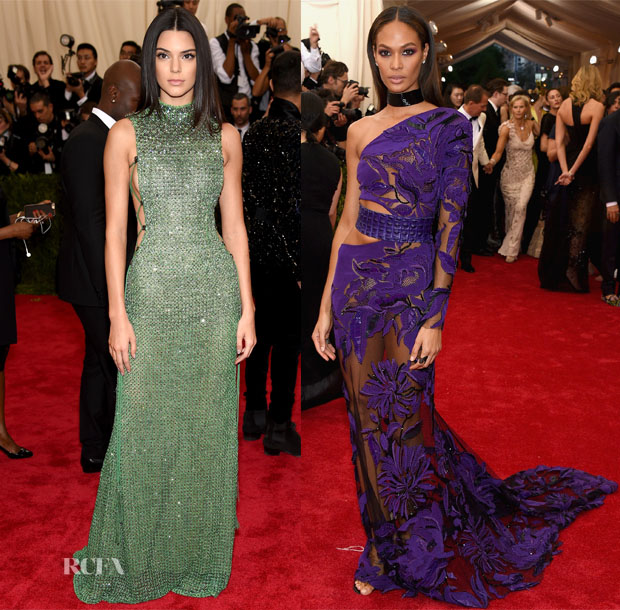 Kendall Jenner: While sexy, side cleavage was the focal point of this Calvin Klein Collection gown, I’m guessing the jade-green colour and tassel lace-up sides were meant to reflect some measure of the theme. 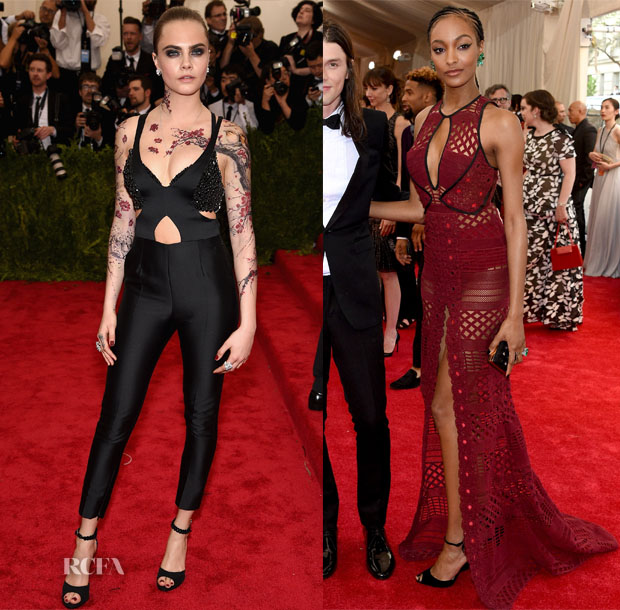 Cara Delevingne: We’d expect nothing less from the edgy, wild-child model than this Stella McCartney black, cutout bodysuit and faux tattoos that decorated her upper body with Chinese-inspired artistry. Once a rebel, always a red-carpet rebel.

Jourdan Dunn: Her burgundy, laser-cut Burberry gown was sharply contrasted with black detailing and black accessories, but her jade-green earrings provided a vibrant pop of colour in homage to the theme. 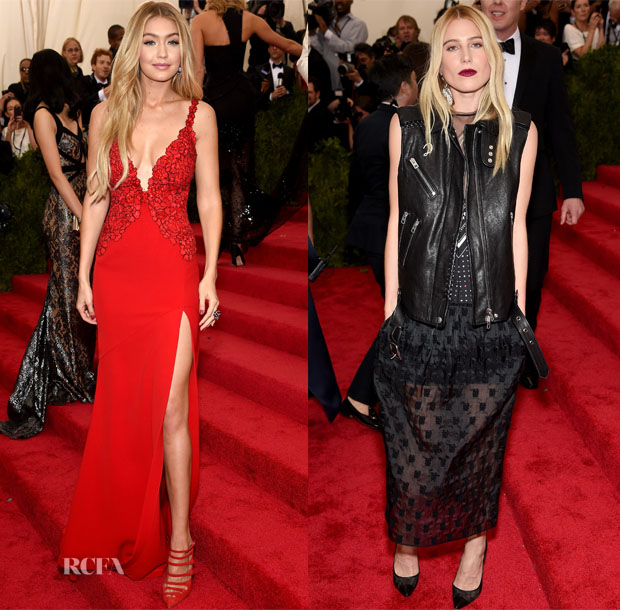 Gigi Hadid: Simply stunning in red, Gigi wore a Diane Von Furstenberg side-slit gown. Similar to many of the evening’s red gowns, this one fell into the nice and safe category.

Dree Hemingway: Her punkish-goth black Coach outfit didn’t exactly ooze with Chinese essence, so instead she used her leather motorcycle vest to directly tell everyone that she’s a “China Girl.” Enough said. 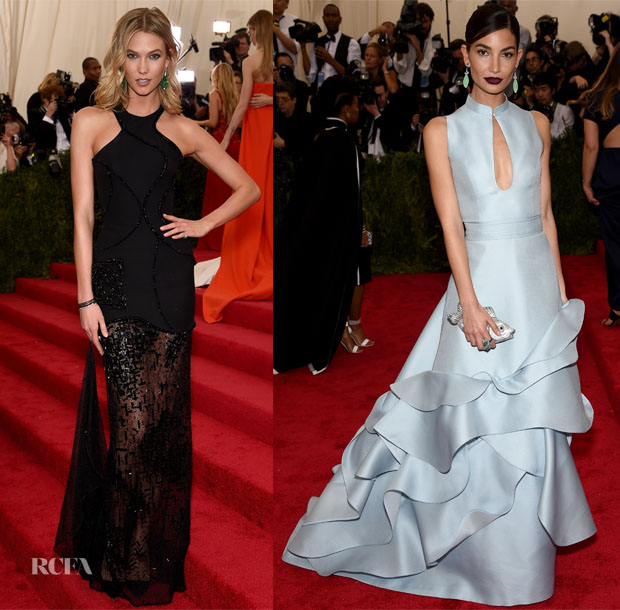 Karlie Kloss: What I love most about this statuesque stunner’s entrance is the glorious whisper of jade-green earrings against the shimmering, embellished Atelier Versace halter gown.

Lily Aldridge: The delicate nature of her powder-blue Carolina Herrera ruffle gown was contrasted with jade green jewels and a fish clutch, along with an oxblood lip that just seemed several shades too dark for this daintier dress. 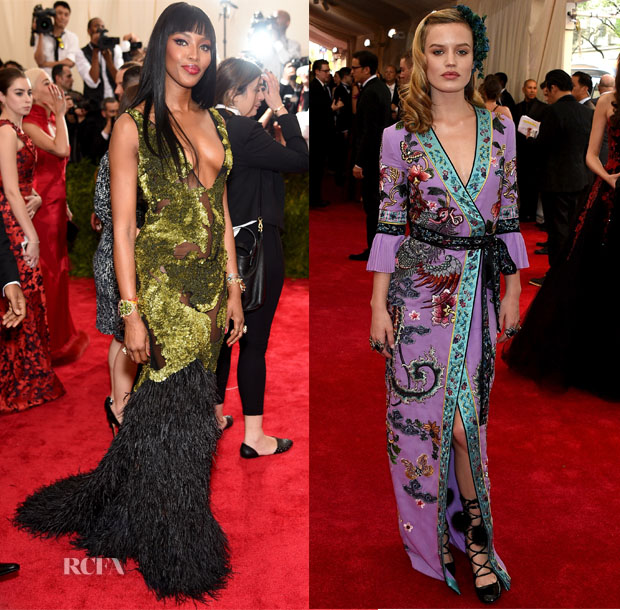 Naomi Campbell: I wasn’t as enamoured by the supermodel’s Burberry gown as the velvety green patchwork dress and feathered skirt felt a bit dated. A Cleopatra ’do and winged eye finished the look.

Georgia May Jagger: The British model wore a lilac Gucci robe-style, belted gown that was embroidered in a dazzling, multicoloured array of Chinese-inspired flowers and birds. With such intricate artistry and embellishment, the hairpiece and strappy pom shoes weren’t exactly necessary and took this look to overcooked status. 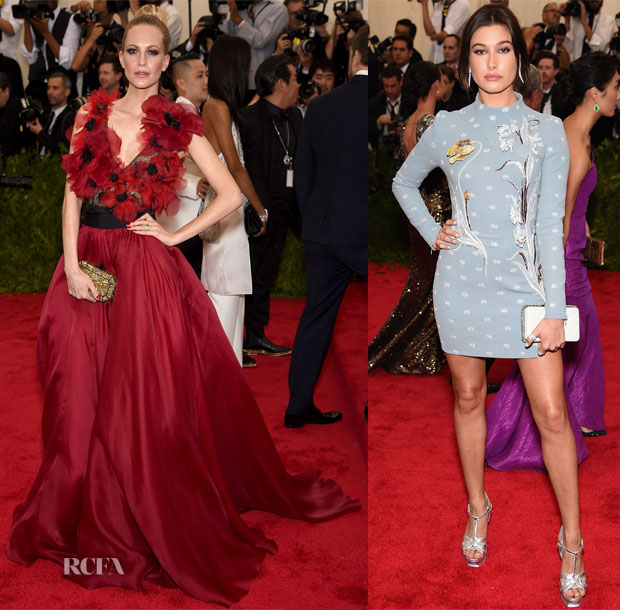 Poppy Delevingne: There was an enchanted quality about the voluminous whimsy of this Marchesa ruby-red gown with a burst of big poppy-like flowers at the bodice.

Hailey Baldwin: Debuting a new dark brunette ’do, Hailey exchanged a long gown for a custom Topshop minidress in a China blue pattern with dimensional embroidery. The silver sandals cheapened the look. 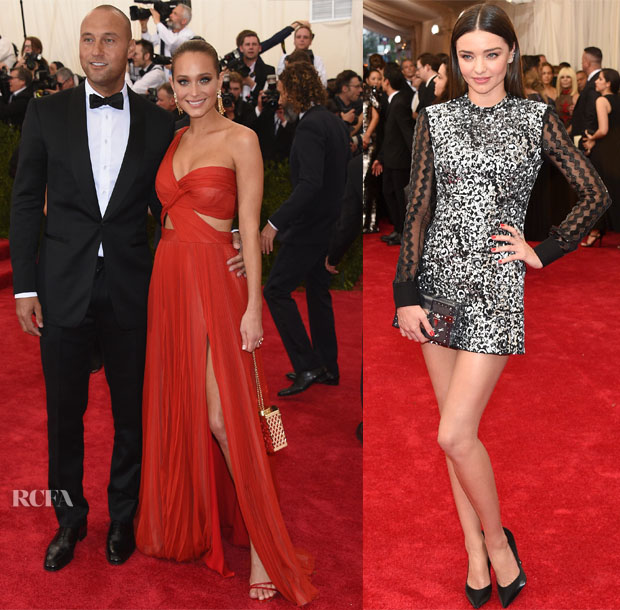 Hannah Davis: Another pretty red gown, another off-theme statement… But Hannah was still gracefully sultry in this languid, pleated J Mendel dress, to which she did attempt to add the Chinese influence of tassel-like earrings, an accessory trick that was used by many attendees throughout the night. Her other accessory was, of course, her beau Derek Jeter.

Miranda Kerr: Miranda won the prize for the mini-est of minidresses among the models with her shiny Louis Vuitton number worn with sleek centre-parted locks. 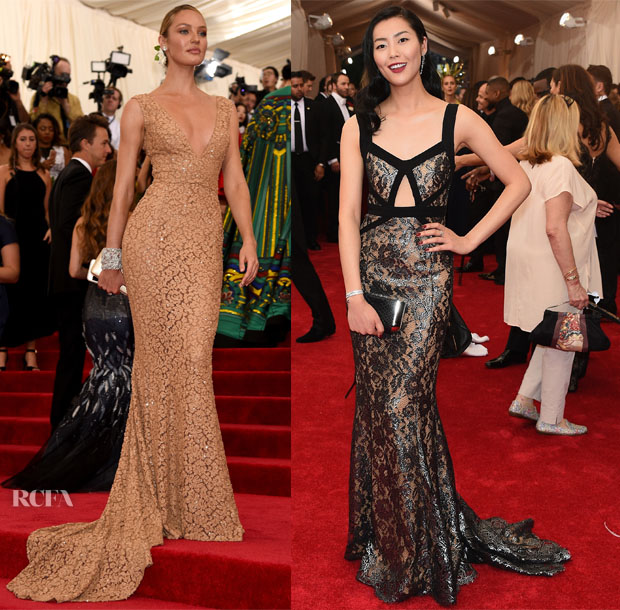 Candice Swanepoel: The seductive glamour of this second-skin nude lace gown by Michael Kors won me over, as did her chic, minimalist styling save for the one big statement cuff.

Liu Wen: The dark metallic lace Michael Kors gown with a keyhole cutout simply didn’t have the impact I would have hoped. 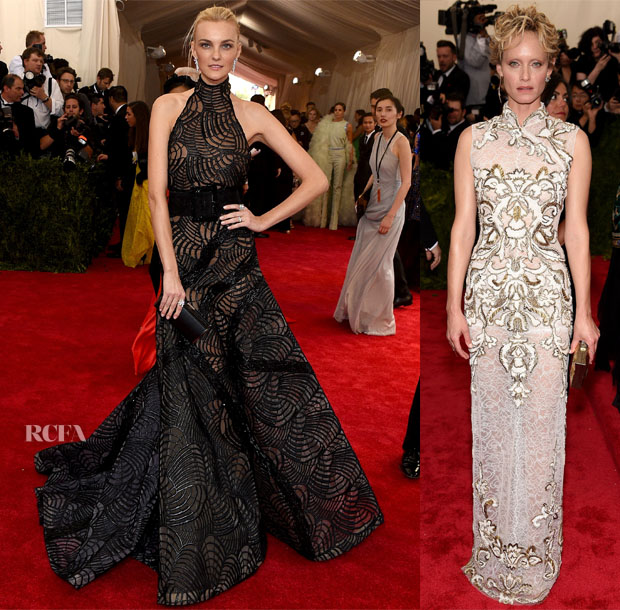 Amber Valletta: Sheer lace? Check. Ornate embroidery? Check. High neckline? Check. The gown had all the expected details, but I failed to see the rationale behind her lightened eyebrows and crop of curls. 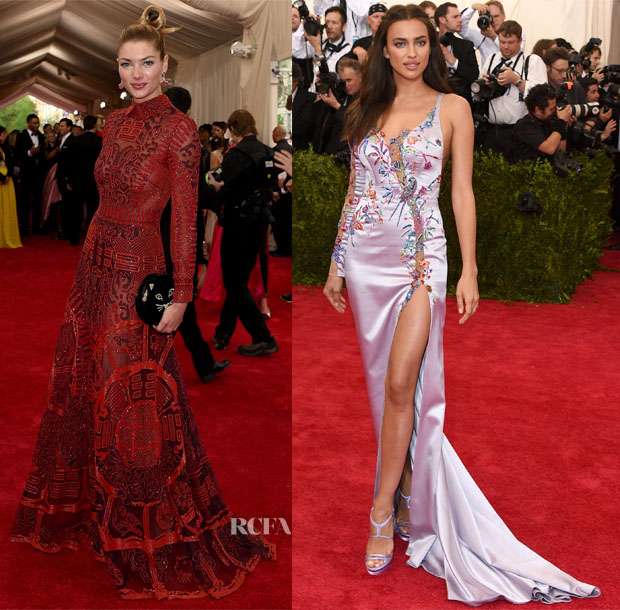 Jessica Hart: The craftsmanship of Jessica’s red velvet Valentino gown in a highly decorative motif was breathtaking, with a quirky looped updo and kitty-cat clutch topping off the look in less serious form.

Irina Shayk: I think this lavender Atelier Versace satin, slit-to-there gown with a carnival mood and a funfetti of floral embroidery speaks for itself—and it’s not exactly saying positive things. 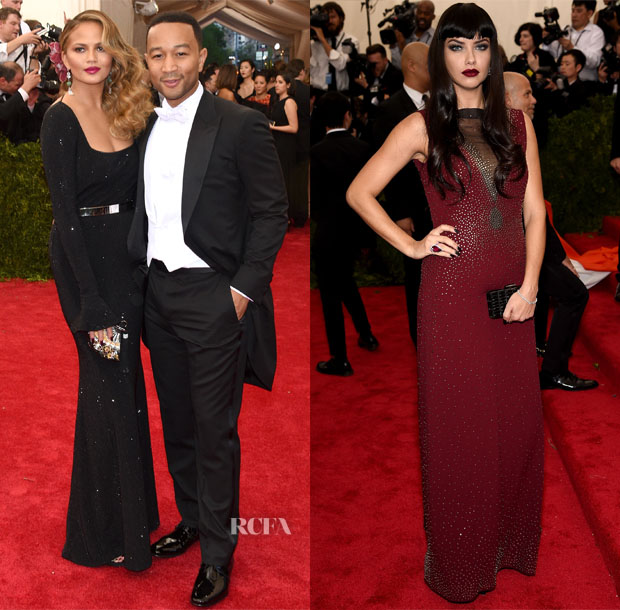 Chrissy Teigen: Going the route of classic sophistication, the model wore a glistening black St. John gown with John Legend at her side in a handsome Gucci tux with white vest and bow tie. Their looks were stronger together, making them a power couple of the night.

Adriana Lima: I failed to recognize the Brazilian bombshell in this moody Marc Jacobs deep scarlet gown. Her vampy makeup and Cleopatra hair aside, the shapeless dress did nothing to highlight her gorgeous figure.