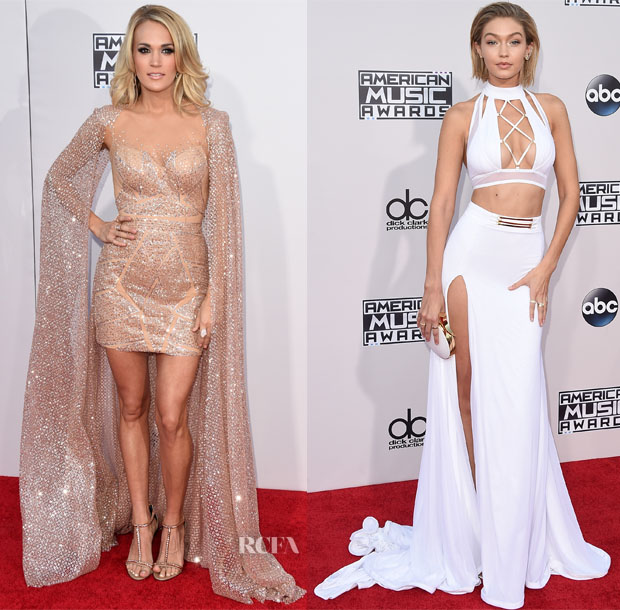 A constellation of other stars were also at the 2015 American Music Awards, held at Microsoft Theater on Sunday (November 22) in Los Angeles, California.

Carrie Underwood: The winner of Favorite Country Female Artist, Carrie brought the familiar sparkle out to play in a glittery Yas Couture confection styled with complementary Greymer sandals. The short mini dress had the sexy sass appeal while the long cape addition brought the drama of a full gown. 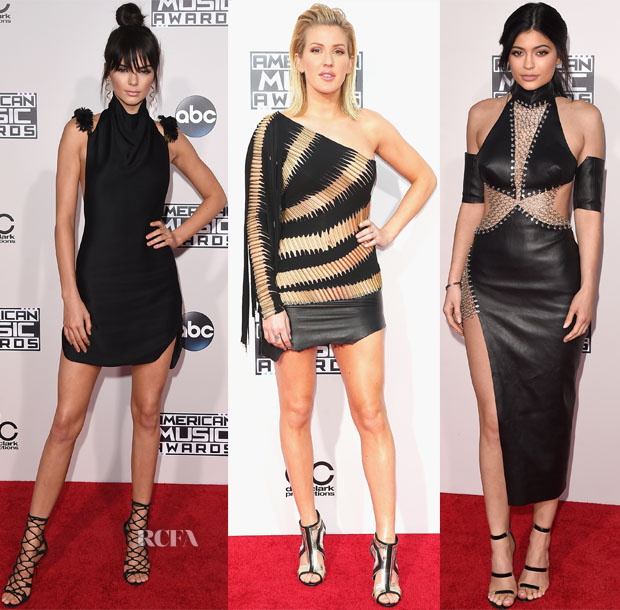 Kendall Jenner: The model’s Oriett Domenech Spring 2016 frock was no ordinary LBD. The shoulder fringe detailing and backless silhouette elevated the sultry yet still youthfully sophisticated look that I found myself loving for its chic simplicity finished by an on-trend topknot and cage sandals.

Ellie Goulding: The singer’s Alexandre Vauthier Fall 2015 Couture ripped and shredded mini was dressed up with gold metal embellishment, but it just translated as rather dated.

Kylie Jenner: Donning a custom Bryan Hearns black leather-look dress, Kylie embraced edgy sexiness with chainmail cutouts. That said, I found her ensemble to be significantly less tasteful than her sister Kendall’s, and the fit was rather odd despite it being a custom design. Tamara Mellon ‘Frontline’ sandals did add more minimalist elegance. 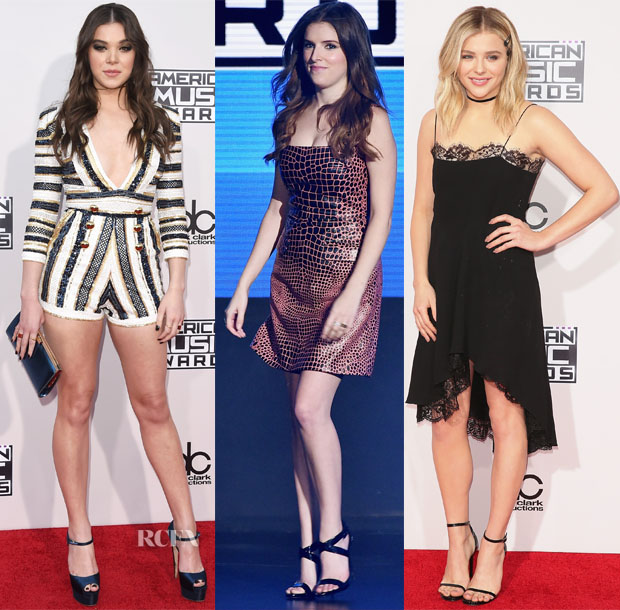 Hailee Steinfeld: The starlet’s Zuhair Murad Spring 2016 shiny embellished playsuit was a fraction too short for comfort. The Brian Atwood platform sandals are nothing new and certainly better swapped for another less clunky shoe, but I do like that she brought out the blue in the outfit with her Jimmy Choo ‘Camille’ patent clutch.

Anna Kendrick: One of the quieter ensembles of the evening, her Christopher Kane Fall 2015 dress did channel a wilder side with a degrade giraffe print. 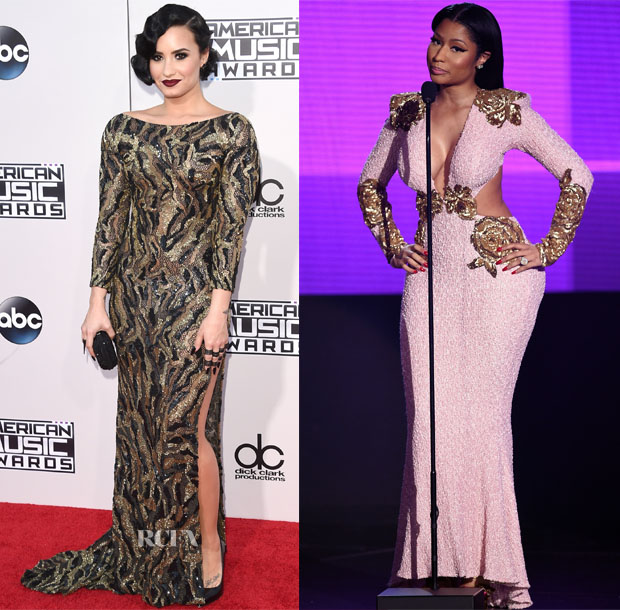 Demi Lovato: Channeling a vampy vibe, the songstress wore a Lorena Sarbu Fall 2015 metallic mesh gown, accessorized with Giuseppe Zanotti pumps and a matching clutch, before taking to the stage to perform. Her striking black pin-curled bob and oxblood lip were a dramatically cool finish to the elegant-edgy look.

Nicki Minaj: The rapper’s hands-on-hip pose is exactly how I feel about her Michael Costello gown. Plunge, cutouts, body-con, golden embellishment, thigh-high slit—a bit too much for one Nicki dress. 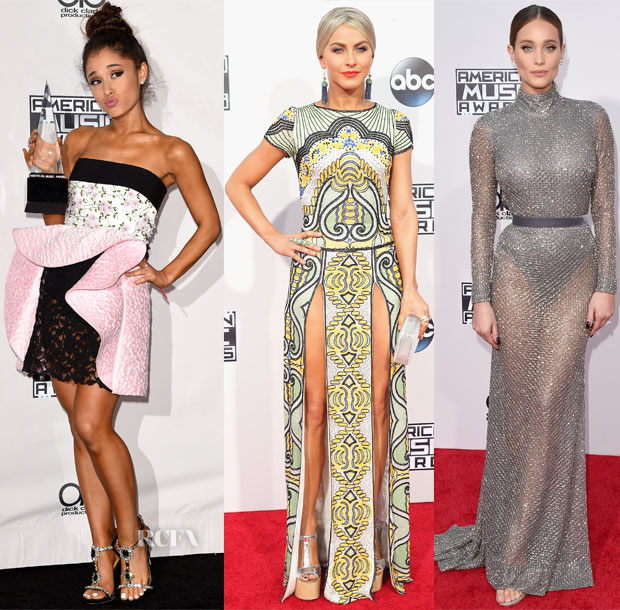 Ariana Grande: The winner of best pop/rock artist embraced the girly, style-forward edge of a Giambattista Valli Fall 2015 Couture frock. However, with the pink ruffle piece and the sheer lace skirt underneath, it translated more like a wardrobe malfunction with the skirt’s lining showing below.

Julianne Hough: Decorative was the name of Julianne’s game, as she opted for a Naeem Khan Spring 2016 fully beaded gown that possessed a rather Egyptian deco flair. She lost me though from the waist down with the uncomfortably high front slits and the rather unfortunate silver super-platform shoes. Why oh why. A Rauwolf clutch finished the look.

Hannah Davis: Not content to be left out of the sheer madness, the model showed off her form in a Naeem Khan silver mesh backless gown. It was cheeky to say the least. 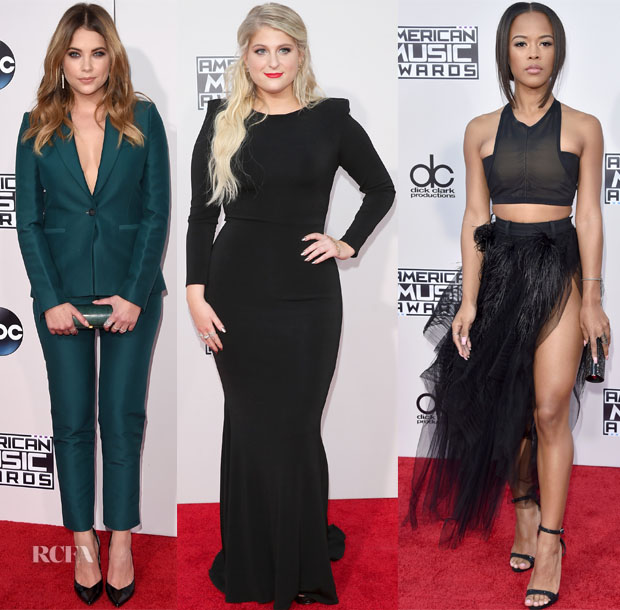 Ashley Benson: One of the only stars who embraced an androgynous look for the evening, the actress suited up in a teal Max Azria Atelier suit. It was refreshingly classic and a beautiful colour for the actress and her darker locks.

Meghan Trainor: There is no denying the refinement of the singer’s Michael Costello black, figure-skimming gown. But it was rather serious, and she perhaps could have had a bit more fun with her look for the AMAs.

Serayah McNeill: Fun wasn’t a problem when it came to the ‘Empire’ actress’s whimsical yet rock-star Vera Wang Spring 2016 feathered two-piece ensemble worn with a Swarovski clutch—although a little less leg would have been well advised.