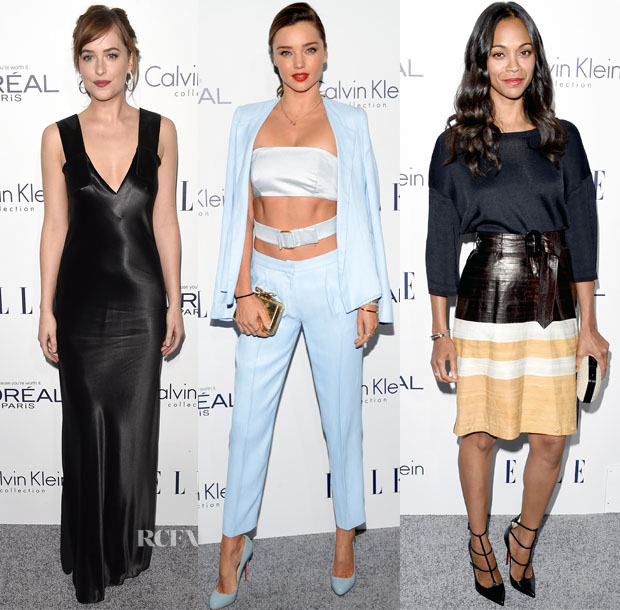 Dakota Johnson: As one of the honorees, Dakota maintained her minimalistic-chic approach in a black Calvin Klein Collection gown. Shame about the creases, but it was still a sensually glam, dressing gown moment for the young star. However, it did leave me feeling as if something was missing.

Miranda Kerr: Like Carey Mulligan, Miranda was a beauty in baby blue. The model wore Calvin Klein Collection that fused the soft hue with masculine tailoring and sexy, skin-baring lines. The belly-button-hiding belt across her enviable abs was perhaps used in an effort for a bit more event-appropriate coverage, even if it was a bit bizarre. Matching Christian Louboutin ‘Dorissima’ shoes, a Louboutin ‘Fiocco Box’ clutch, Swarovski by Miranda Kerr collection jewels, and a vivid red lip pulled the look together.

Zoe Saldana: Dressed in tailored sophistication, the actress wore a fall-inspired Calvin Klein Collection outfit with Christian Louboutin Toeless Muse pumps. I only wish her hair had mirrored the sleek factor with a simple bun. 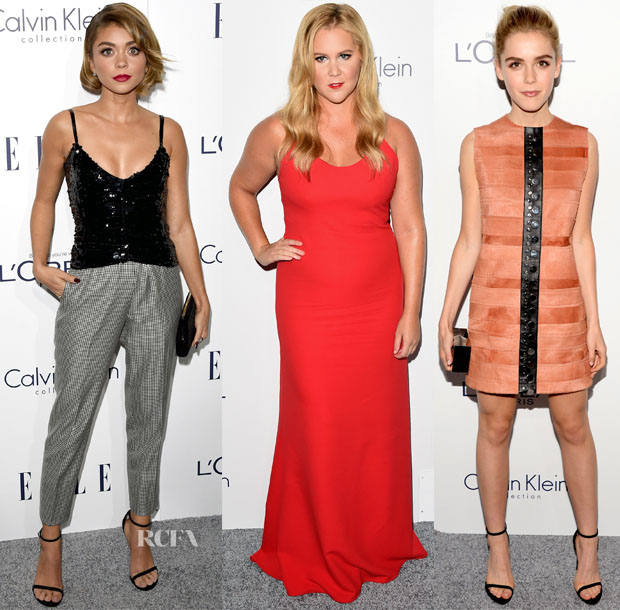 Sarah Hyland: Mixing her Armani mannish cropped trousers with a snazzy, sequin top, Sarah ensured her glitz was appropriately balanced. A red lip and tucked-under ’do added a vintage allure to the look.

Amy Schumer: As an honoree, the funny girl played the ultimate lady in red. I don’t have an issue with the simply elegant lines of the Calvin Klein Collection gown. But the look would have benefited greatly from a simple ponytail and some jewels. There is a sense of nakedness as currently presented.

Kiernan Shipka: Continuing to impress with her youthful, style-forward aesthetic, the starlet showed off a Calvin Klein frock with interesting textural components. I love how effortlessly she wore this mod look, keeping her styling streamlined so the quirky, classy beauty of the dress could shine. 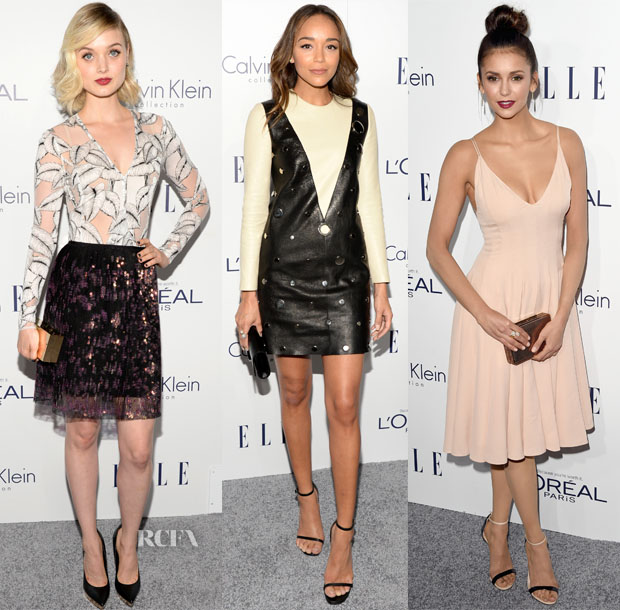 Bella Heathcote: Opting to not wear Calvin Klein, she took a Thakoon Spring 2016 look out for a spin. She lost me from the waist down as the glittery skirt was a rather brash contrast to the daintier illusion top. The dark pumps were likewise a heavy finish.

Ashley Madekwe: Her Calvin Klein Collection romper was both playful and punk with oversized studded leather accents and plenty of tough-girl-chic attitude.

Nina Dobrev: Showing her softer side, she wore a ballet pink Calvin Klein Collection frock that was beautifully feminine. While I loved her sandals with the dress, and could even find favour with the dark oxblood lip for its dramatic finish, I do wish her hair had been worn in soft waves instead of a towering bun. 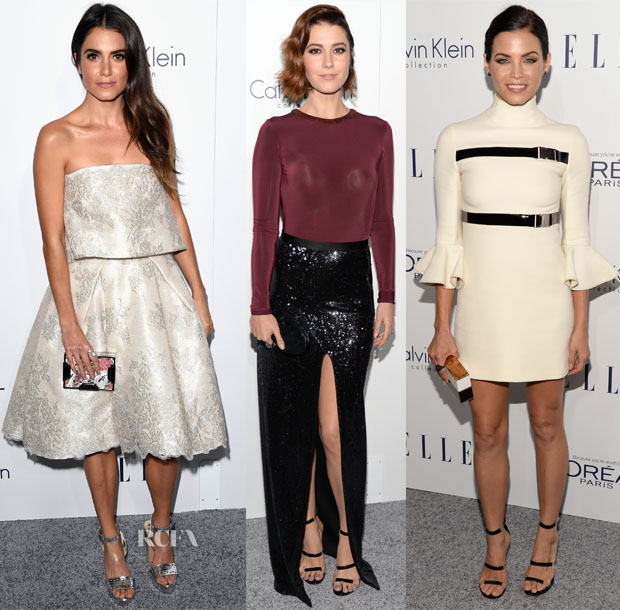 Nikki Reed: In an effort to edge up the bridal-inspired, lace doily design of this Monique Lhuillier Spring 2015 dress, Nikki accessorized with a Lee Savage clutch and galactic silver Bionda Castana platforms. It didn’t exactly come together.

Mary Elizabeth Winstead: Sleek and moody with a hint of sparkle, the actress wore a Halston Heritage skirt with a burgundy bodysuit paired with Tamara Mellon sandals and an Edie Parker clutch.

Jenna Dewan-Tatum: While I wanted to love this winter-white David Koma dress, the constricting, luggage-strap black buckles were a bit of an eyesore. Like Mary Elizabeth, Jenna wore Tamara Mellon’s modern update on the strappy sandal. 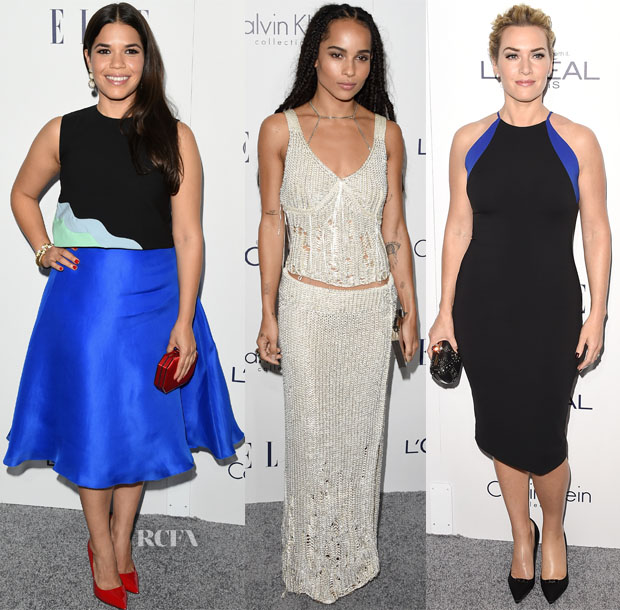 America Ferrera: Electric-blue is always one of my preferred shades on the red carpet, but this Novis ensemble wasn’t my favourite. For one thing, the lipstick-red handbag, nails, and Kurt Geiger shoes were an odd match. Perhaps if she had also worn the shade on her lips, a sense of cohesiveness would have existed.

Zoe Kravitz: With all the rocker edge we expect plus the lighter note of its ecru hue, this Calvin Klein Collection harness design was stunningly and intricately woven with metal embellished detail. It was likely a heavy outfit to wear, but I do wish the skirt did not seem as if it was sagging so much.

Kate Winslet: Absolutely impeccable in a custom Badgley Mischka dress, Kate was the epitome of polished perfection in this design that fit her like a glove. I love the bold blue accents at the bodice for an understated yet powerful finish. 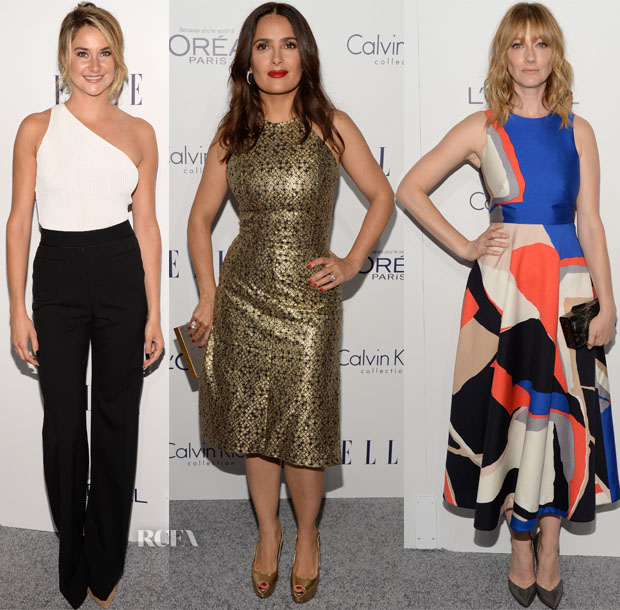 Shailene Woodley: The statuesque star flaunted her legs for days in a Calvin Klein Collection black-and-white asymmetrical jumpsuit that could have used a bolder earring or a bangle—and a new hairstyle.

Salma Hayek: A golden girl for the day, she wore a Saint Laurent metallic patterned frock with clunkier, gold platform heels. I will have to admire the look from the ankles up.

Judy Greer: All the happy vibrancy of this colourfully patterned L.K. Bennett dress came to an abrupt halt with Judy’s hair and makeup. I just wanted the liveliness of the frock reflected in a peppier ’do and a small ounce of lipstick. 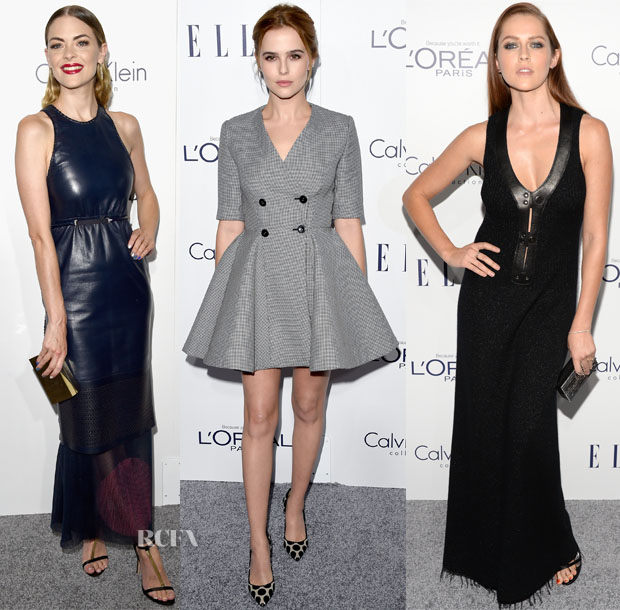 Jaime King: This Calvin Klein Collection dress simply had me at hello, what with its midnight-blue sophistication and slightly quirky, style-forward sheer hem detail, all of which Jaime wore with the utmost grace and modernity.

Zoey Deutch: This look was feminine and fun all rolled into one vintage-mod Christian Dior frock paired with polka-dot pumps.

Teresa Palmer: The actress took this leather-studded Calvin Klein Collection gown and wore it at its vampiest. First of all, I wanted to cut the fringe off at the bottom.

Who made an impression on you?