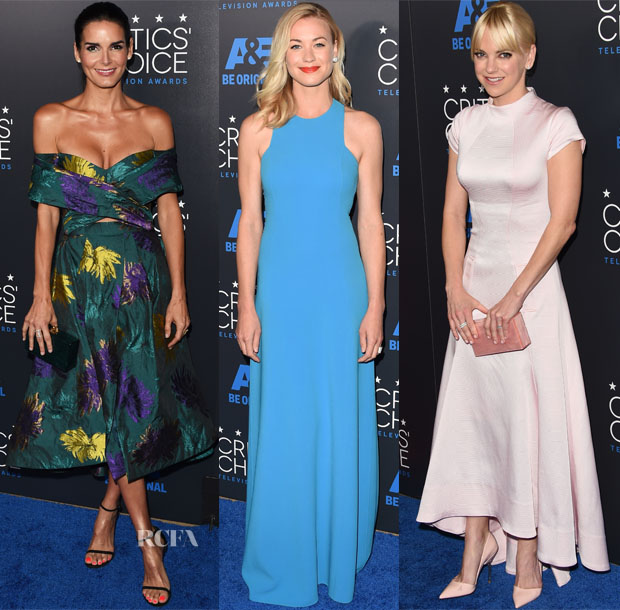 A crush of additional lovelies joined Charlize Theron and Cat Deeley at the 2015 Critics’ Choice Television Awards, hosted at The Beverly Hilton Hotel on Sunday (May 31) in Beverly Hills, California.

Angie Harmon: The actress was vibrant in a beautifully printed Christian Siriano Fall 2015 frock with a primly feminine tea-length skirt and a much sultrier, off-the-shoulder neckline that might have needed a nudge up. As is, it looks a bit close to a wardrobe malfunction.

Yvonne Strahovski: The intense sky-blue hue of this Michael Kors Spring 2015 gown was enough to strike a beautiful chord in ‘The Astronaut Wives Club’ actress’s minimalistic silhouette. I love the additional punch of colour provided by the coral-red lip. 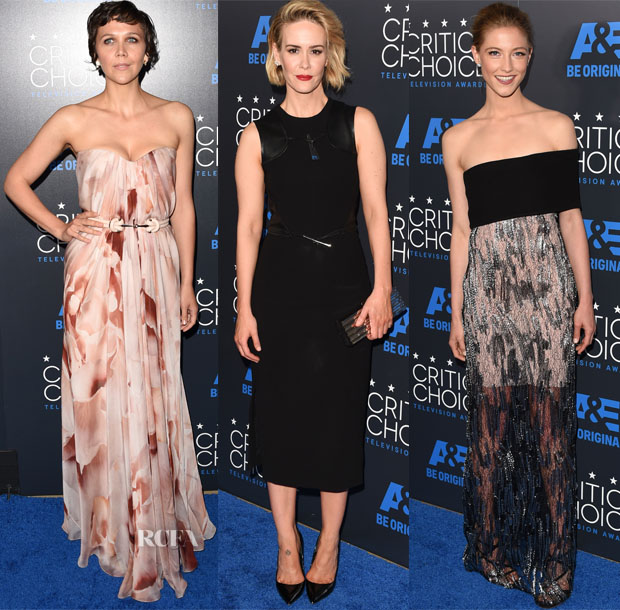 Maggie Gyllenhaal: Effortlessly sizzling with an aura of relaxed, smoldering grace, the actress donned a flowing Alexander McQueen Fall 2015 printed gown with a teint rope belt. I loved seeing this romantic sartorial side of Maggie.

Sarah Paulson: The actress wore a Prabal Gurung dress with Kurt Geiger London ‘Britton’ black pumps and a Lee Savage clutch. The structured appeal and leather accents elevated the look to exceed the typical LBD territory, as did the bright red lip.

Caitlin Gerard: Minimal accessories meant that all the focus was on this Solace London gown, which fell into the same sheer gown territory we’ve seen time and again. 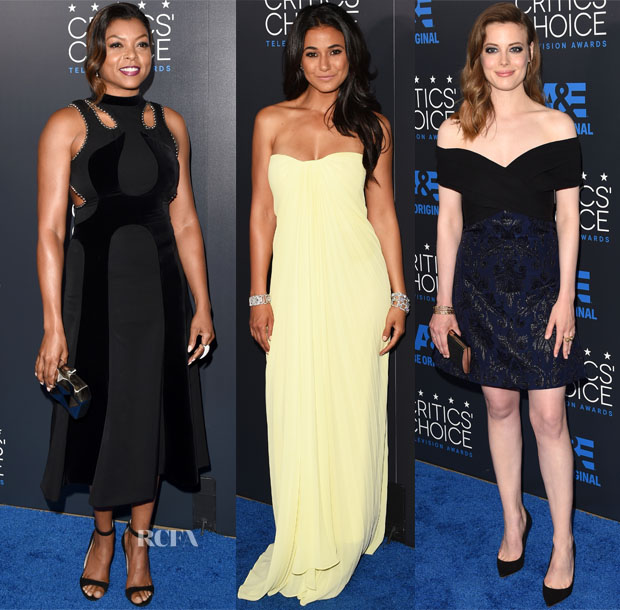 Taraji P. Henson: While I appreciate the feminine edginess of the ‘Empire’ actress’s studded Alexander Wang Fall 2015 design, the constricting neckline threw me off fully loving this look. The dress seemed to be wearing her rather than the other way around.

Emmanuelle Chriqui: While there was nothing particularly new about her Monique Lhuillier Spring 2015 Grecian-inspired gown, the lovely lemony colour was a fresh escape amidst darker looks.

Gillian Jacobs: Skipping the gown in favour of a shorter dress, she wore this black and midnight-navy J Mendel design with Sophia Webster ‘Coco Flamingo’ black pumps. A more interesting shoe or a bright lip would have helped quell my slight sense of boredom here. 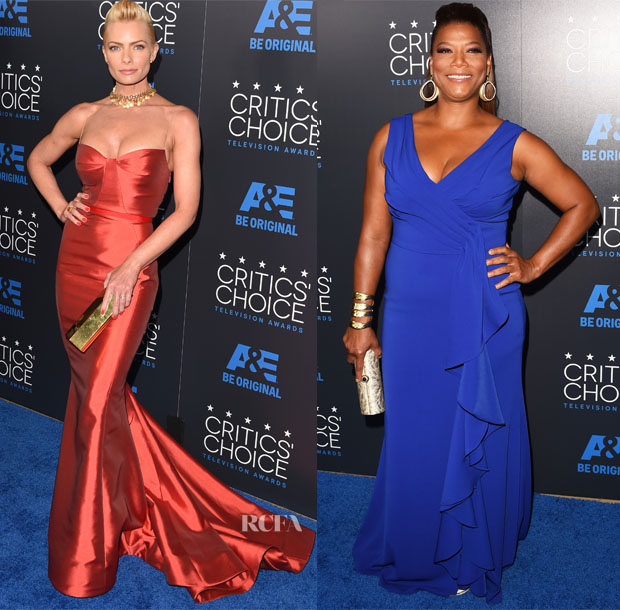 Jaime Pressly: There would be no missing this actress in her va-va-voom Gustavo Cadile crimson bustier gown accented with a gold choker and metallic clutch. I would have easily removed the necklace, especially given the stark contrast of her top-braided buzz cut ‘do, which was statement enough for this intriguing fusion of feminine sexiness and tougher edge.

Queen Latifah: The lively electric-blue colour of this Badgley Mischka gown is what sold the look—otherwise, it was just another dress with a ruffle. A Karine Sultan cuff and earrings completed the look. 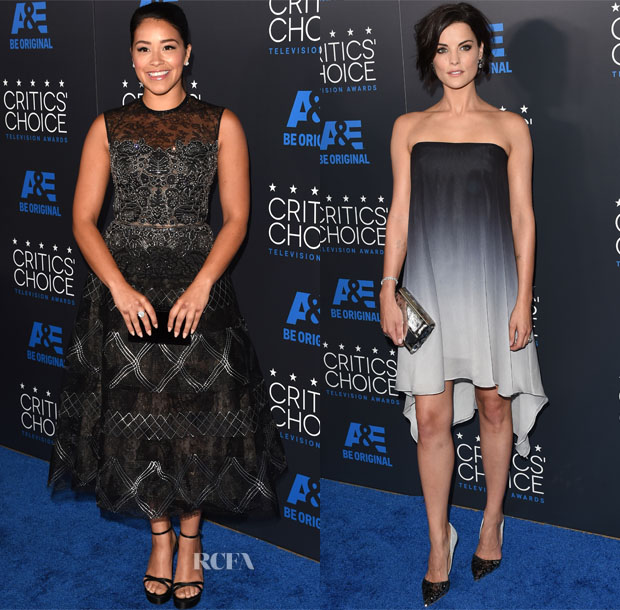 Jaimie Alexander: The actress was beautiful in a Halston Heritage Spring 2015 ombre high-low dress that had clearly been accessorized to enhance its party spirit with the shine of Kurt Geiger London ‘Bond’ silver sequin pumps and metallic handbag finished with a Pasquale Bruni diamond bracelet. I would have never missed the handbag—in fact, I would have thrown it out. 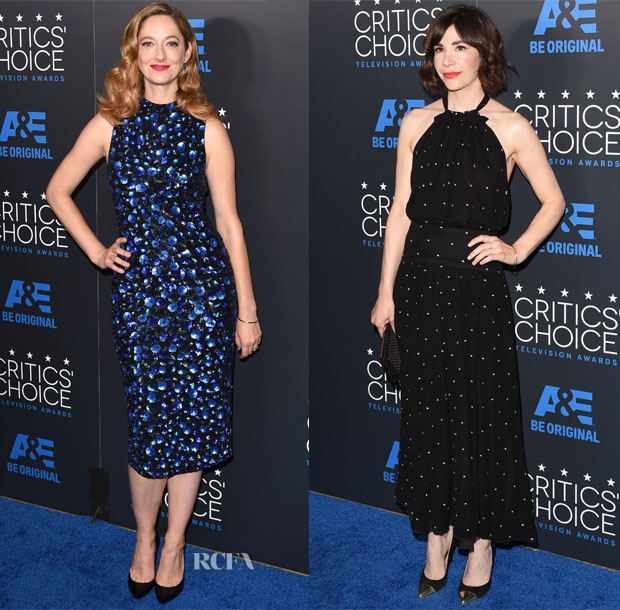 Judy Greer: Even though those black pumps fell completely flat, there was plenty of striking sass appeal in Judy’s sequin-embellished Alice + Olivia dress, Jennifer Meyer jewels, and strawberry lip to make up for it.

Carrie Brownstein: The ‘Portlandia’ star stayed true to her style in a casually effortless Philosophy black frock worn with Jerome C. Rousseau Flicker toe-cap pumps and Jennifer Meyer jewels. I’m so glad she added a bright orange lip or the look would have been a bit too sombre.