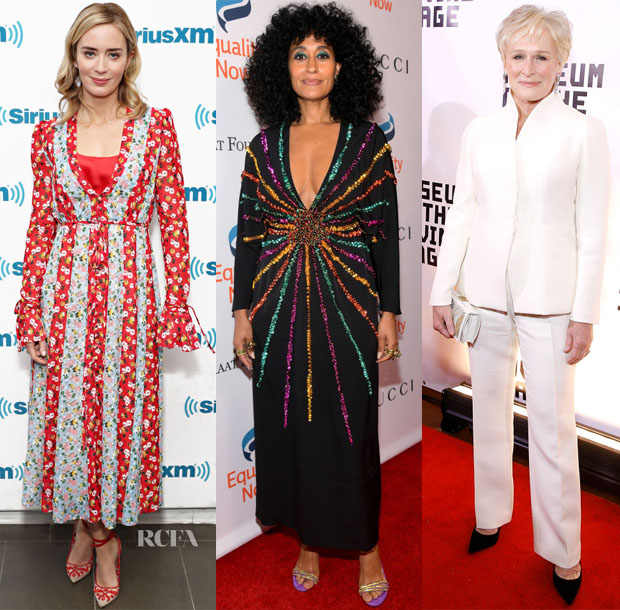 As the week draws to a close, we look back at some of the beauties who made statements on the red carpet.

Emily Blunt: The actress showcased the designer’s feminine charm in a brightly coloured Carolina Herrera Spring 2019 outfit at SiriusXM’s Town Hall with the cast of ‘Mary Poppins Returns.’ The frock will likely have many dreaming of spring.

Tracee Ellis Ross: The ‘Black-ish’ star embraced a glamorous disco spirit in Gucci Resort 2019 at Equality Now’s Make Equality Reality Gala 2018. It’s a completely different mood than the runway version and is in keeping with her bold aesthetic.

Glenn Close: Outfitted in Dior Pre-Fall 2018 with a Dior leather embroidered tarot clutch, the actress proved the merits of clean lines at the Museum Of The Moving Image Salute to Glenn Close. 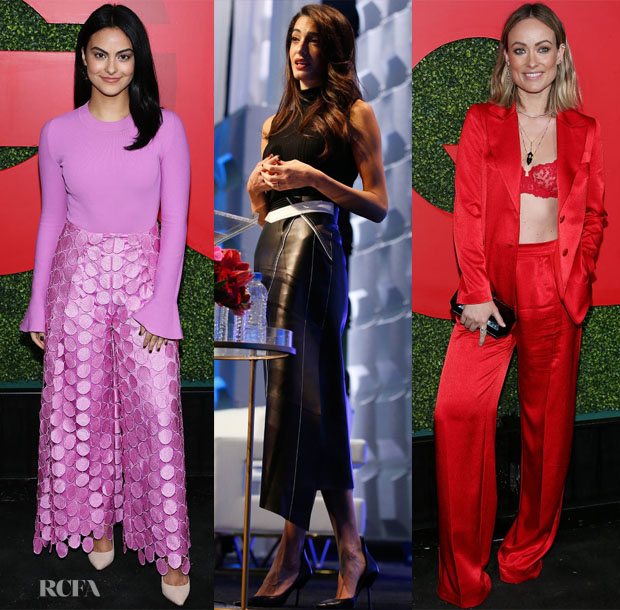 Camila Mendes: If this Solace London Resort 2019 look is feeling a bit familiar, that’s because Kiki Layne wore the black version of these trousers. As much as I loved the colour-block look, this tonal offering is so pretty.

Amal Clooney: For the Massachusetts Conference for Women, the International lawyer was looking a chic as ever wearing a Givenchy Spring 2019 look.

Olivia Wilde: The actress was a sultry lady in red Selma Cilek at the GQ party, styled with a La Perla bra. 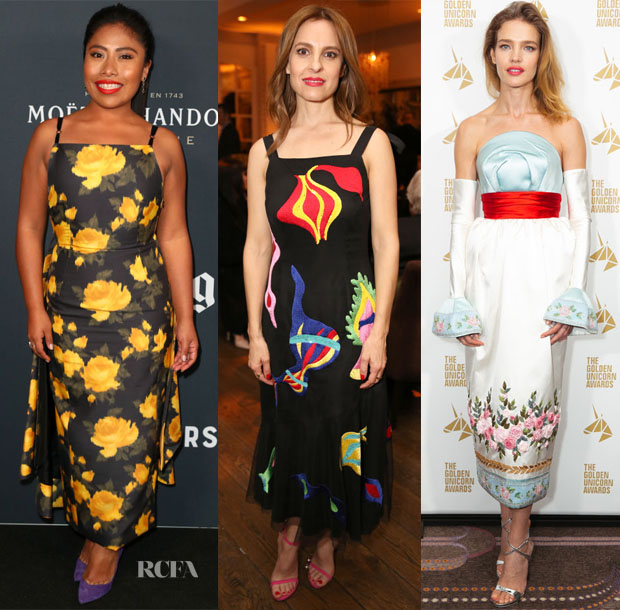 Yalitza Aparicio: The ‘Roma’ actress punctuated her Michael Kors Collection Fall 2018 frock with purple heels at The New York Times Magazine Celebrates The Great Performers Issue event. The outfit was as radiant as her smile.

Marina De Tavira: Yalitza’s costar also fell for the charms of a bold dress with brighter heels. She donned Novis Spring 2019 to the ‘Roma’ Q&A.

Natalia Vodianova: There is a lot of detail in the Russian beauty’s Ulyana Sergeenko Couture ensemble. It’s feminine and whimsical but methinks the same effect would have been achieved without the sleeves. 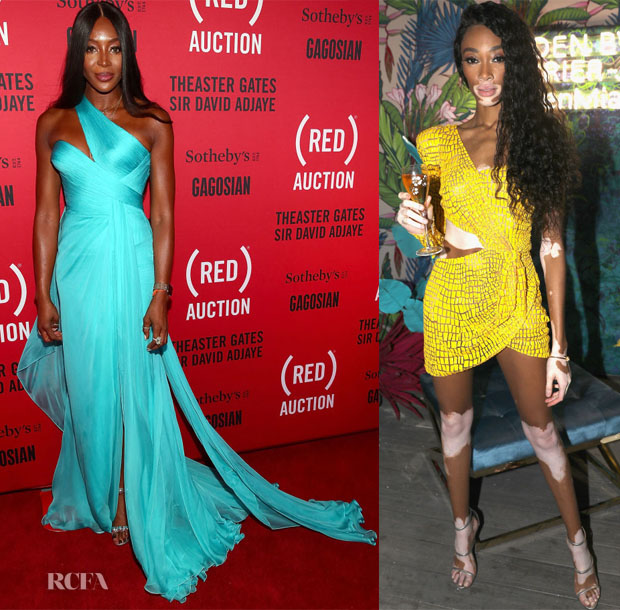 Naomi Campbell: The supermodel was a vision in Atelier Versace at the (RED) Auction 2018 photocall. She might not be in the expected hue but this was a goddess moment. 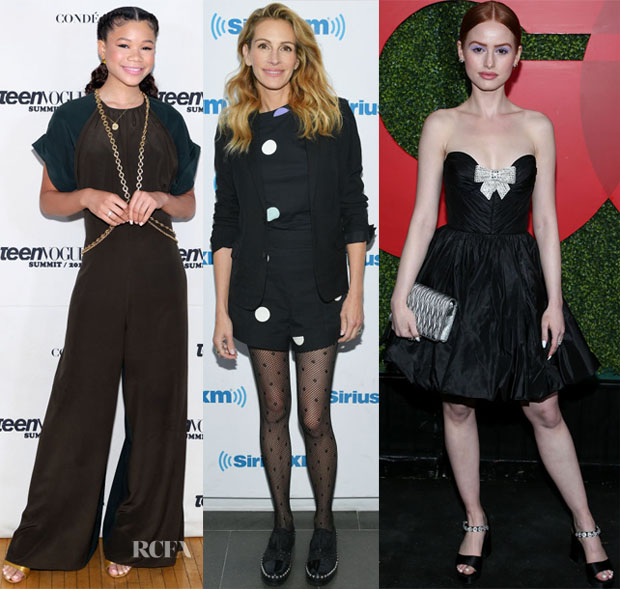 Storm Reid: The young actress showcased her grownup sense of style in Chloe Resort 2019 at the Teen Vogue Summit. The colour palette is quite mature so I was pleased to see the chain detail because it added a bit of playfulness.

Julia Roberts: She seems to have a fondness for prints at the moment, especially polka dots. After donning a spotted dress, the actress experimented with different pattern scales in Derek Lam 10 Crosby Spring 2019 at SiriusXM.

Madelaine Petsch: The ‘Riverdale’ actress’s Miu Miu ensemble had plenty of prom spirit at the 2018 GQ Men Of The Year Party. The purple eyeshadow might upstage the glittering details. 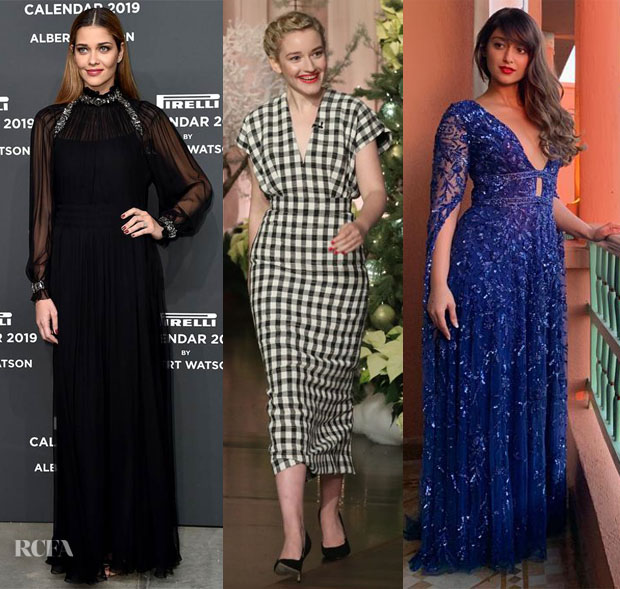 Ana Beatriz Barros: The Brazilian model joined Gigi Hadid at the Pirelli calendar launch gala. The shimmering accents on her Alberta Ferretti Fall 2018 gown made enough sparkle to rival traditional jewels. You may remember that Mindy Kaling wore this same dress to the ‘Ocean’s 8’ London premiere.

Ileana D’Cruz: The Indian actress shimmered in a custom navy blue Ohaila Khan Couture gown at the Marrakech Film Festival. It had such poetic beauty for the way the sleeves split then fall.