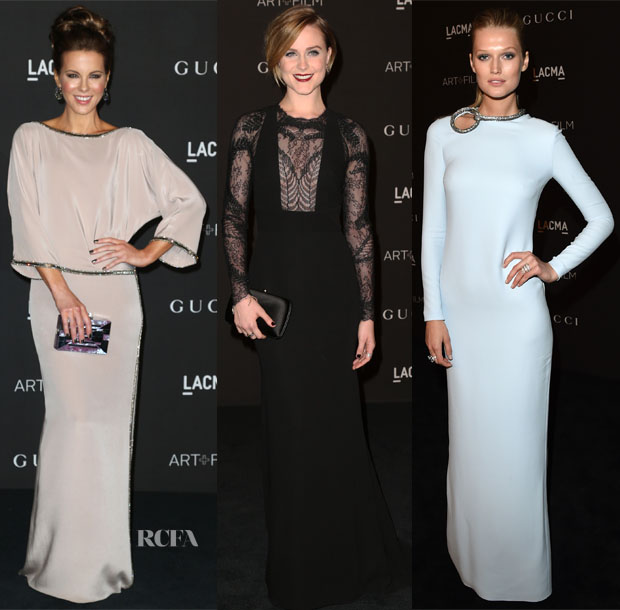 Here is a quick roundup of a few of the other Gucci-clad stars and a few others who attended the 2014 LACMA Art + Film Gala on Saturday (November 1) in Los Angeles.

Kate Beckinsale: Working an unfamiliar silhouette yet still oozing with glamour, the British actress wore a Gucci one-of-a-kind mauve gown featuring jewelled detailing, a high side slit and an open back. Swapping her favoured ponytail for a high bun, Kate styled her look with a Kotur clutch, Jack Vartanian diamond earrings and nude Gucci crystal-encrusted sandals.

Evan Rachel Wood: The face of Gucci’s Guilty fragrance wore a Gucci one-of-a-kind black long-sleeved gown infused with some gothic flavour via the lace inserts at the bodice and sleeves. A hypnotic rouge lip, black embellished Gucci heels and a black Gucci satin box clutch rounded out her look.

Toni Garrn: The model looked very statuesque wearing a pale-blue Gucci Cruise 2015 long-sleeved gown with silver crystal-embellished tubular detailing around the neckline. Letting the gown do all the talking, her hair and makeup were kept simple, with Gucci jewels adding a touch of sparkle. 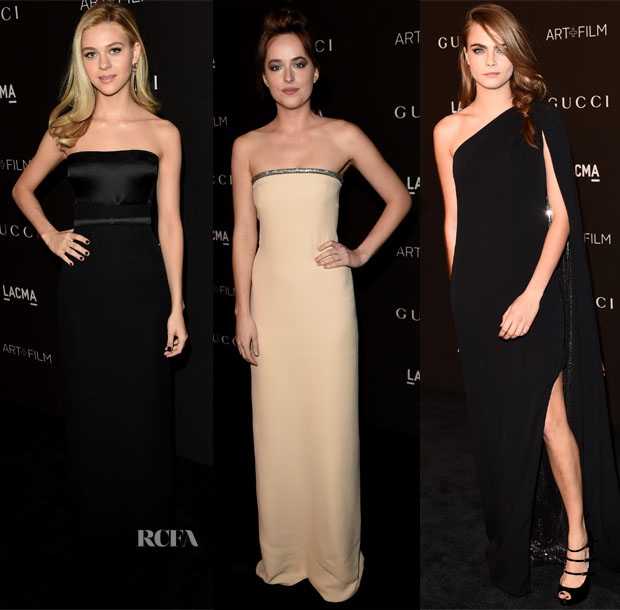 Nicola Peltz: Serving up no surprises, the ‘Transformers’ actress wore a Gucci one-of-a-kind black satin and matte silk strapless gown with a slim satin belt detail which she styled with a pair of Gucci black embellished sandals and Gucci horsebit earrings.

Dakota Johnson: My first reaction was utter disappointment upon seeing Datoka in her Gucci Cruise 2015 nude strapless gown with silver crystal-embellished tubular detail. Then I realised it’s really the hairstyle I thoroughly object to.

Cara Delevingne: Capping off a trio of actresses in Gucci Première, the model looked sleek and sexy throwing out her tomboy image and sporting a new chestnut hair colour while wearing this black silk draped one-shoulder gown featuring a cape lined with silver micro-paillette embroidery. 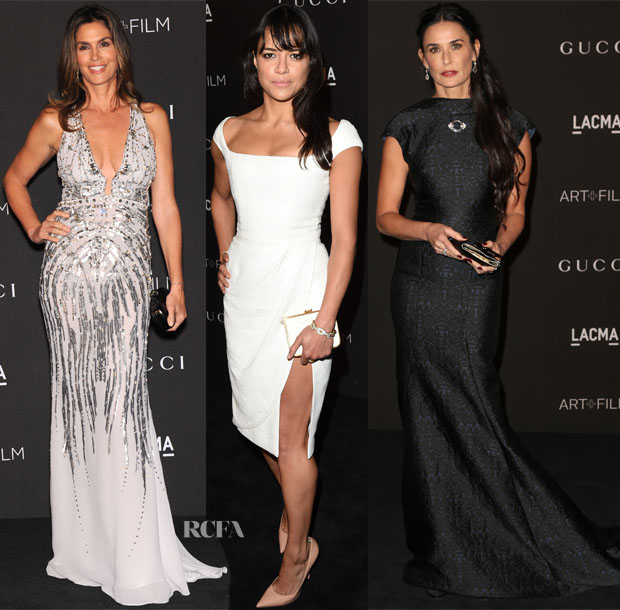 Cindy Crawford: The model didn’t wear Gucci; instead she wore a Roberto Cavalli gown which couldn’t have been a greater testament to her style. The glistening grey gown featuring a plunging neckline and silver embellishments may been seen by some as dated, but I will say classic.

Michelle Rodriguez: Never highly regarded for her style, the actress did look lovely wearing a white boucle cap-sleeved draped cocktail dress from the Edition by Georges Chakra Spring 2014 collection. Styled with a white clutch and nude pumps, she still could’ve done a little bit better in the hair and makeup department.

Demi Moore: The actress wore a Zac Posen midnight-blue jacquard open-back gown from the Resort 2015 collection. As grand as this gown is, it is surprisingly lacking in the wow-factor department. Perhaps Demi is breathing no life into it, as I can see this working on Dita von Teese.