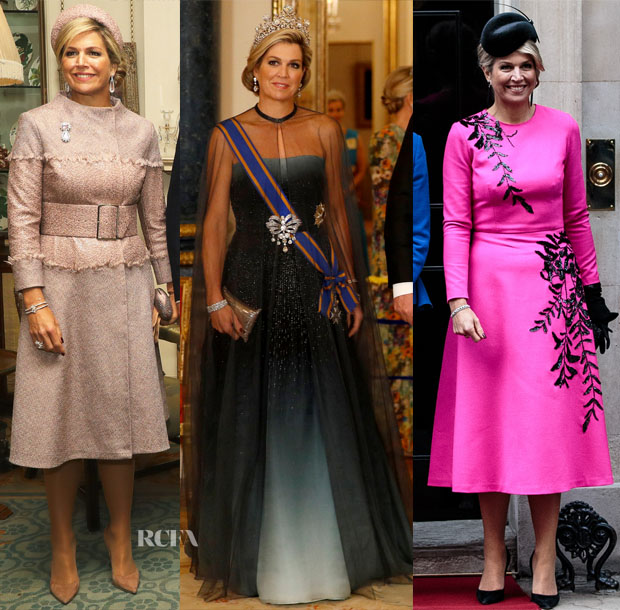 Queen Elizabeth II hosted the King and Queen of the Netherlands for the first UK state visit by Dutch monarchy for 36 years this week.

Day 1: King Willem-Alexander and Queen Maxima of the Netherlands were treated to a grand ceremonial welcome as they arrived for their first UK state visit on Tuesday (October 23). Queen Maxima, who is known for her ultra-chic wardrobe, showed off her sartorial prowess in a bespoke Claes Iversen skirt suit styled with Gianvito Rossi pumps. My wish for this look would be for a smaller belt.

State Dinner: For this grand occasion, which was also attended by Kate Middleton, there was only one designer the Queen would turn to; Jan Taminiau of course. The Queen and the Dutch designer have had many magic moments together and this ombre gown with sheer cape ranks highly. The Dutch royal’s outfit was accessorised with an extra-special headpiece – the Stuart tiara featuring the Stuart diamond – which made its first appearance since Queen Juliana’s 1972 State Visit to the UK.

Day 2: On Wednesday (October 24), the Queen showcased her love for bold colour wearing a beautiful bright pink dress with black floral detail by Oscara de la Renta, teaming her long-sleeved dress with accessories. The royal’s outfit was breath taking with its vibrant hue and I just love the retro silhouette.

Queen Maxima of The Netherlands speaks with David Stanton, Canon of Westminster during a visit Westminster Abbey

Queen Maxima Of The Netherlands Visits I...