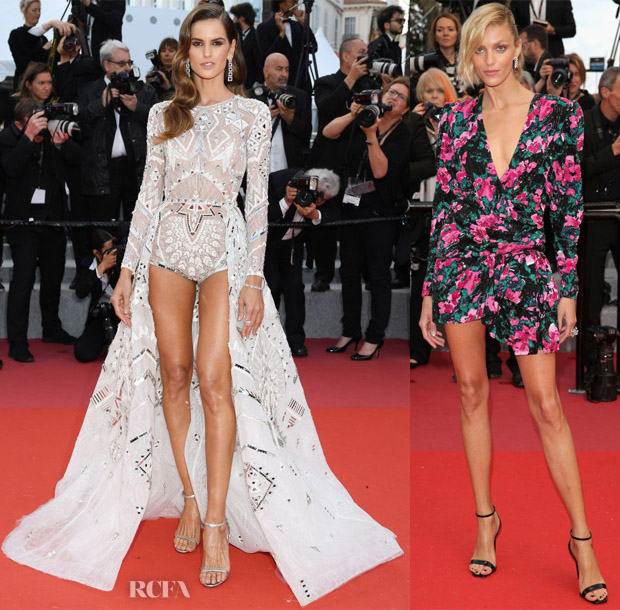 There were so many more Cannes lovelies who were out in force for the ‘Sink Or Swim (Le Grand Bain)’ Cannes Film Festival premiere on Sunday (May 13).

Izabel Goulart: Some of you may be thinking what happened to the front of this signature embellished Zuhair Murad Spring 2018 Haute Couture bodysuit-gown fusion. But, the model has legs for days and she showed them off in top form with this enchanting moment that measured its sexiness by a moment of fairytale allure in the long embellished train. Naturally, Chopard jewels were a perfect finish.

Anja Rubik: As vibrant as this Saint Laurent Fall 2018 floral mini was, it seemed better suited to a daytime photocall than a red carpet premiere. 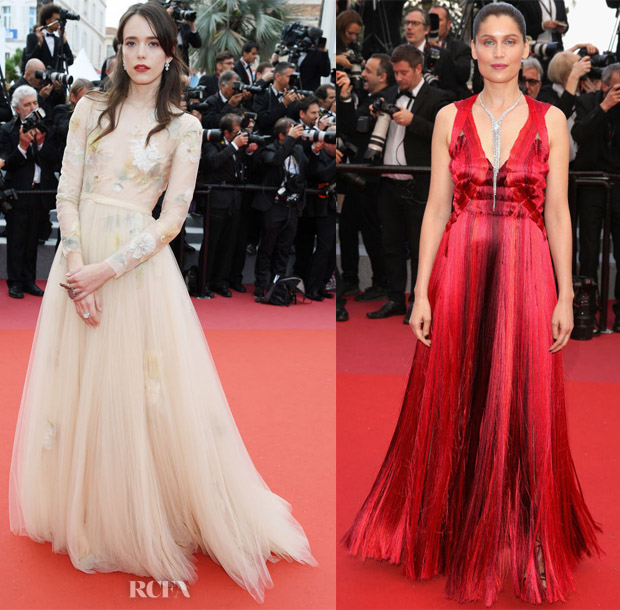 Stacy Martin: The princess vibes were strong in this wispy, soft Dior Spring 2017 Haute Couture gown with tonal floral throughout for added dimension.

Laetitia Casta: I especially loved this Alexander McQueen Fall 2018 gown from the waist down, as the movement of all the long micro fringe was entrancing. The necklace was a bit extraneous, but this is Cannes so a diamond addition is practically a necessity. 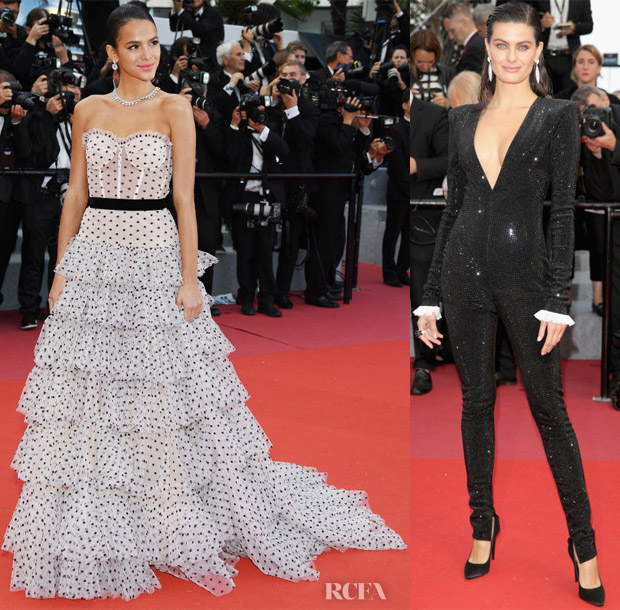 Bruna Marquezine: Polka dots may seem rather girlish and even casual for Cannes, but this Philosophy di Lorenzo Serafini corset gown with its cascade of ruffles was sophisticatedly grown up despite its more playful mood.

Isabeli Fontana: If you are going to wear a glitzy jumpsuit at Cannes, it really needs to have an impeccable fit. So, that was my biggest qualm with this Philosophy di Lorenzo Serafini design, as it simply did not have that sleek finish, what with the slouch of the sleeves and pant. A splash of de GRISOGONO jewels contributed extra sparkle. 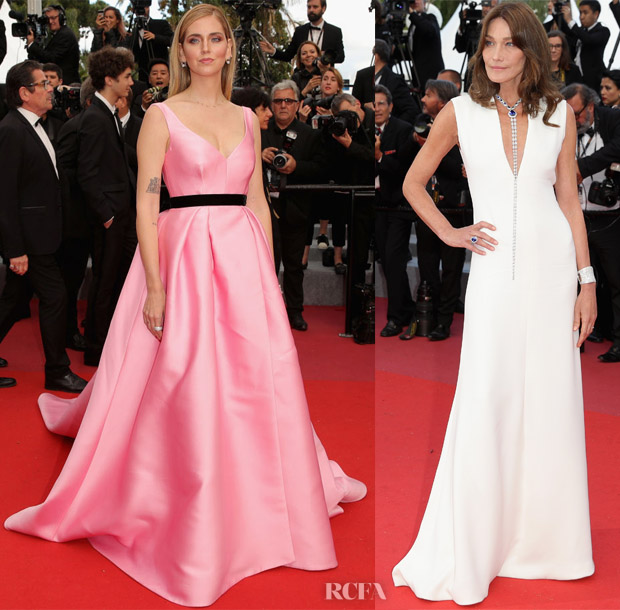 Chiara Ferragni: With a pretty-in-pink moment, Chiara kept it classic in an Alberta Ferretti ball gown with the black waistband ensuring the elegance of the bubblegum hue. 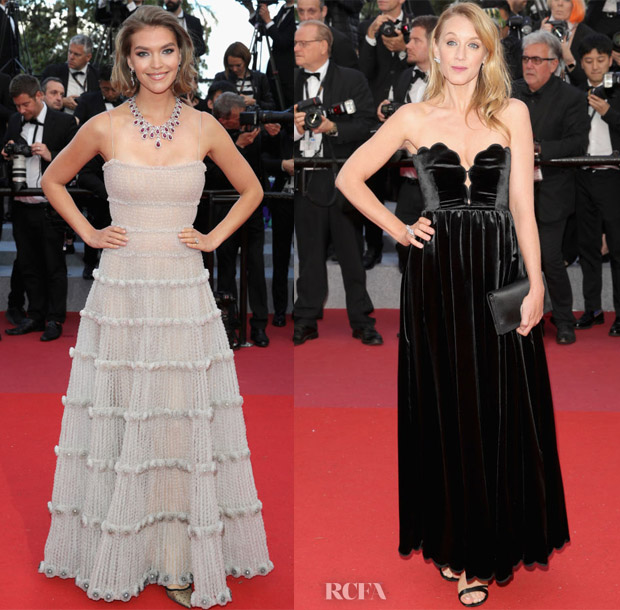 Arizona Muse: This Christian Dior Fall 2017 Haute Couture semi-sheer gown would have been forgettable were it not for the array of ruby-red Chopard jewels around her neck.

Ludivine Sagnier: There was a touch of black magic in this velvet Valentino Fall 2018 gown. Despite the Chaumet jewels, it left me underwhelmed. The matte black clutch was also a bit of a downer. 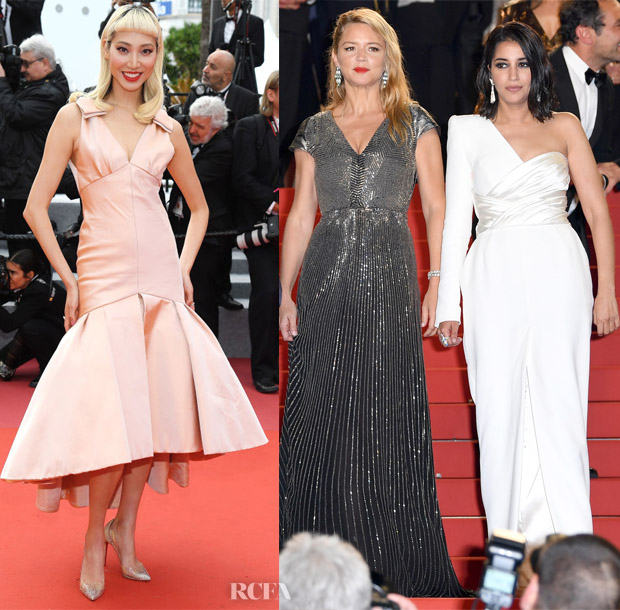 Soo Joo Park: I admire her for donning the flirty, quirky playfulness of this Chanel Spring 2018 Haute Couture frock that looked to a vintage-inspired glamour to create another level of girlish-glam dimension with nary a sequin needed.

Virginie Efira: This scintillating Schiaparelli Fall 2016 Haute Couture dress could be considered conservative both by the design house’s standards and by Cannes standards, too. I was craving the runway’s bold shoulder and colourful vine of embellishment.

Leila Bekhti: Something felt a bit dated about this asymmetry of this creamy-white Alexandre Vauthier dress, wrapped in satin.