Madeline Brewer was one of the beauties at ‘The Handmaid’s Tale’ Season 2 premiere on Thursday (April 19) in Hollywood, California. She joined Sydney Sweeney, Alexis Bledel and Elisabeth Moss.

The actress brought the feminine glamour in a Carolina Herrera Pre-Fall 2018 dress.

There is a vintage mood, but it’s not the expected retro look. The contrasting asymmetrical neckline paired with the floral embroidery add more dimension to the ensemble.

Her accessories brought some megawatt shine. She completed the look with Hueb diamond earrings, an Abdullah Chancellor diamond ring, Gucci shoes and a Jimmy Choo clutch.

Some might wish for a black shoe, as per the lookbook. The gold ankle-strap shoes play up the yellow in the floral decoration and coordinate with the bag. 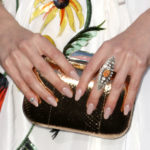