The list of lovelies at Harper’s BAZAAR Celebrates ‘ICONS By Carine Roitfeld’ on Friday (September 8) in New York City was seemingly unending, as a number of stars joined Nicki Minaj, Selena Gomez, and Kim Kardashian.

Gigi Hadid: Her hyper-embellished Dolce & Gabbana Fall 2017 ensemble, styled with Lorraine Schwartz jewels, was so intricate and powerful of a statement that it really didn’t require the rhinestone clogs.

Kaia Gerber: Cindy Crawford’s model daughter was all grown up in a slinky Kristian Aadnevik Fall 2017 mini that had her looking like her mom more and more.

Kendall Jenner: There was little left to the imagination in this Dolce & Gabbana ruched, sheer number. Yet, ironically in spite of the see-through, I couldn’t help but still get a certain sophisticated, glam vibe with the look, which I will chalk up to its silhouette along with Kendall’s Old-Hollywood waves, Lorraine Schwartz jewels, and Jimmy Choo sandals.

Winnie Harlow: The model floated about in a cloud of lavender whimsy in this Marchesa Resort 2018 confection contrasted by her sculptural topknot.

Lindsay Ellingson: This custom-made Markarian metallic-purple dress from the Spring 2018 collection was clearly made to show off her gam game.

Praya Lundberg: Praya worked this Dolce & Gabbana ensemble to her advantage, posing at the side to reveal the sultry lace motif.

Karlie Kloss: The supermodel didn’t choose girls or gams, instead flaunting both in this Alexandre Vauthier Fall 2017 Couture gown—although a slightly more moderate plunge would have been preferred as this one seemed rather gaping. GIuseppe Zanotti sandals completed the typically sexy Vauthier look.

Jared Leto: The actor continued his wardrobe antics in this Gucci Fall 2017 suit that will likely not be received favourably, as it’s just to comically try-hard. You may remember that Bryan Boy just wore this look, but at least his outing was properly tailored without the pants scraping the ground.

Leomie Anderson: Did I say Kendall’s look left little to the imagination? I’ll have to retract that, as Kendall looked positively modest compared to this see-through Versailles Boutique jumpsuit.

Larsen Thompson: The starlet continued to impress with her style-forward sensibility in this Andrew Gn Spring 2017 floral-embroidered dress, which wouldn’t have been much to write home about had it not been for the quirky intrigue of the sculptural shoulder. The Paul Andrew pumps were an afterthought for me, as I would have preferred a sandal that echoed the burgundy or green hues of the frock.

Bella Thorne: While this Pamella Roland Fall 2017 design was a marked improvement from Bella’s last outing, it was still compromised by the styling. Her hair was rather ageing at best, with the necklace and timepiece confusing additions to the glam gown.

Vanessa Hudgens: Despite the butterfly print that alighted across this Jeremy Scott gown, the mood was more gothic perhaps due to the Elvira-inspired locks.

Sofia Richie: The sexy edginess of a Julien Macdonald design was fully celebrated in this Fall 2017 mesh gown. I wasn’t a huge fan of the dress, but the styling made even less sense with the mussed-up, beachy waves and red Giuseppe Zanotti sandals.

Paris Jackson: I think this multi-coloured, boho beauty of this archive Jenny Packham ruffled gown would have translated so much more successfully had Paris opted for a sleeker hairstyle

Nicky Hilton Rothschild: If anything, I would say Nicky’s look was experiencing a case of multiple personalities. The Ester Abner Resort 2018 baby-doll dress and ponytail had a playful, girly mood, with the design’s lacy long skirt and diamond jewels copping a far more sultry-glam attitude. It left me confused.

Issa Rae: The actress turned up the glitz in a Pamella Roland Fall 2017 gown that sparkled for the right reasons.

Joan Smalls: The see-through memo was not lost on Joan with this Zuhair Murad Fall 2017 Haute Couture gown that was striking in its embellishment and feathered skirt, to be sure. But, given its sheer quality, it seems so familiar.

Jamie Chung: Jamie nearly appeared to be swimming among scarf prints, as this Robert Cavalli Spring 2017 patchwork gown puddled on the floor around her.

Julia Restoin Roitfeld: Sharp, sexy, and minimal, there is something to be said for seductive simplicity as in this Alexandre Vauthier Fall 2017 Couture dress—although some may wish for slightly less au naturel locks and makeup.  A Giuseppe Zanotti clutch completed her look.

Nicola Peltz: It appears as though Nicola must have been in a rush and forgot to put her party dress on; she did have her party panties on with this Christian Dior bralette and logo slip.

Hailey Baldwin: This KaufmanFranco Resort 2017 metal sequin gown was a sophisticated look for Hailey, but with the heavily winged eyeliner and teased ponytail, I was getting a slightly dated effect, too.

Jourdan Dunn: The bold shoulders signature to a Mugler design were present and accounted for in this hot-pink Resort 2018 suit. With such a sharp silhouette and eye-popping colour, I would have kept the footwear in a tonal pink or black as opposed to bright white.

Cara Santana: Cara had a paillette party with this Galia Lahav Couture gown that featured a mesmerizing mix of turquoise and red hues.

Carine Roitfeld: Opting for classic glamour, the guest of honour donned an Oscar de la Renta Fall 2017 gown, with the structural corset bodice softened by the swoop of the skirt. Blake Lively wore the runway version.

Victoria Justice: I can see this Kristian Aadnevik Fall 2017 mini at an event like the Teen Choice Awards, but here, it translated as a bit rebellious-twee—especially with the booties and updo.

Adriana Lima: This glittery Redemption gown was slit precariously high, so I can understand why she posed with the Giuseppe Zanotti clutch placed just so. Embellished Giuseppe Zanotti sandals completed the overtly sexy look.

Sara Sampaio: The strange eclecticism of this look left me mystified, between the Mach and Mach Fall 2017 corset gown and its sheer slip skirt all tied up with a grommet belt, to the overly glam Jacob & Co earrings, dramatic oxblood lip, and odd Sergio Rossi shoes. It was like she was wearing six looks in one—plus her lingerie shapewear.

Jasmine Tookes: In dire need of a steam, this Acler dress was still styled well with Jasmine’s Gianvito Rossi sandals and Ritani jewels.

Nadine Leopold: With pasties in play, the end result was a rather flattened bodice look that was nothing if not bizarre in this Marchesa mesh gown. Chopard jewels completed her look.

Heidi Klum: Another day, another questionable look for Heidi. Unfortunately, I don’t believe she redeemed herself in this Redemption Fall 2017 mini dress that showed off her favoured asset—her pins—but in dated fashion. Lorraine Schwartz jewels and Christian Louboutin heels finished the look that was also wonting for a sleeker hairstyle. 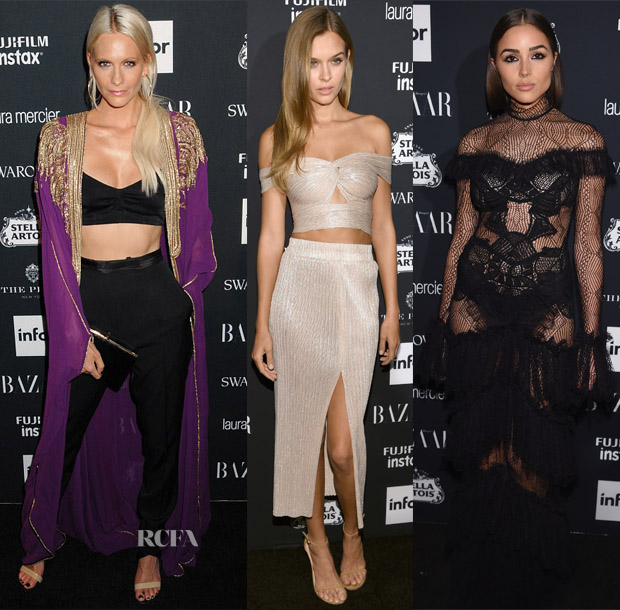 Poppy Delevingne: There were a lot of sheer looks on this red carpet, but Poppy didn’t follow that trend. Instead this look was all about her abs, donning a Dundas Resort 2018 look, making the embroidered cape the focus.

Olivia Culpo: After scrolling to the bottom of this post you are by now fully fatigued by sheer looks, so I’m sure you will just gloss over Olivia in this Jonathan Simkhai Resort 2017 frock.

Nina Agdal: Proving that evening dressing doesn’t need to be sheer, Nina’a Galvan black crepe gown is skillfully cut for a sensual fit. The look had touches of sparkle via the belt, clutch and necklace which perhaps this look didn’t need. My favorite part of this look are her Gianvito Rossi Opera leg wrap sandals.

Shay Mitchell: The actress’s dress was anything but demure with it lace side panels and slit.

Candice Swanepoel: The model served up an interesting take on the pajama trend wearing a luxe embellished two-piece look. It was a brave choice two as the blouse didn’t appear to be taped down, as the model can seen holding it close to her chest in every picture.

Cara Delevingne In Aadnevik – The ...