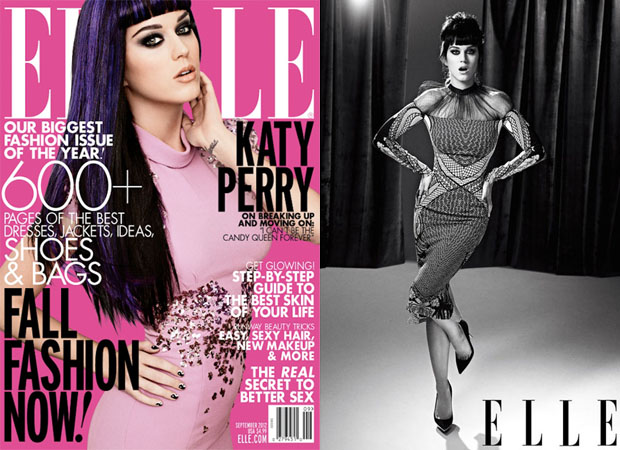 Back when she was sporting purple hair, Katy Perry shot the cover for Elle’s September 2012 issue wearing a Bottega Veneta dress, which Salma Hayek wore to the ‘Prometheus’ London Premiere, plus a black-and-white Yin and Yang manicure.

The singer also wears a printed Etro dress and YSL for the Carter Smith shoot whilst dishing to Elle about everything from her career, being a role model, marriage and relationships.

The magazine hits newsstands on August 14. Head over to Elle.com to read more or check out the highlights below.

On relationships and marriage: “I obviously have a lot to say right now…I’m a woman who likes to be courted – strongly. Never say never, I guess you’d say. I’ll let love take the lead on that.”

On being a role model: “I have no regrets…I’m not going to be everything to everyone. I can’t tell a person when it’s time for them to have sex. Or if they should have a cigarette…But I try to live my life with a lot of integrity, and, hopefully, that sends a message.”

Credit: Carter Smith for Elle US

Posted by Catherine Kallon on August 3, 2012 In: Katy Perry

8 Responses to Katy Perry For Elle US September 2012