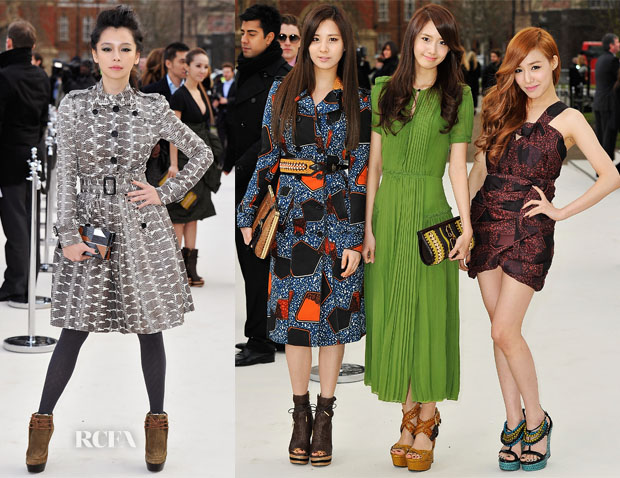 The front row of the Burberry Prorsum Fall 2012 show was jam packed with celebrities from all over the world, proving that Burberry is truly a global brand loved the world over.

The first to arrive were the Asian actresses.

‘Girls Generation’: Thankfully, Seohyun, Yoona and Tiffany gave us some interesting shoes to drool over. I also need to thank them for giving us three very different looks from the Burberry Prorsum Spring 2012 collection. Seohyn wore a tribal-print coat, Yoona kept her look sweet wearing an emerald-green keyhole dress with a pleated bib, and Tiffany opted for a sexy ruched mini-print dress which is considerably shorter to the dress presented on the runway. 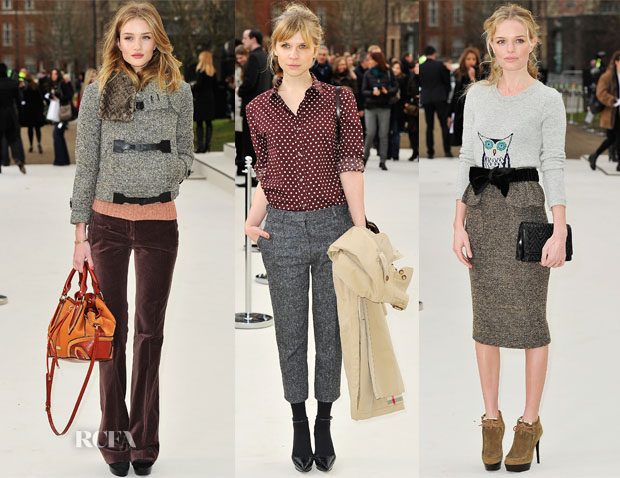 Clemence Posey: The French actress is so naturally beautiful and unassuming. She opted for a typically laidback, chic look which included a polka-dot shirt, tweed cropped pants and a Burberry trench.

Rosie Huntington-Whiteley: The model arrived with a 7ft bodyguard; obviously Burberry wanted to keep their favourite model well guarded at all times. She opted for a Pre-Fall 2012 look which included a tweed jacket and the same bag from the lookbook. The look got even better inside the venue when she removed the jacket to reveal a short-sleeved velvet-bow-accented sweater.

Kate Bosworth: The actress, wearing a Pre-Fall 2012 look, was joined in the front row by her beau. The owl-motif sweater was featured in the Fall 2012 collection also, so it looked like she was ahead of the trend. A tweed skirt, black velvet bow waistband, ankle boots and a black clutch completed her look. 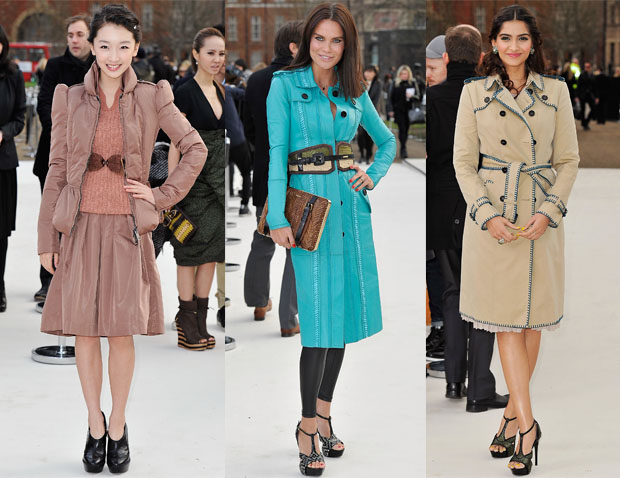 Dongyu Zhou: The Asian actress looked super cute, from the ankle up, wearing a dusty pink look from Burberry’s Pre-Fall 2012 collection with a bow accent around her waist.

Ebru Salli: You couldn’t miss the Turkish model in the front row as she opted to wear a bright turquoise Burberry Prorsum Spring 2012 leather trench coat.

Sonam Kapoor: The Indian actress was seated front row between Wil.I.Am, who arrived late, and boxer Amir Khan. I wasn’t too crazy about her trench coat, but I loved the beige chiffon dress she wore inside the venue. It was much more suited to her style.