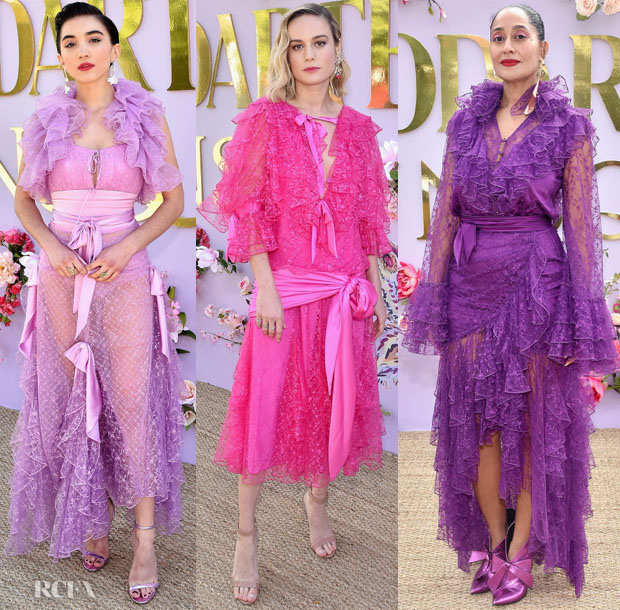 The Rodarte Fall 2019 show at the Huntington Library in Pasadena, California on Tuesday (February 5) was a delight of ruffles, lace and sheer details.

Rowan Blanchard: ‘The Girl Meets World’ actress showed off her developed sense of style in a Spring 2019 dress with APM Monaco jewels and Nicholas Kirkwood ‘Mira Pearl’ sandals. It oozed princess romance, but not in the typical manner.

Brie Larson: The ‘Captain Marvel’ actress was all wrapped up in a frothy Spring 2019 dress. The silk tie echoes the daintier bows on the neckline for a charming finish.

Tracee Ellis Ross: Never one to miss the chance to fully commit to a look, the actress was working her Spring 2019 outfit with all its lacy ruffles. The coordinating shoes were less jarring than the runway version. 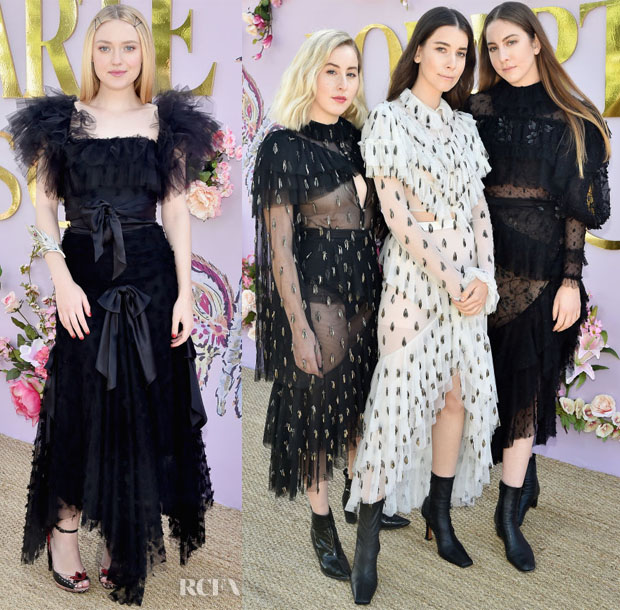 Dakota Fanning: She switched gears by channeling a bewitching mood in inky Spring 2019. It’s the finishing touches that really help bring the ensemble to life and show her innate sense of the brand.

Alana Haim: Also projecting a darker sentiment, the Haim band member showed some skin in a ruffled Spring 2018 piece. The unlined finish adds some major rocking spirit and sexiness to the frills. It’s a difficult look to pull off, but she did.

Danielle Haim: Alana’s sister went for a less directional look in a Spring 2018 dress. That’s not to say that the style was less striking. It was brimming with off-kilter sweetness.

Este Haim: Always known for projecting a coordinating (but not necessarily matching) look, the musician donned her best sheer black Spring 2018 dress which was at once witchy and sultry. I’m curious to see how the square-toed boots will be received with her and Danielle’s looks. 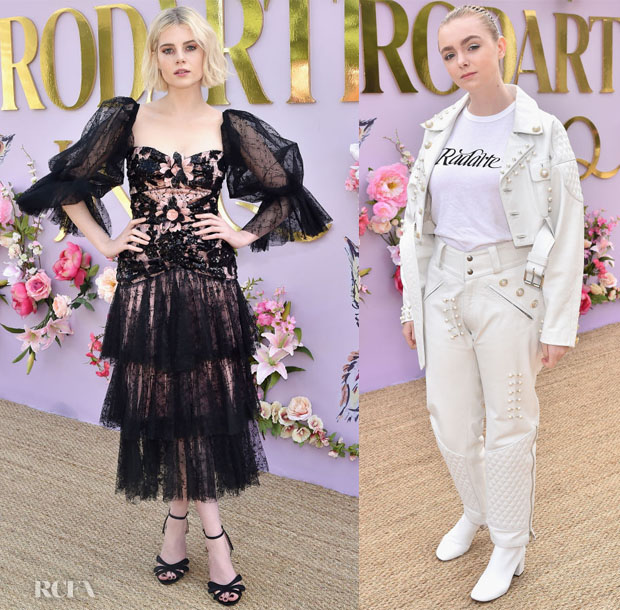 Lucy Boynton: The ‘Bohemian Rhapsody’ actress struck a pose in a dramatic Fall 2018 dress with Chloe Gosselin shoes. Her lack of jewellery allowed the encrusted bodice and pouf sleeves to remain the focus.

Elsie Fisher: Boots and cool tailoring are becoming something of a signature for the young star and this Spring 2018 ensemble played right into it. The structure and clean lines were a nice break among all the frills. 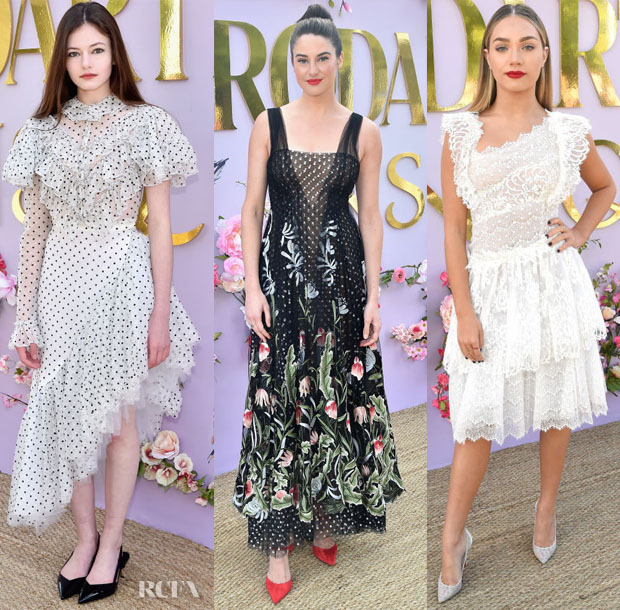 Mackenzie Foy: ‘The Nutcracker and the Four Realms’ actress looked enchanting in Spring 2018. Blending the crop top with the skirt from the runway is a subtle change that makes a difference. The low shoes were a fresh take and suited someone of her 18 years.

Shailene Woodley: A Rodarte supporter, she wore a layered Fall 2018 dress with ease. The fusion of classic fabrics and the red pumps is effortless. There’s a timeless quality about it.

Maddie Ziegler: The dancer had a fairy tale moment in Fall 2017. Like Shailene’s look, there is a classic feel to the style. It’s still interesting with the dynamic lace and it carries the right amount of sweetness. 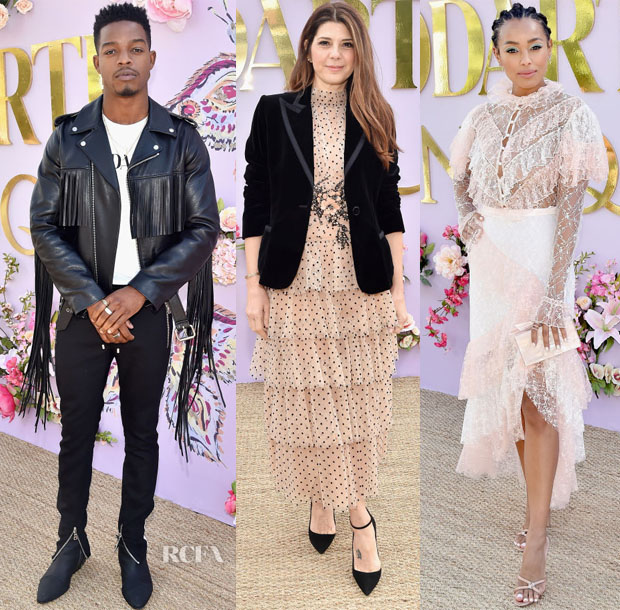 Marisa Tomei: The addition of the inky blazer completely changed the mood of her Spring 2018 tiered dress. It didn’t feel disconnected thanks to the black polka dots and heels.

Melanie Liburd: The ‘This Is Us’ actress made her Fall 2018 dress her own with her Giuseppe Zanotti shoes and finishing touches. The red in the lookbook gave it a wicked magical edge and removing it brought the delicateness back. 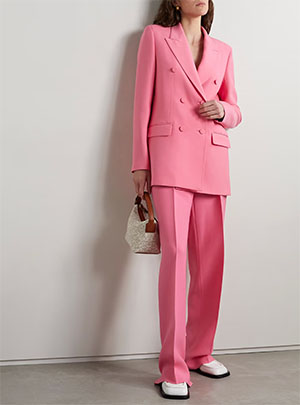 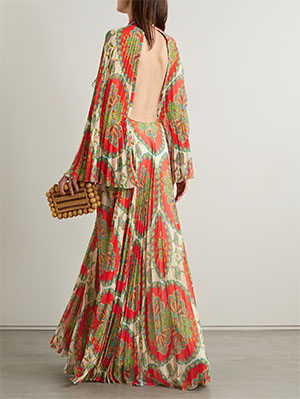 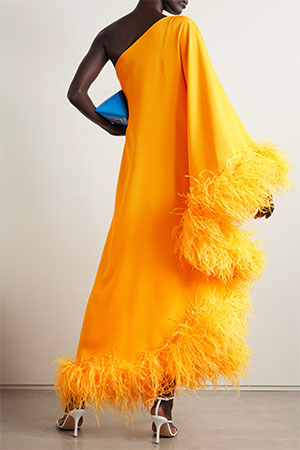 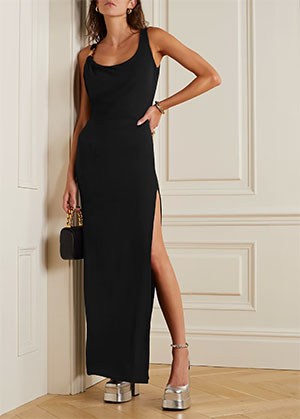 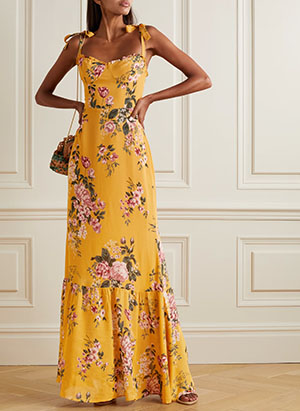 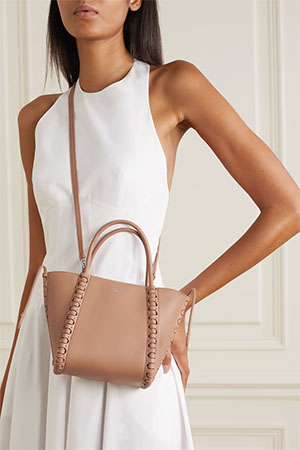 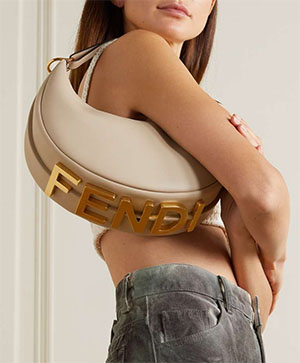 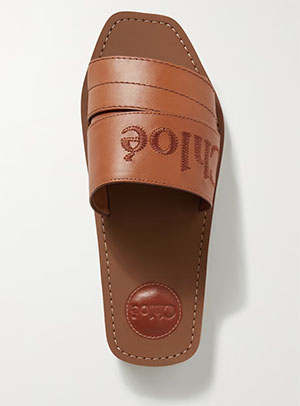 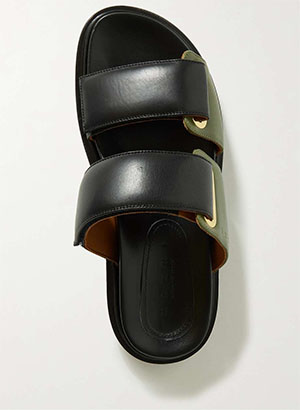