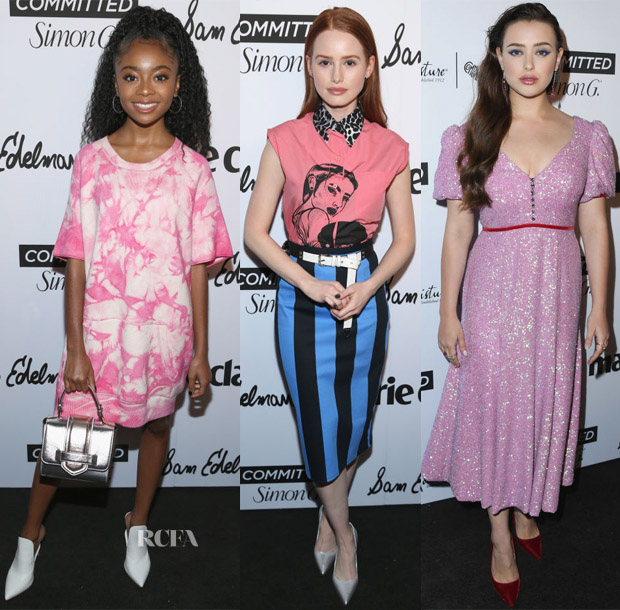 Skai Jackson: The Disney actress looked sweet in Michael Kors Collection Spring 2018. This is not the first look I would have expected from the designer with his classic, minimalist aesthetic, but think it suits her to a tee. The white and pink tie dye print and oversized T-shirt dress design are fun and feminine. The accessories also add fashion-forward appeal.

Madelaine Petsch: Opting for coordinates, the ‘Riverdale’ actress wore a head-turning Prada Spring 2018 look. Some might crave a cleaner finish, but everything is working from the stripes to the leopard spots to the graphic print in the Prada printed blouse. It presents a sophisticated rock ‘n roll sentiment.

Katherine Langford: The ‘Marie Claire’ cover girl embraced a retro romantic mood in a Markarian custom Fall 2018 dress. While the belted silhouette might be classic, the glittery pale pink fabric with red accents brought it into modern times. 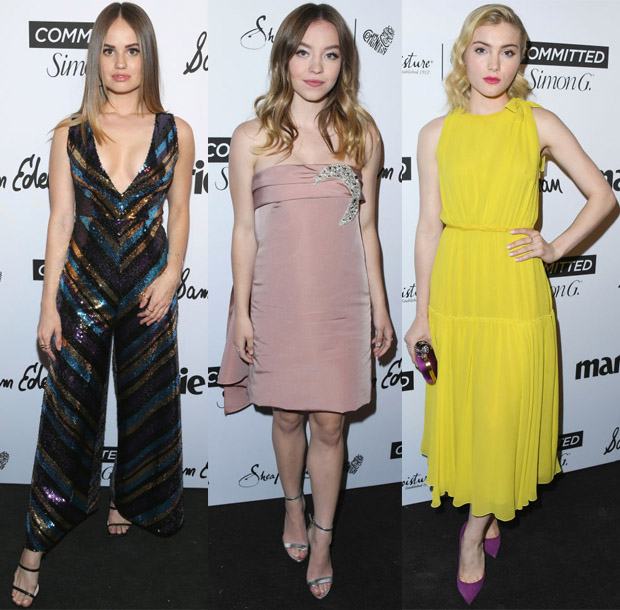 Debby Ryan: The actress-singer took the plunge in a Giamba Spring 2018 jumpsuit. Despite being constructed out of a striped sequin fabric, there’s a carefree feel to the style. The wide-legged pants balance out the open neckline. With such a striking print, she was smart to keep her accessories and beauty look understated.

Sydney Sweeney: After a divisive outfit, she stepped out in a Reem Acra Fall 2018 dress. The colour on the red carpet comes across as more muted than the lookbook version and was in danger of washing her out. It’s too bad the whimsical bow on the back wasn’t more visible from the front.

Skyler Samuels: Looking merry in yellow, the former ‘Scream Queens’ actress turned heads in Giambattista Valli. It has a refined femininity and doesn’t come across as too try-hardy. The rich purple accessories and pink lipstick were a dynamic twist. 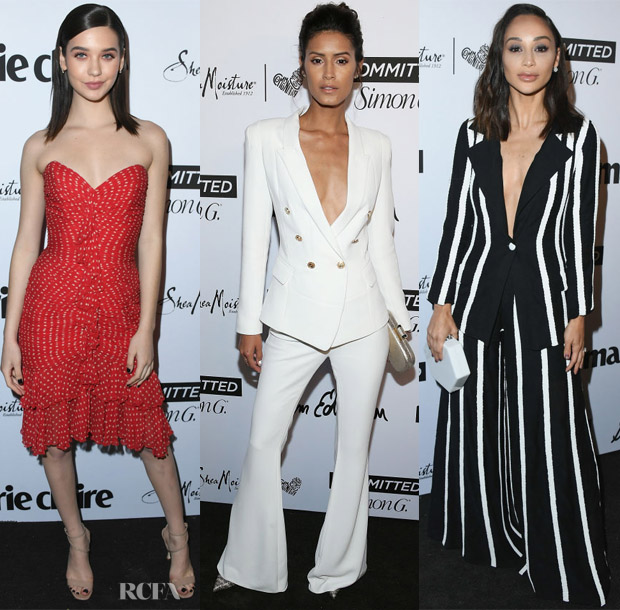 Amanda Steele: The model and actress’s red polka dot dress has a flirty finish thanks to the diminutive spots and flourish of frills. Her sleek hair and dark nail polish are a nice contrast as opposed to going in the obvious vintage direction.

Jaslene Gonzalez: The model went for a white hot moment in Barrus London, styling the jacket sans shirt. With its minimalist palette, every detail has to be perfect so the too-long trousers are distracting. I’d also like to see the jacket neckline raised slightly for a cleanser finish.

Cara Santana: Also clad in separates, she wore a bold John Paul Ataker design. Between the graphic pattern and the long lengths, it is overwhelming. The vertical stripes do have a lengthening effect, but there’s just too much fabric. Not even the open neckline can balance it out. 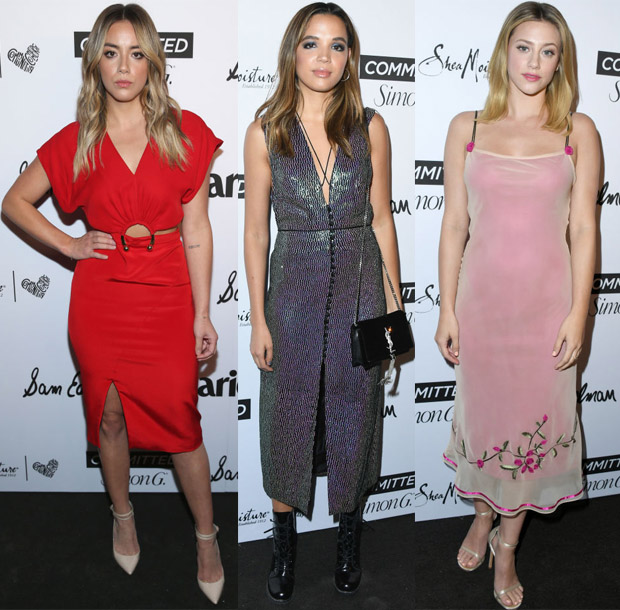 Chloe Bennet: The ‘Agents of S.H.I.E.L.D.’ actress commanded attention a rich red Haney look. The colour is the show-stopper with everything else supporting it.

Georgie Flores: Another one in Markarian, she was clad in a dress from the Spring 2018 collection. She added some edge to the prismatic fabric with a Saint Laurent bag and boots. The punky twist is fun, but these specific accessories let it down as they overshadow the detailing on the style.

Lili Reinhart: Many will be pleased to see the ‘Riverdale’ actress wore a slip under this simple netted dress, but I’m curious to see how the style will fare overall. It’s sweet and pretty, but it might be a bit too ho-hum in comparison to other bolder looks. 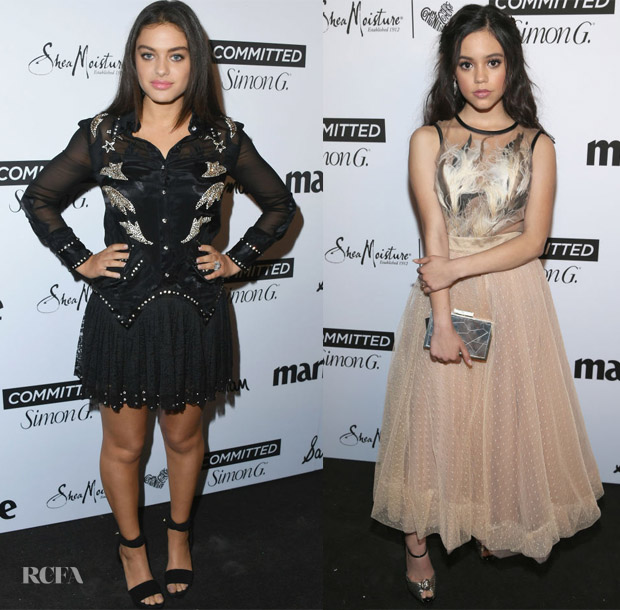 Odeya Rush: Dressed in Coach Spring 2018, the actress brought together whimsical and western elements for a unique finish. The black colour palette kept the finish chic. David Yurman jewelry and Nicholas Kirkwood sandals brought everything together.

Jenna Ortega: The young actress had a princess moment in Vitor Zerbinato. Between the beige dotted tulle and tufts of feathers on the bodice, it presented a more naturalistic take. The subdued tones were also beautiful with her complexion and dark hair. 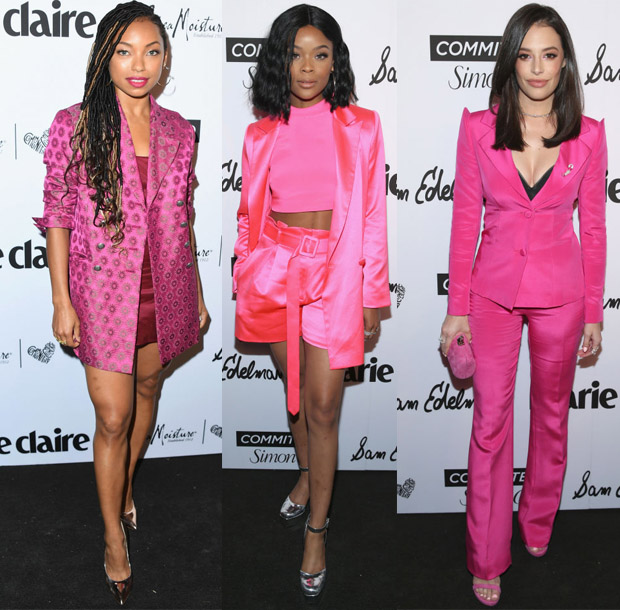 Logan Browning: Embracing colour, the actress wore Etro. The muted pink and red tones and printed jacket have a bohemian sentiment, but there’s something that feels slightly off about the proportions. A longer dress hemline would have felt more balanced.

Ajiona Alexus: Another one who embraced pink, she showed some skin in Victoria Hayes. It’s a fun interpretation of suiting and appropriate for someone of her 22 years. I appreciate that she didn’t default to wearing a pink shoe, but think the look would have been more successful with a subtler option. The metallic silver competes with the sheen of the coordinates.

Chloe Bridges: The actress proved pink was one of the hottest colours of the night in a Gretel Z ensemble. The problem is that the shocking colour enhances every single pull and crease. If the ensemble had a more relaxed fit, it would have made all the difference. 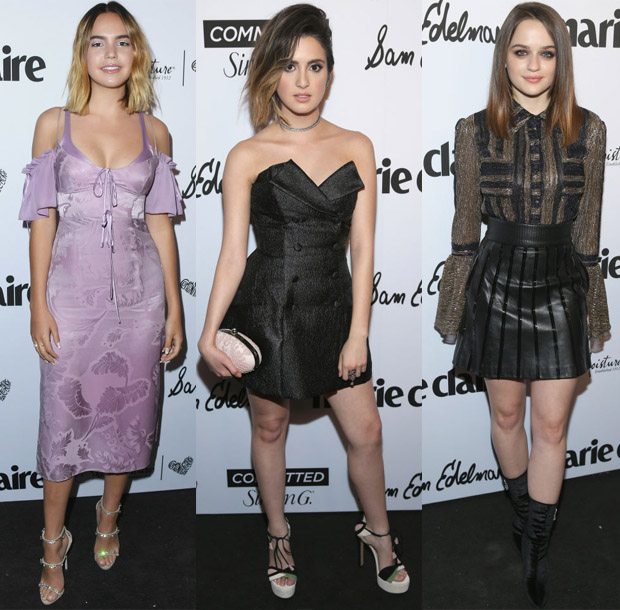 Bailee Madison: The ‘Good Witch’ actress celebrated spring in a pastel Cinq A Sept Fall 2017 dress. Cartier jewelry and Giuseppe Zanotti sandals played into the girlish whimsical mood. The off-the-shoulder neckline brought a flirty finish to the pastel style and prevented it from becoming saccharine.

Laura Marano: Riffing on a tuxedo theme, the actress-singer wore a John Paul Ataker dress. The details on the frock are intriguing but the shoes and light clutch draw the attention away. Simple styling would have allowed the piece to shine.

Joey King: The actress mixed hard and soft elements in Abodi. There is a lot detail on the blouse and skirt but the muted colour palette and short shapes prevent the pieces from overwhelming her. The boots add further edge, but an ankle boot would have been more successful.

Flaunt and Fendi celebrate the launch of...