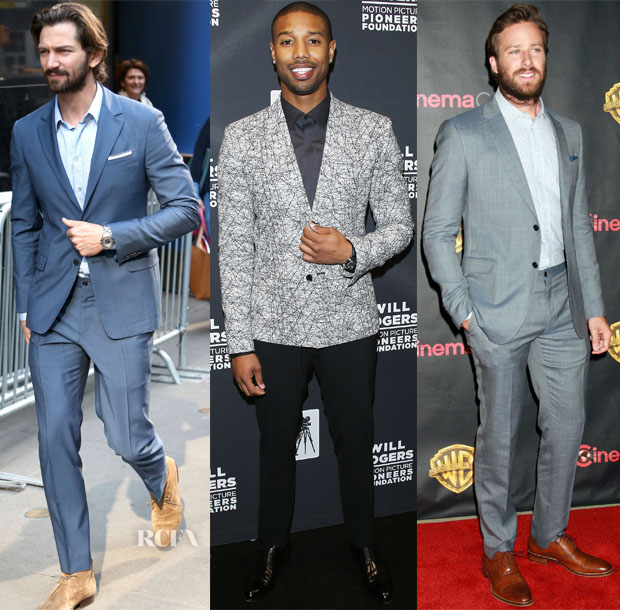 Before we close the week, here is a final look at the menswear options we have been blessed with courtesy of these fine gentlemen.

Michiel Huisman: ‘The Age of Adaline’ actor promoted his new movie on ‘Good Morning America’ the day after his co-star Blake Lively. Creating a splash in a much more muted manner, he donned a blue Salvatore Ferragamo look, which was utterly timeless and steeped in a suavity guaranteed to make me swoon. The look was complete with Lucchese Fico tan boots.

Michael B Jordan: The actor was looking as sharp as ever, going the extra mile by spicing up his look with a graphic print Public School blazer, while attending the 2015 CinemaCon ‘Pioneer of the Year’ dinner alongside Kate Mara. If this print is giving you a case of déjà vu, that’s because Hilary Duff owns a coat by the same designer with the same print.

Armie Hammer: Also going down the sleek Salvatore Ferragamo route for the CinemaCon 2015, the actor had an immaculately tailored moment working shades of grey with a hint of blue and brown for good measure. Shame about the beard though.