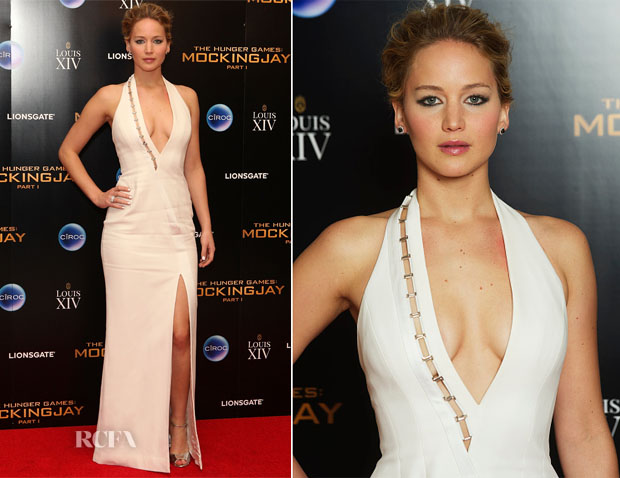 Changing out of the Dior frock into something a lot more risqué, the actress wore a white gown with a deep V neckline, an open back and metal detailing which was designed especially for her by Mugler’s creative director, David Koma.

It’s not often I get to use the words ‘Jennifer Lawrence’ and ‘sexy’ in the same sentence, but on this occasion it would be impossible not to with so much cleavage on display.

Creases aside, I love this more mature look. So far I have been impressed with the variety in Jennifer’s looks; perhaps it’s not going to be the Dior-fest I thought it was going to be after all.

Elevating the silver-toned detailing, she styled her look with matching open-toe sandals and David Webb jewels.

Many took great exception to her premiere makeup, but I don’t think much has changed in that department for the after-party so possibly the lighting was at fault for what many deemed to be a makeup malfunction.

Jennifer Lawrence Goes Eco-Friendly In A...

Jennifer Lawrence Was Pretty In Pink For...

Posted by Catherine Kallon on November 11, 2014 In: Jennifer Lawrence, Mugler