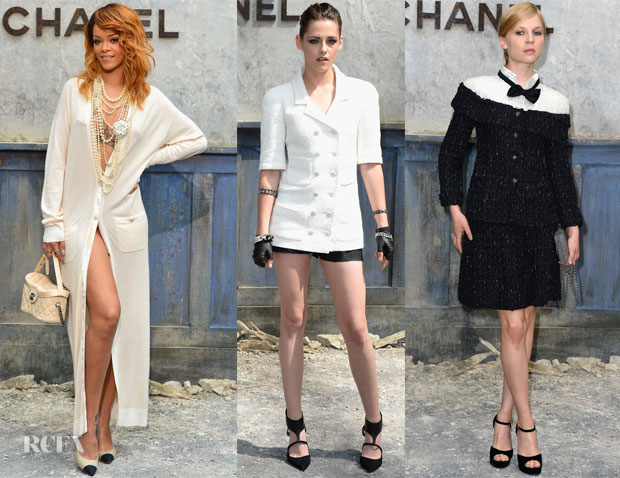 Chanel’s Fall 2013 Couture show took place at the Grand Palais in Paris, France this morning, with celebrity guests from all over the world taking seats in the front row.

Rihanna: The singer, who was out at dinner in Paris last night, wore a full-length Chanel cardigan from the Resort 2014 collection, making full use of the opening, which acted as a slit to show off her pins. As for the plunge, she decorated it with an array of Chanel pearl necklaces – just not enough to cover that tattoo on her chest. The rest of her accessories included a cream quilted vanity case and cream pumps with a black toecap, both of which are from the Chanel Resort 2014 collection. Even though this look could be considered just-rolled-out-of-bed, I have to say she makes it work for her.

Kristen Stewart: The ‘Twilight’ actress has sat front row at many shows for Balenciaga, but this was her first show during Couture week. No one should be surprised she opted for the shortest shorts Chanel have ever produced, teaming them with a white double-breasted jacket from Chanel’s Resort 2014 collection. Her menswear-inspired look was styled with black leather fingerless gloves, chain bracelets, Jean-Michel Cazabat Evangelina pumps, a slicked-back ponytail and smoky eyes. Love her or loathe her, she totally nailed this look. It’s everything I would expect from Kristen, with an extra dose of attitude.

Clemence Poesy: The French actress selected a Chanel Spring 2013 boucle skirt suit inspired by a classic tuxedo. While it’s an interesting look, it feels weighty. I would’ve loved Clemence to have selected something from the Resort 2014 collection. 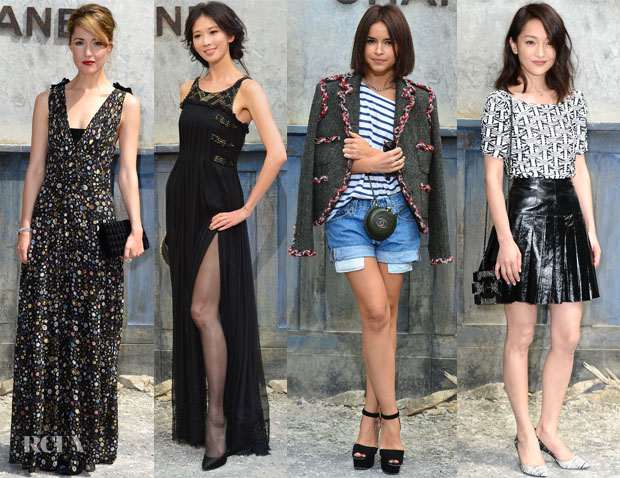 Rose Byrne: The Australian actress was oozing pure elegance in her Chanel button-print gown with black bow accents on the shoulders. This was my favourite look of this group. The styling is so effortless, unlike some of those above, with silver jewels, a quilted clutch and red lippie providing the finishing touches.

Lin Chi-ling: The Asian actress selected a black slit-to-the-thigh Chanel Pre-Fall 2013 pleated gown with an embellished yoke and buckle-like details on the side. Once again I am surprised that a Pre-Fall 2013 Chanel look is much improved on the red carpet; however, I have to question why one would wear a dress with such a dramatic slit then cover her legs with tights.

Miroslava Duma: The fashion editor was back to her best, throwing on a grey tweed Chanel Pre-Fall 2013 jacket with red-black-and-white trims over her casual Breton-stripe top and cuffed denim shorts. I love the effortless styling, which included platform sandals and her chic chain-accented Chanel hip flask.

Zhou Xun: The Asian beauty was considerably more low key than several of the other attendees, but her look should still be considered chic. She wore a black-and-white Chanel printed Resort 2014 top with a pleather pleated skirt, styling her look with a Chanel Lego clutch and black-and-white pumps.

Who gets your vote for best dressed at this event? 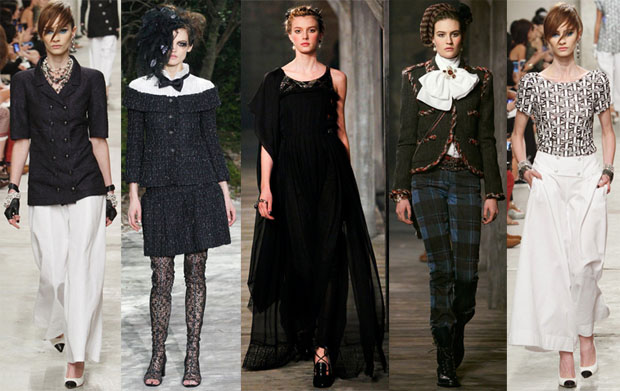