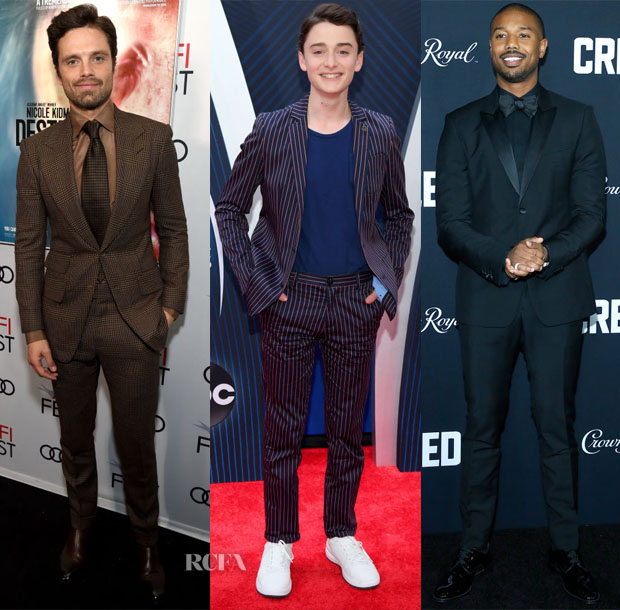 From premieres and screenings, to the CMA Awards and other showings, the men have been making handsome entrances over the past few days.

Sebastian Stan: At the ‘Destroyer’ screening on Tuesday (November 5) during AFI FEST 2018, Sebastian joined Nicole Kidman and wore this Tom Ford ‘Prince of Whales’ peak-lapel ‘Atticus’ suit styled with Chelsea boots. I think brown can sometimes look drab on the red carpet, but definitely not so here. The tonal colours and subtle patterning — not to mention the precise fit — worked wonders.

Noah Schnapp: How can you not smile at this ‘Stranger Things’ cutie in his Scotch & Soda striped suit and white sneakers at the 2018 CMA Awards on Wednesday (November 14).

Michael B. Jordan: At the ‘Creed II’ New York premiere on Wednesday (November 14), the actor wore all black in this Givenchy suit. But, it’s far from boring, as he always seems to bring so much charisma and dimension to his looks no matter what. 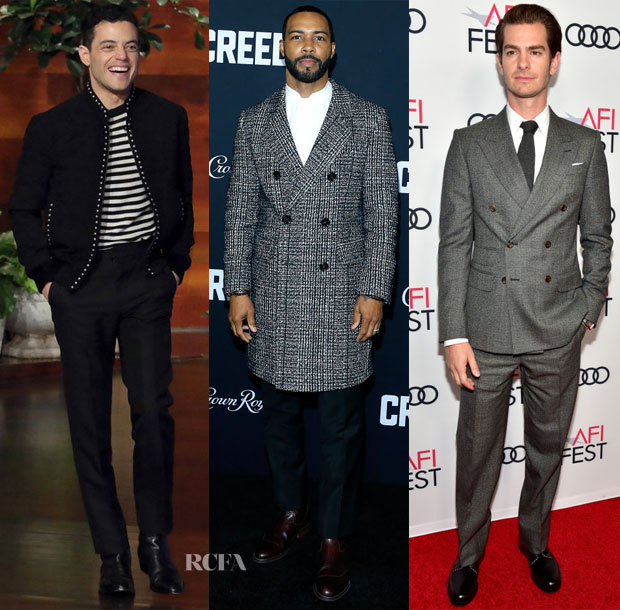 Rami Malek: The actor showed his stripes in this Saint Laurent by Anthony Vaccarello look while on ‘The Ellen DeGeneres Show.’ I love the sleek yet smart graphic elements of this look.

Andrew Garfield: Dapper as per usual, Andrew wore a double-breasted, gray Gucci Cruise 2019 suit for a special screening of ‘Under The Silver Lake’ on Monday (November 12) during AFI FEST 2018. 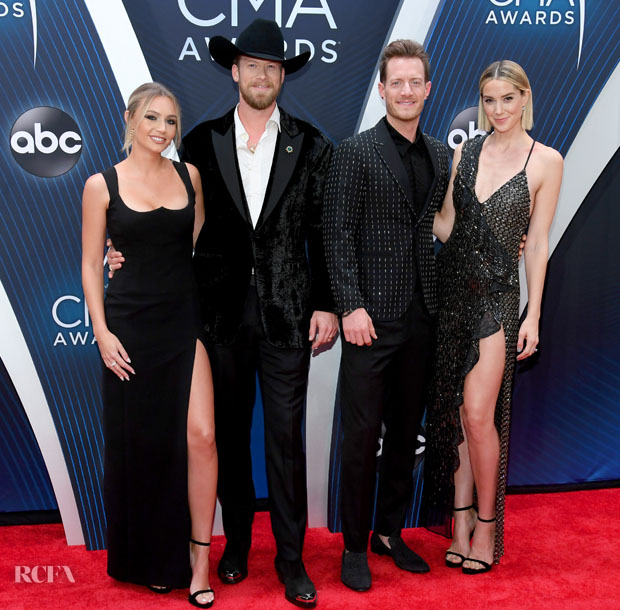 Brian Kelley: At the 2018 CMA Awards, musical duo Florida Georgia Line performed. But, before they took the stage, Brian — one member of the duo — was on the red carpet in a plush Versace suit that put a bit of country into the label’s glam vibe. The cowboy hat helped his cause there. His wife, Brittney Marie Kelley, was also dressed in a sleek Versace gown that made its most striking move with a sexy front slit.

Tyler Hubbard: Standing alongside Brian, Tyler, the other member of the Florida Georgia Line duo, was also dressed to impress in his glitzy Versace Spring 2018 look. His wife, Hayley Hubbard, played off the glitz in her sparkling, metallic-laced gown. I love how coordinated this whole quartet was. 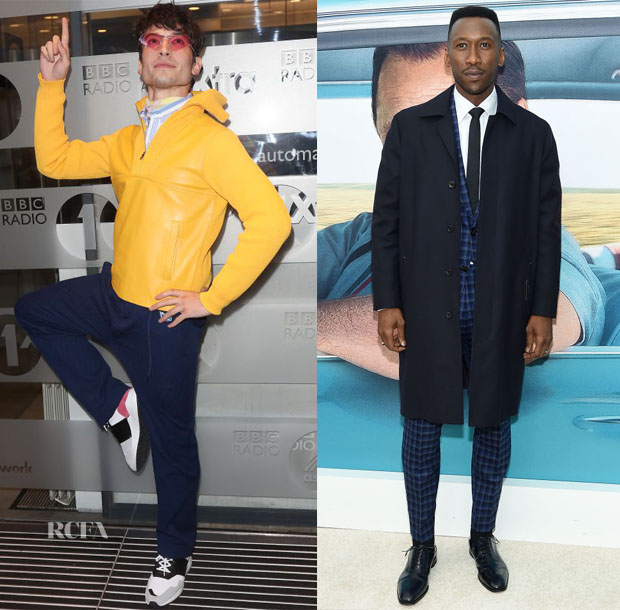 Ezra Miller: The actor never has any qualms about celebrating his unique, quirky style, so this Prada athleisure-inspired outfit that he wore on Monday (November 12) at BBC Radio Studios in London is par for the course. It’s pretty fantastic, too, between its sunny yellow disposition, casual-cool connotations, and those pink shades.

Mahershala Ali: We know the Etro label for its bold patterning, so this plaid suit from the brand was right on the mark. It looks like the actor was really channeling quite the skinny proportions with the super-slim-fit tailoring — albeit he covered up with an overcoat that added a sort of masculine allure and mystery to the look underneath. 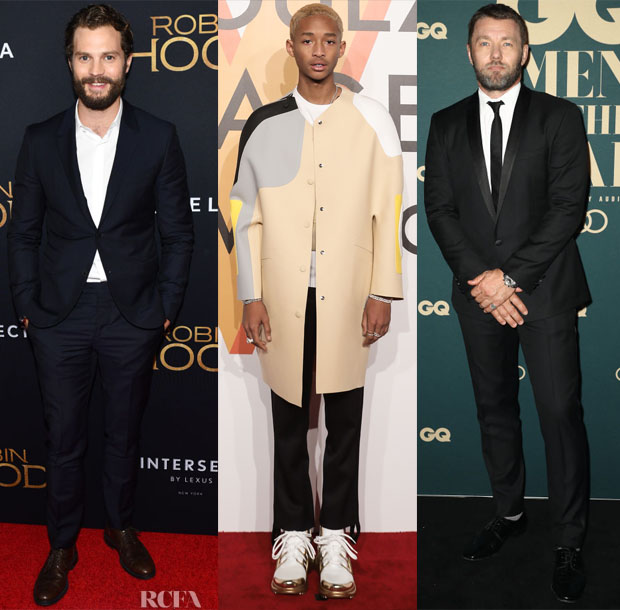 Jamie Dornan: At the ‘Robin Hood’ New York screening on Sunday (November 11), Jamie kept it pretty casual with this Valentino suit that could have used a bit more polish.

Jaden Smith: The young star donned a progressive Louis Vuitton graphic coat that looked like he was wearing the canvas of a modern painting with the platform sneakers adding a futuristic, urban edge. Of course, it was only natural he should be in LV as the event was to unveil the Louis Vuitton ‘Volez, Voguez, Voyagez’ Shanghai Exhibition on Thursday (November 15).

Joel Edgerton: Winning the coveted Man of the Year award during the ‘GQ Australia’ Men of The Year Awards ceremony on Wednesday (November 14), Joel kept it fairly straightforward in a Dolce & Gabbana black suit — obviously letting the award do the talking.

SAG-AFTRA Foundation Patron of the Artis...