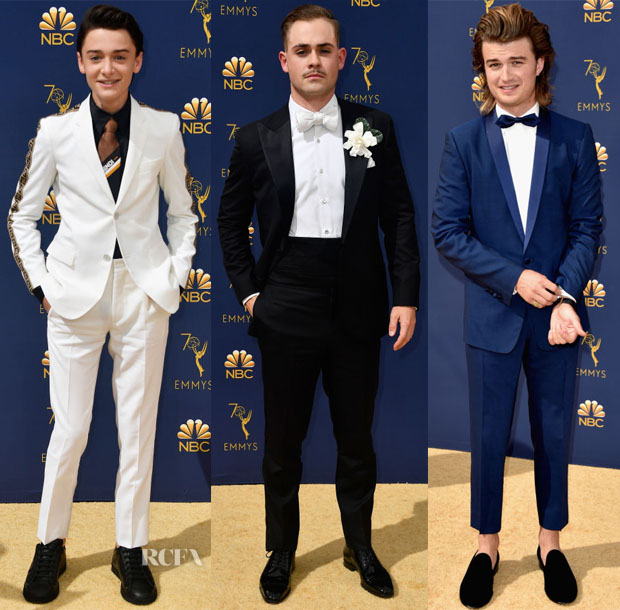 The men also had their style moment at the 2018 Emmy Awards on Monday (September 17) in LA, with many of the boys showing their older peers how it’s done.

Noah Schnapp: Can a look be simultaneously cute and cool? Yes, it can, with this Fendi Made to Measure Suit that had all the cool-kid, retro-forward charm you can possibly imagine for this ‘Stranger Things’ actor.

Dacre Montgomery: Something about this Brunello Cucinelli tux styled with Montblanc studs and Jimmy Choo ‘Penn’ shoes had a prom-meets-Victorian flavor. Must have been the corsage and the mustache.

Joe Keery: The ‘Stranger Things’ actor got in on the cropped trend with this Dolce & Gabbana blue suit paired with a Montblanc watch and cufflinks. Speaking of prom, his hair always reminds me of a throwback dance moment. 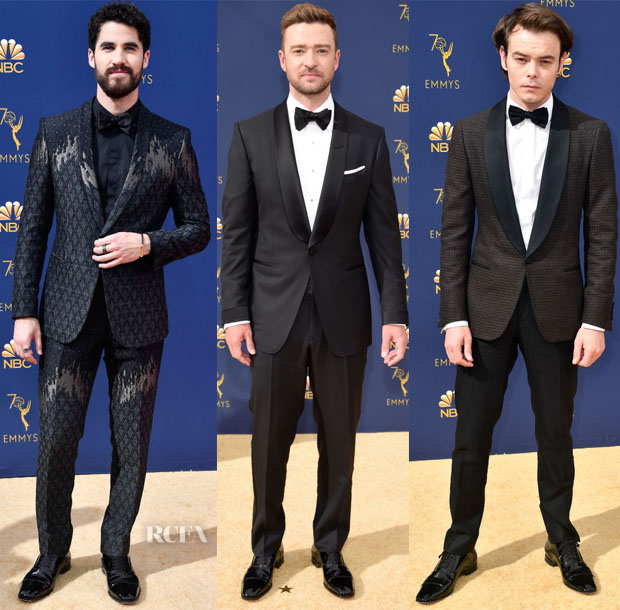 Charlie Heaton: The chocolate-brown jacket of this Isaia suit added a rich dimension to the ‘Stranger Things’ actor’s look. 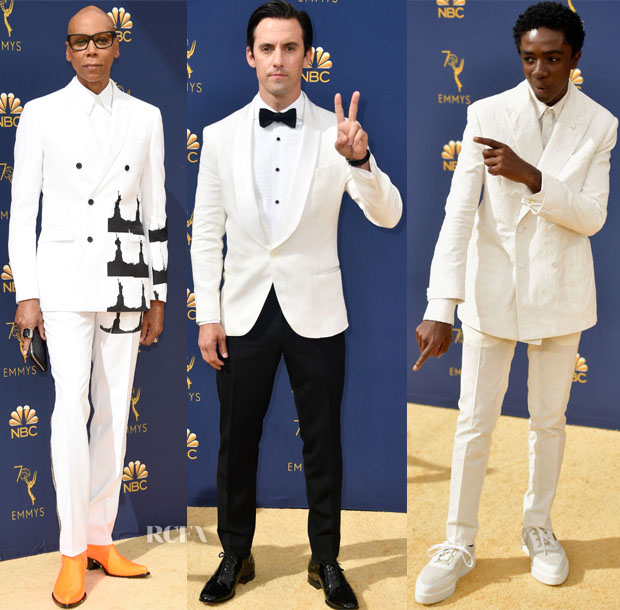 RuPaul: I love the artsy mood of this crisp-white Calvin Klein 205W39NYC suiting, cut through with black patterns that looked like a stylish Rorschach test. Naturally, the only way to top off the look would be golden-yellow shoes.

Milo Ventimiglia: The ‘This Is Us’ star was as handsome as ever in this precision-cut white Brunello Cucinelli tuxedo with Montblanc cufflinks.

Caleb McLaughlin: Also going for a white look, the ‘Stranger Things’ star played with proportions with the boxy jacket and skinny pants of this Louis Vuitton Spring 2019 suit. The sneakers upped its urban-cool street cred. 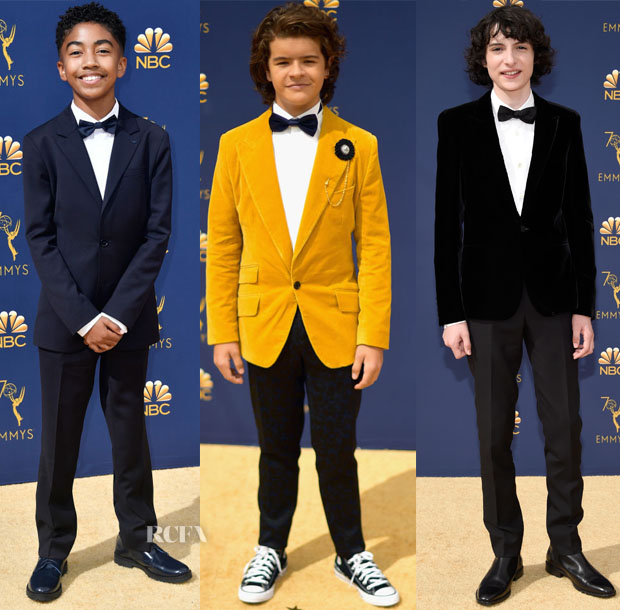 Miles Brown: The young actor showed the men how it’s done with this sweet-handsome suit.

Gaten Matarazzo: Like the rest of his ‘Stranger Things’ co-stars, Gaten raised the style bar in a Dolce & Gabbana ensemble. I love the juxtaposition of the luxe-formal velveteen jacket and corsage pin with the casual sneakers. 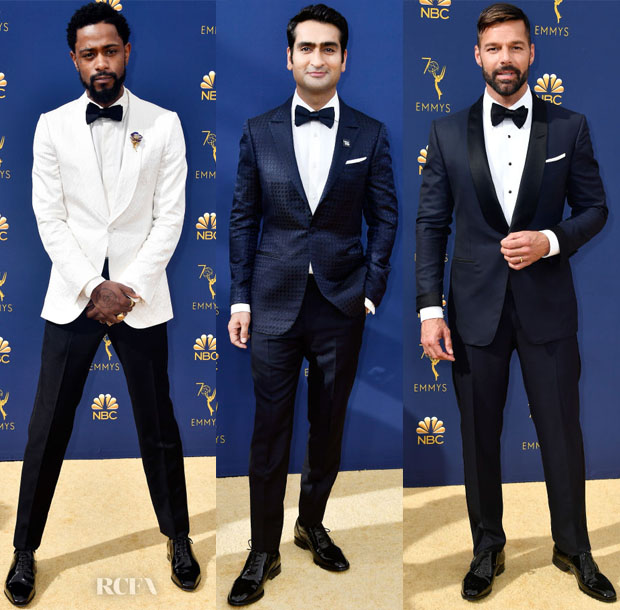 Lakeith Stanfield: Lakeith also jumped on the white dinner jacket train with Ermenegildo Zegna Couture tailoring that wasn’t quite as crisp-fitting as I would have preferred. A David Yurman ring finished the look.

Kumail Nanjiani: The embossed sheen of this Ermenegildo Zegna Couture suit added some dimension to the look that was styled with Tods shoes and David Yurman cufflinks.

Ricky Martin: This Tom Ford tux was just as suave and smooth as the singer himself. 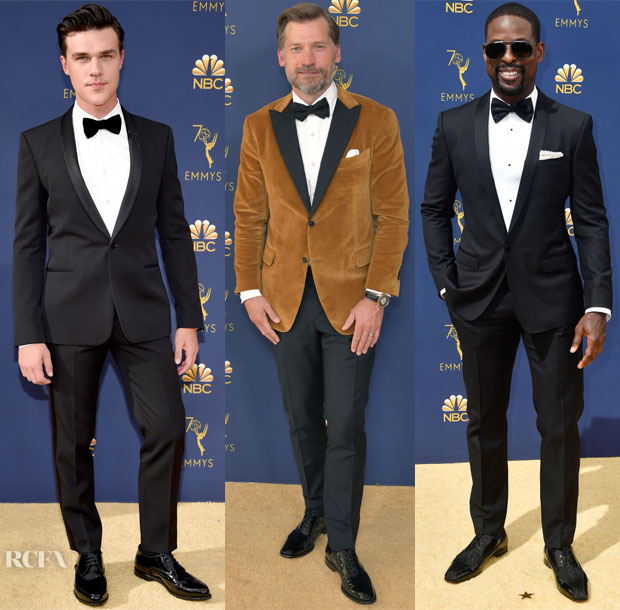 Finn Wittrock: Finn relied on a traditional Saint Laurent tux for the night.

Nikolaj Coster-Waldau: While I appreciate this differentiation on standard eveningwear, the tan dinner jacket of this Isaia suit translated as a rather peculiar hue on the red carpet. He accessorized with Tods shoes, a Breitling watch, and Montblanc cufflinks.

Sterling K. Brown: The ‘This Is Us’ actor struck a chill pose in his Carrera shades to complete this Dolce & Gabbana tux and Chopard watch and cufflinks. 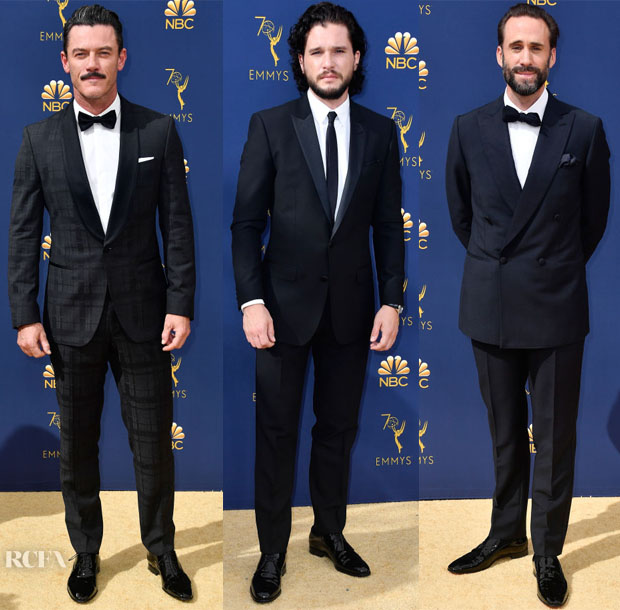 Luke Evans: With an interesting take on tonal black plaid, Luke’s suit was completed with a David Yurman watch.

Kit Harrington: The tie was skinny, but the rest of the Dolce & Gabbana suit was pretty standard. A Montblanc watch and cufflinks finished it off.

Joseph Fiennes: The loose tailoring of this double-breasted Brioni Bespoke design left a little to be desired. Christian Louboutin shoes and a Chopard watch and cufflinks completed the suit.