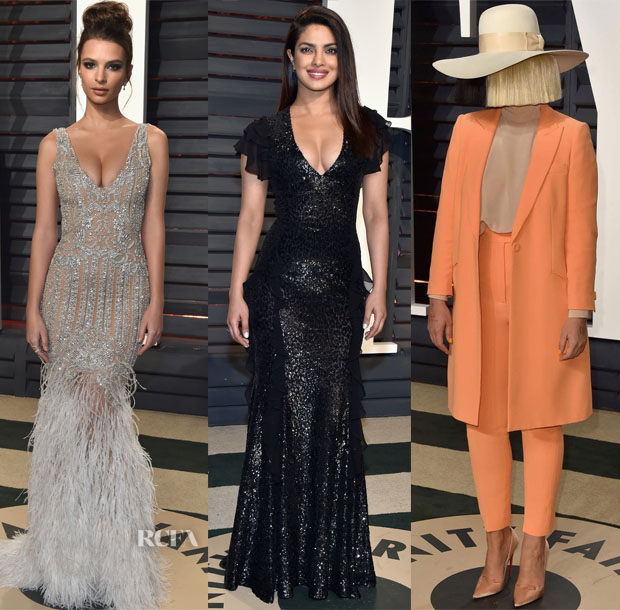 The 2017 Oscars party circuit was in full tilt with so many other style darlings in attendance at both the 2017 Vanity Fair Oscar Party and Elton John’s AIDS Foundation’s Academy Awards Viewing Party on Sunday (February 26). Here, a roundup of additional looks from the star-studded evening.

Priyanka Chopra: Speaking of glitter, Priyanka’s black Michael Kors Collection gown would have just been a standard black dress had it not been for the blitz of sequins.

Sia: I had to do a double-take with the singer’s custom Giorgio Armani cantaloupe-hued suit, as the nude-coloured lining provided a strange effect that made her hat-topped head almost appear to be floating. 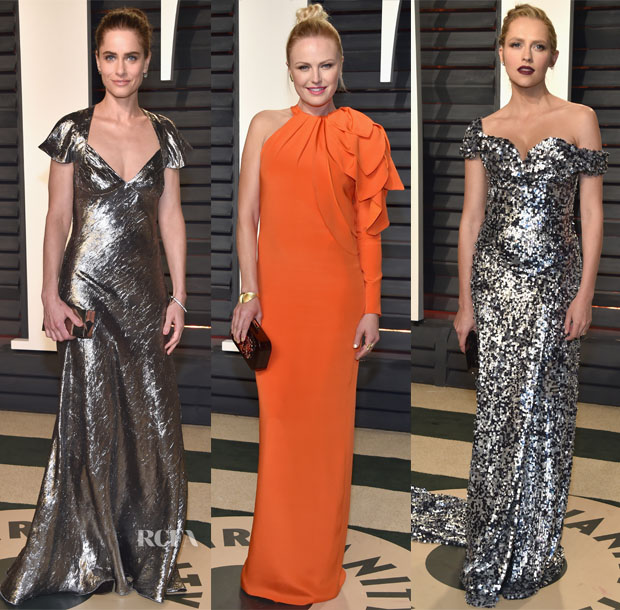 Amanda Peet: Liquid metal was the M.O. of this Michael Kors Collection gown yet despite the shiny effect, it still seemed like something was missing. Perhaps a statement earring or a bold lip.

Malin Akerman: The juicy tangerine hue of this Kris Goyri gown was all it needed to stand out. The sculptural shoulder detail only made it more impactful. Stuart Weitzman shoes, Graziela jewels, and a Devi Kroell clutch completed the look.

Teresa Palmer: Despite the heavy paillette embellishment, the signature corset and drape silhouette of a Vivienne Westwood Couture design was still very much at work here. She made it even more dramatic with an oxblood lip, finishing the look with a Lee Savage clutch. 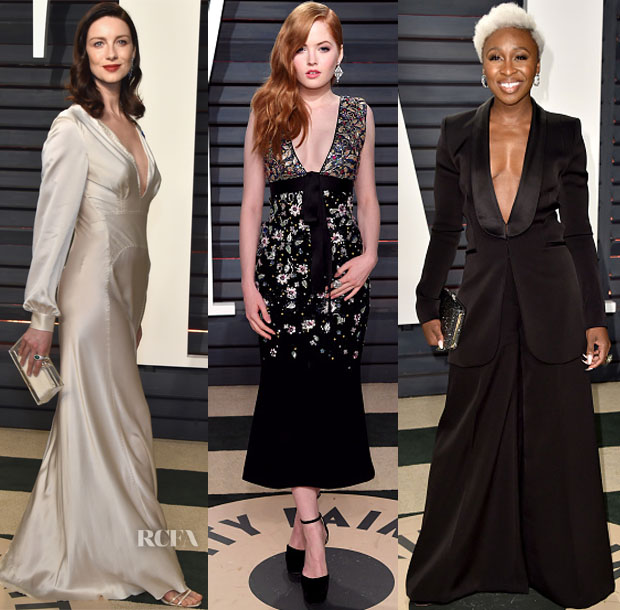 Caitriona Balfe: Bringing the boudoir to the red carpet in an Alberta Ferretti Fall 2016 creamy, silk dressing gown, she dressed up the look with Jimmy Choo ‘Tizzy’ sandals and Hearts on Fire diamond earrings—plus a crimson lip.

Ellie Bamber: Precious and prim, her Chanel Pre-Fall 2017 dress that bloomed with floral embroidery was finished with Chanel Fine Jewelry. I love the fresh teacup length of this charming look and the way it complemented her radiant auburn waves.

Cynthia Erivo: The exact opposite of the array of multi-hued dimensionality she offered at the 2017 Oscars red carpet, the actress went for a far less colourful Prabal Gurung Spring 2017 dark ensemble with Sophia Webster shoes. 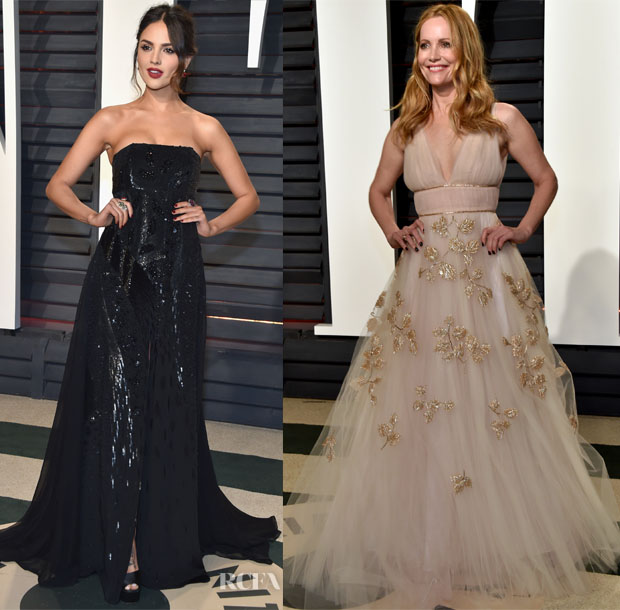 Eiza González: She complemented her Prabal Gurung Fall 2016 gown with tonal black embellishment with Giuseppe Zanotti heels and berry-red nails and lip lest it become too one-note.

Leslie Mann: The actress kept up her voluminous standard with this Carolina Herrera gown, but the embellished froth seemed a bit too young and the colour washed her out. 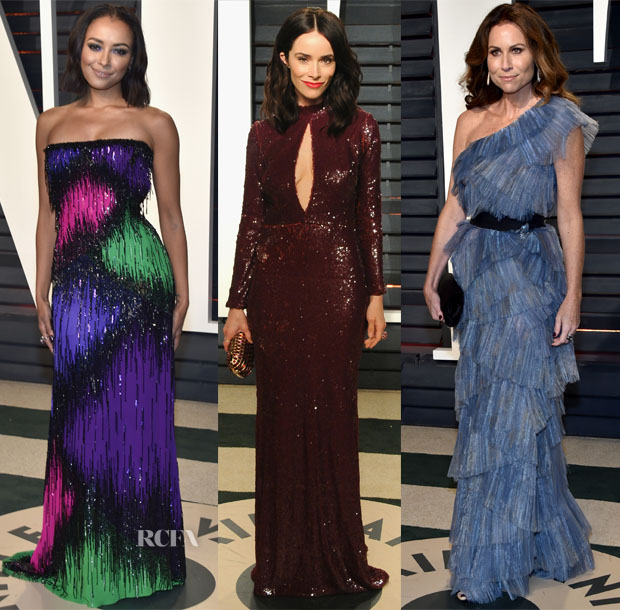 Kat Graham: There was no chance of a wash-out with Kat’s vivid Renato Balestra Couture dress, the vibrancy of which simply made me happy. Only minimal Swarovski jewels were needed as the gown itself was such a statement piece.

Abigail Spencer: Demure on the surface, save for the slightly suggestive keyhole cutout and the open back, this Thai Nguyen Atelier Fall 2017 gown oozed of subtle glamour. She styled it with a Jimmy Choo ‘Claire’ clutch and orange-red lip that wouldn’t have been my first choice.

Minnie Driver: The frill of ruffled layers took hold in this feminine Vionnet gown paired with a Tyler Ellis ‘Aimee’ black clutch to echo the belt. 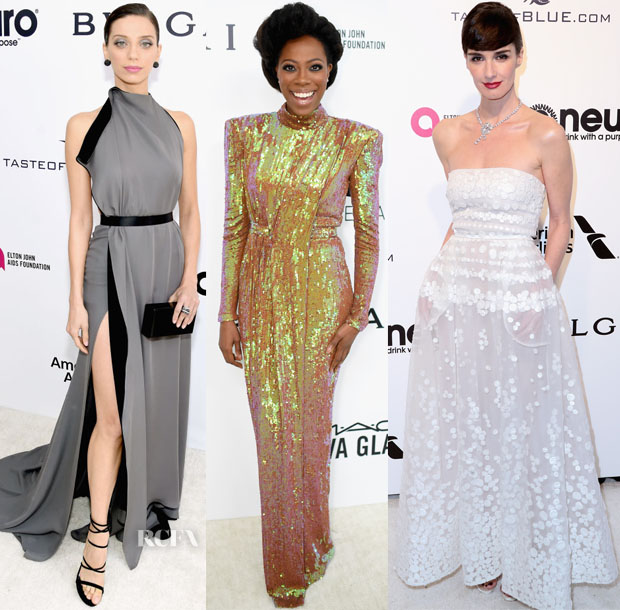 Angela Sarafyan: In a sea of shine, Angela opted for more matte appeal with this August Getty Atelier backless gown with that intriguingly draped around her frame. Doves by Doron Paloma earrings and ring brought a hint of shine to the statuesque look.

Yvonne Orji: You could tell that Yvonne was embracing every bit of her walking hologram gown by Valdrin Sahiti that sparkled in scintillating sequins. Cesare Paciotti shoes completed the look that needed nothing else in the way of accessories.

Paz Vega: While the pockets are no doubt a nice feature, seeing her hands through this sheer white Elie Saab Resort 2017 confection is a bit odd. Christian Louboutin ‘Benedetta’ sandals completed the look. 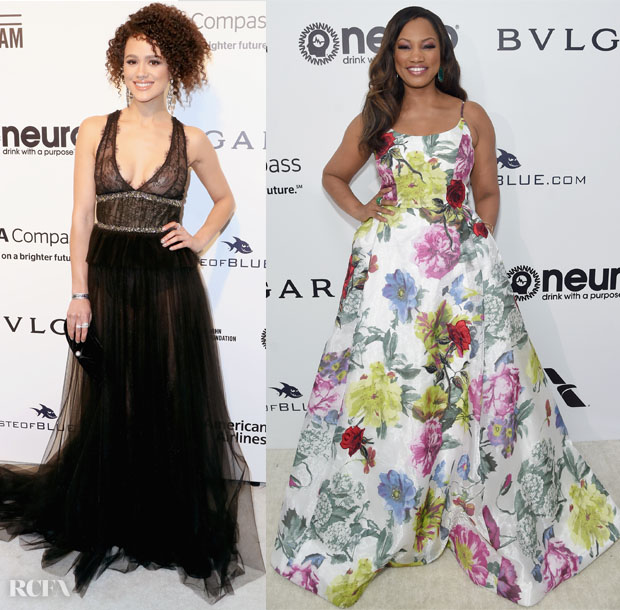 Garcelle Beauvais: If a flower bouquet became a ball gown, this Jovani creation would be how it looked. 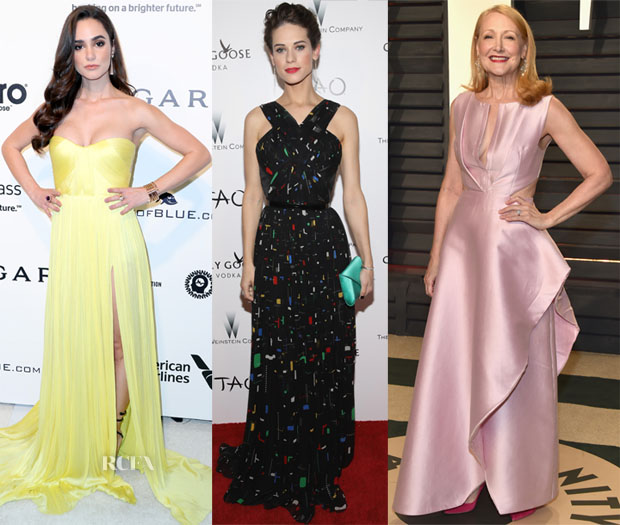 Alicia Sanz: I loved the lemony hue and the liquid silk effect of this Maria Lucia Hohan gown, but it puddled too prominently around her feet. She accessorized with jewels including a Pasquale Bruni earrings, bracelet and ring, and a Le Vian ring.

Lyndsy Fonseca: Geometric shapes flitted across her black Equihua dress. I know she was pulling a colour from the print, but this bright seafoam-green Tyler Ellis ‘Lee’ clutch wouldn’t have been my go-to shade.

Patricia Clarkson: This mauve-pink Son Jung Wan gown simply translated as lacklustre so I was far more interested in the pop of magenta shoes that were peeking out from the hem.