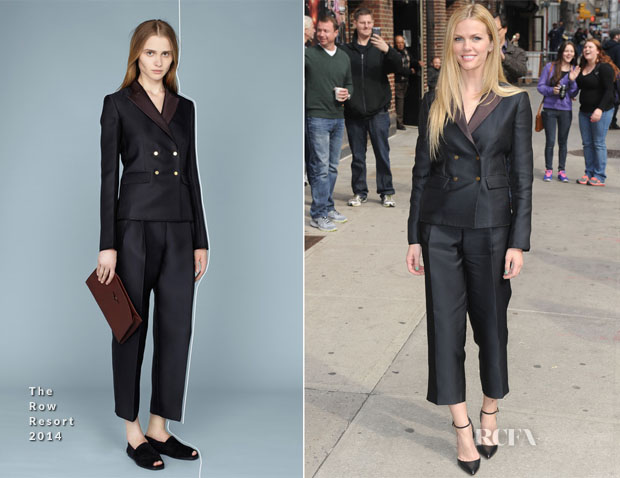 Brooklyn Decker was spotted outside the Ed Sullivan Theater prior to her appearance on the ‘Late Show with David Letterman’ on Tuesday (April 8) in New York City following her earlier visit to the SiriusXM Studios.

Much like Kristen Wiig, Brooklyn opted for a look very much out of her comfort zone, and as with the aforementioned, I really dislike the look.

I’m not sure if it’s the brown lapels on her The Row Resort 2014 double-breasted blazer, the awkward cropped pants or a combo of the two (probably the latter), but this suit is not the right style fit for Brooklyn.

Had the trousers been tapered I may have given this mannish outing a round of applause, but as presented you will only hear crickets.

Am I being too harsh? Do you like this look?

Posted by Catherine Kallon on April 9, 2014 In: Brooklyn Decker, Runway To Red Carpet, The Row