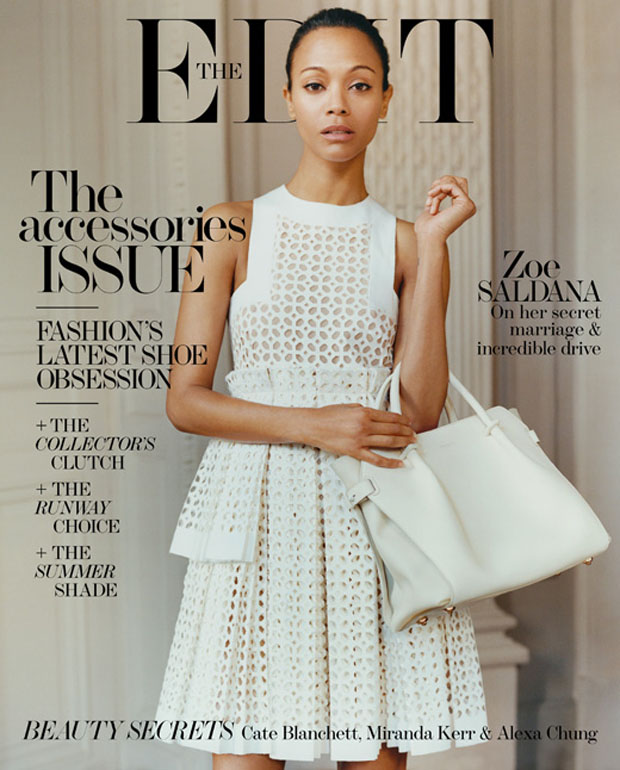 THE EDIT features actress Zoe Saldana on the cover in this season’s beautiful pieces featuring an Alexander McQueen dress and bag by Nina Ricci.

In an exclusive interview, Craig McLean talks to Saldana about life beyond her dazzling acting career and her personal life, which she keeps far from public view.

Currently filming in Paris where THE EDIT meets her, Saldana is working on a two-part mini-series remake of classic horror ‘Rosemary’s Baby’ for her new production company, which she runs with her two sisters.

As a businesswoman as well as an actress, it’s clear her new role has kept her busy: “I’ve been an active person my whole life. The past year has been the only time in my life that I haven’t been to the gym.”

Embracing her role as a wife now too, last summer Saldana briefly escaped the five-month ‘Guardians of the Galaxy’ shoot (out this summer) in Surrey, England to marry her Italian husband, artist Marco Perego nearby: “I’m not a private person, but I am discreet. So it felt right.”

Diagnosed with Attention Deficit Disorder when she was a child, her condition explains her drive, myriad expressions and her concurrent projects. Saldana isn’t fazed by it though: “I don’t care what people think”, she says cheerfully. “I wish I did, maybe I would be at a different place in my life, but I don’t care. I can’t fake it. I follow my heart, my friends’ advice, a song, a poem.”

On whether her condition affects her acting career: “I have ADD, I am a Gemini and I get bored quickly. So my next challenge is to direct, because I am getting tired of the frustration of being just a particle in the whole telling of the story. I want to be more. I want to be in there from its conception.”

On her exciting red carpet style: “I don’t care what people think. If I did, I’d be at a different place in life, but I don’t. I can’t fake it. I follow my heart or my friend’s advice. Petra Flannery, my stylist, is a paramount when it comes to my fashion radar. She pushes me to evolve.”

On her new diet: “I’ve been an active person my whole life. The past year has been the only time in my life that I haven’t been to the gym. I’ve been lazy instead of training for something and pushing myself. [I don’t go to the gym] because I am trying to be skinny. I just like to know how much endurance I have. But this past year I’ve let myself go. I’ve been eating a lot of Chinese, pasta, rice, beans…”

Dress by Valentino; shoes by Rochas; bag by Anya Hindmarch

Dress by Thakoon; ring Zoe’s own

Top by Calvin Klein Collection; skirt by Erdem; sandals by Sergio Rossi; bag by The Row

Credit: Matteo Montanari for THE EDIT

Posted by Catherine Kallon on March 14, 2014 In: Zoe Saldana