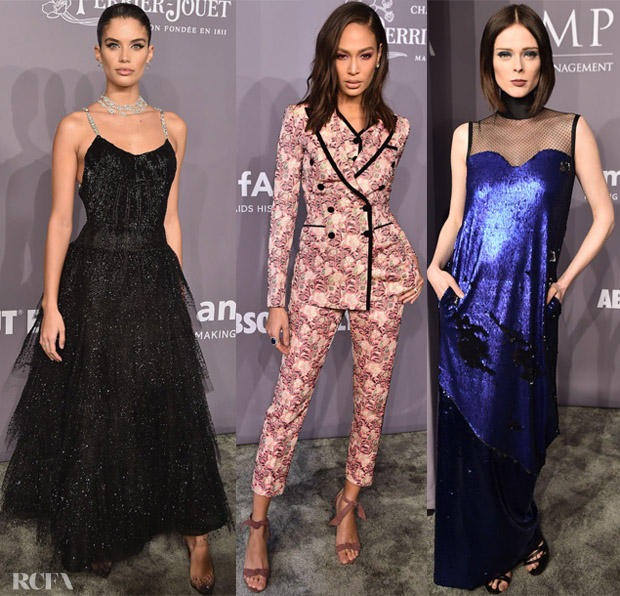 The glamour was at a high at the 2018 amfAR Gala New York on Wednesday (February 7) where lovely ladies joined Lucy Hale, Olivia Culpo and Halsey.

Sara Sampaio: The Portuguese beauty had a princess moment in Armani Privé Spring 2006. The glistening tulle was accented with the embellished straps. You’ll be forgiven for thinking that the Chopard jewels were part of the original look as they coordinate so perfectly.

Joan Smalls: Forgoing the glitzy gown, the model donned a Dolce & Gabbana suit with John Hardy jewels. The stark black piping against the muted brocade fabric creates a dynamic display of contrasts, but I wish she saved this ensemble for another event. Against the high octane dresses, it feels a touch out of place.

Coco Rocha: Projecting slinky glamour, the Canadian model showcased the pockets on her Greta Constantine Pre-Fall 2018 dress. There are details aplenty on the gown so I was thankful she lost the coordinating gloves from the lookbook version. 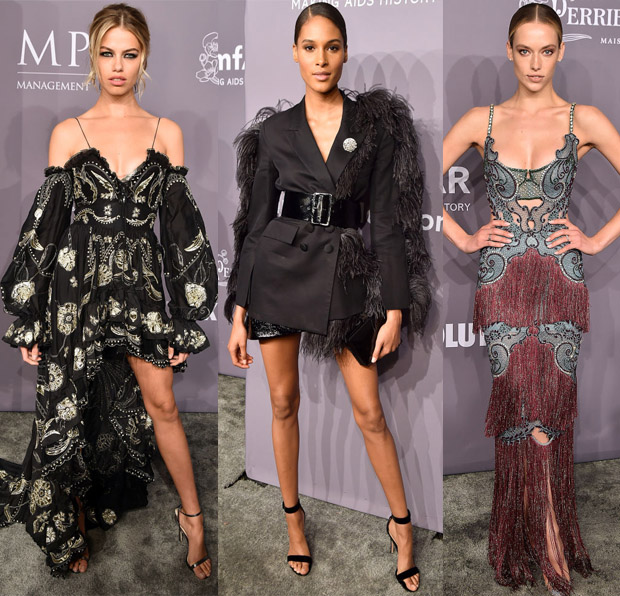 Hailey Clauson: Poppy Delevingne‘s Dundas gown missed the mark and I’m afraid the model’s Dundas Resort 2018 dress didn’t quite work for me either given the formality of the event. The dark romance of the fabric married with the bohemian feel is interesting, but methinks it’s best suited for a more casual affair or a tropical destination.

Cindy Bruna: The French model showed off her mile-long pins in a 16Arlington look. There is a lot going on up top so she wisely kept her accessories understated with Gianvito Rossi shoes, a Judith Leiber clutch and sleek hair.

Hannah Ferguson: Another lovely lady displaying bold details, the model wore a Raisa & Vanessa Spring 2018 dress with Louboutin shoes and Jack Vartanian jewels. I’m in awe of the cut out the gown. Even with the fringe, it still fits like a glove. The illusion bodice adds a whimsical quality as does the unexpected mix of gray and deep red. 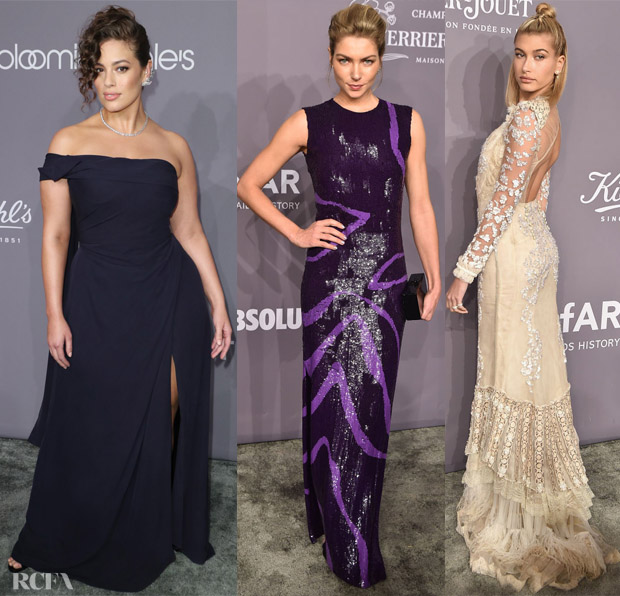 Ashley Graham: The supermodel normally has such presence on this red carpet, but I felt a bit underwhelmed with her Vivienne Westwood gown. The accessories were neither here nor there, and I’m sure there are many who will not be able to see beyond the hair. Jimmy Choo ‘Pearl’ sandals completed her look.

Jessica Hart: There was no shortage of shine at the event, but the Australian model offered a unique take on it with her Jeffrey Dodd Fall 2017 gown. The slashes of light purple against the darker base create such movement in the sleek column style.

Hailey Baldwin: Romance was at a high in the American model’s Roberto Cavalli Fall 2017 gown. As someone who normally goes for sexy, trendy pieces this was a refreshing change for her as well as the designer. Of course, she was sure to showcase the sultry open back. 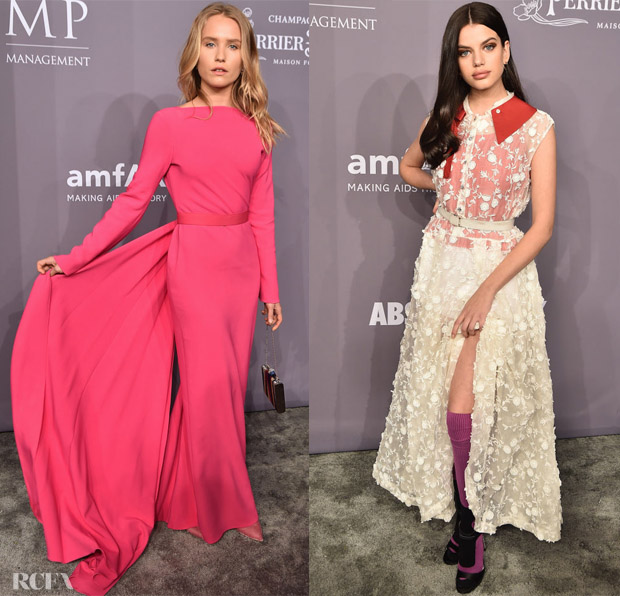 Sailor Brinkley Cook: This joyful pink Brandon Maxwell Spring 2018 gown was previously worn by Jane Fonda. Normally, one would not expect a 19-year-old and an 80-year-old to be in the same look, but it’s a testament to the designer that it suits them both beautifully. The striking shade prevents the long-sleeved style from reading too maturely on the model.

Sonia Ben Ammar: Opting for whimsy rather than unabashed sparkle, the model was clad in a Miu Miu Spring 2018 outfit. I can see people taking issue with both the footwear and sheer skirt. The contrasting purple socks against the terracotta collar adds a playful note, but I would have liked to see her make the dress her own with accessories. 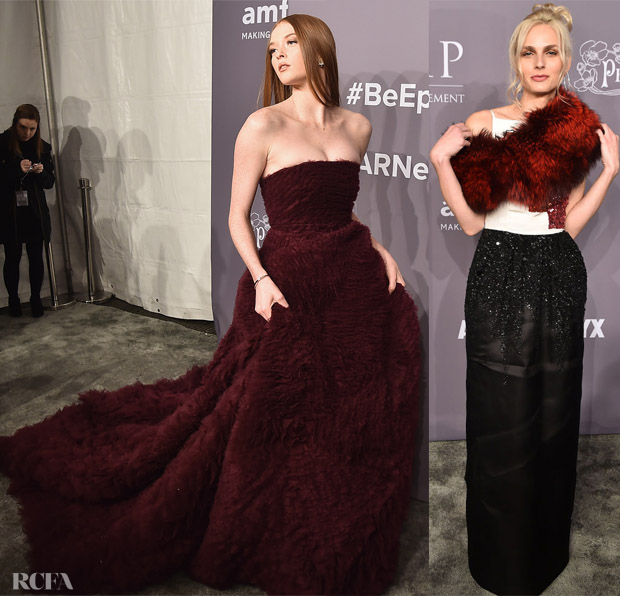 Larsen Thompson: The actress graced the red carpet in an Ong Oaj Pairam Fall 2017 gown. The oxblood colour against her pale complexion and ginger hair was captivating, but the effect is lost slightly seeing how she had to carry the frock to move. Had it been taken up, it would have had a spell-binding effect, seeing all of the layers float across the ground.

Andreja Pejic: The model worked every part of her Oscar de la Renta Spring 2018 ensemble, posing to showcase her stole. It’s a shame about the creasing on the skirt and the fact the furry accessory conceals the magnificent detailing on the bodice. I see why she added it to tie in the red, but most of the embellishment has been concealed, rendering it ineffective. 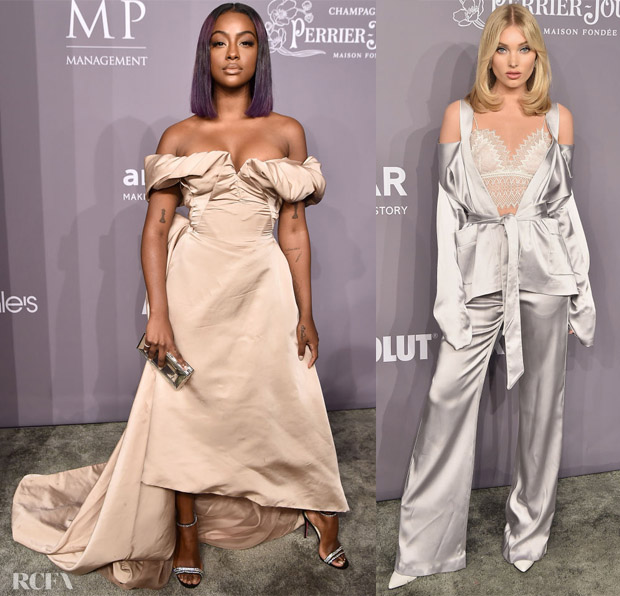 Justine Skye: The singer’s Vivienne Westwood Couture gown demonstrated the mastery of the designer’s corset-making skills. The puff sleeves and draped hem recall retro romance, but her sharp purple bob adds a distinct modernity. This was a different silhouette for her, and I enjoyed the change of pace.

Elsa Hosk: The Swedish beauty went for a clear pyjama dressing look with her Jonathan Simkhai Pre-Fall 2018 separates. She wore the ensemble straight from the lookbook, but I’m afraid the lace top overcooks it. Rather than coming off as alluringly louche, it reads as a bit too much like actual lingerie. 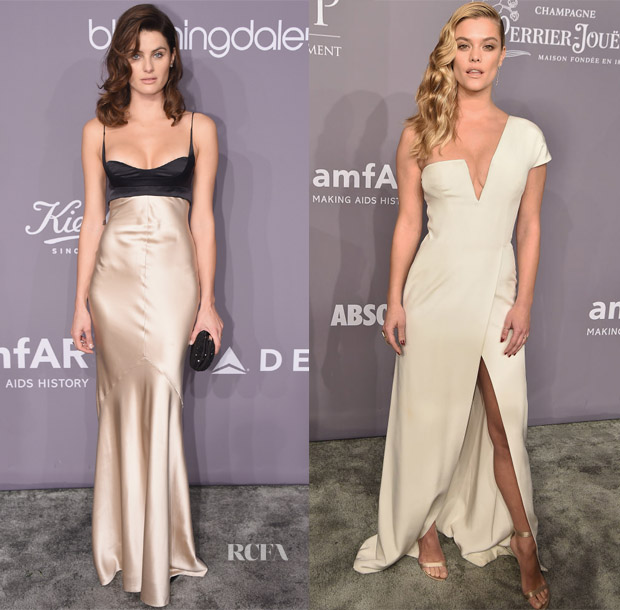 Isabeli Fontana: The model’s Narciso Rodriguez black and champagne silk charmeuse gown is gorgeous, but something tells me that the bodice is a tad too snug. Giuseppe Zanotti clutch completed her look.

Nina Agdal: You weren’t fans of her Balmain look at the Solid and Striped launch event, but I have a feeling you will find her KaufmanFranco one-shoulder gown much more appealing.