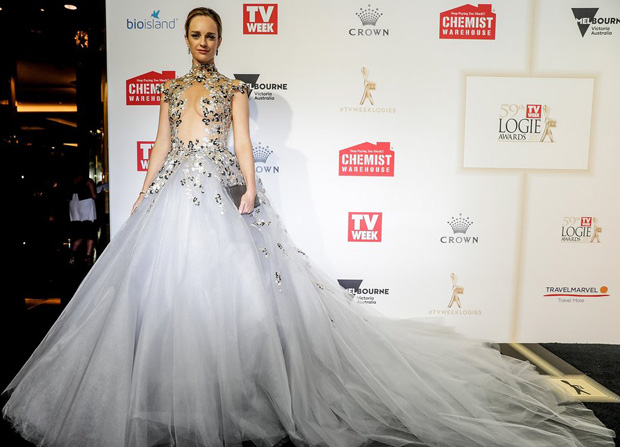 The 59th annual Logie Awards, celebrating Australian television, were held on Sunday (April 23) in Melbourne, Australia, with a number of stars in attendance.

Penny McNamee: Go big or go home was the mantra of this sweeping Alin Le Kal confection. With its floral-embroidered illusion bodice and mountains of tulle, this was a princess moment taken to another level entirely. 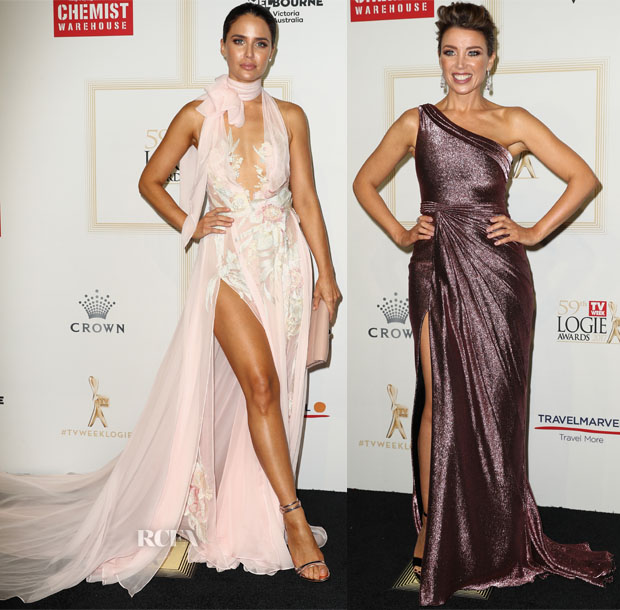 Jodie Anasta: Despite its innocent, baby-pink hue, this J’Aton Couture gown was plenty provocative. But, the look was ultimately compromised by its dated floral design and Jodie’s overly bronzed look.

Dannii Minogue: The ruched, asymmetrical silhouette of this Cappellazzo Couture gown is nothing we haven’t seen before. However, the updo and shimmering metallic fabric did put it down a more pageant-like path. 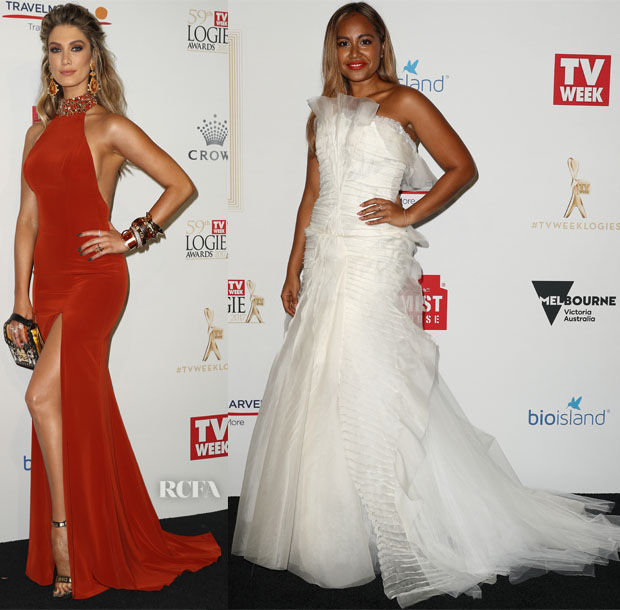 Delta Goodrem: Her red body-contouring Steven Khalil gown was sizzling hot. However, it would have been more sleekly finished without the mound of accessories—most notably the pile of rings and bangles.

Jessica Mauboy: I’m afraid all I saw was a wedding gown that should be in the ‘no’ pile with this white Toni Maticevski tulle dress. 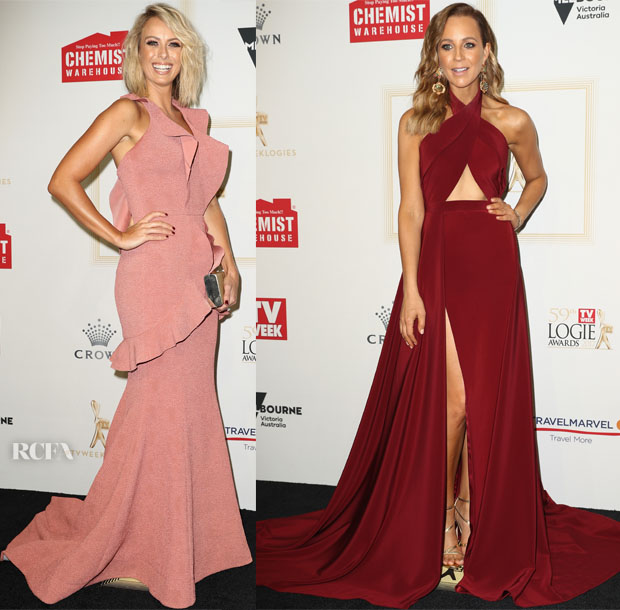 Sylvia Jeffreys: This mauve-pink Rebecca Vallance ruffle gown was like a breath of fresh air at the event for its simplicity of styling and clean, tailored lines. 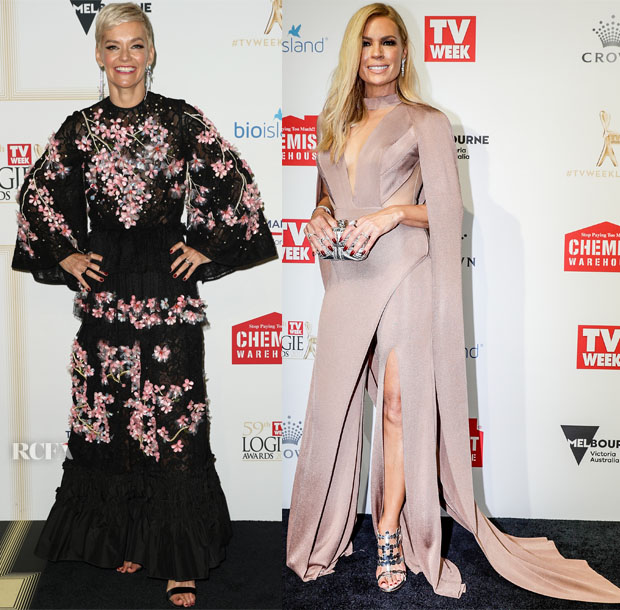 Jessica Rowe: Sensory overload came back in full force with this Romance Was Born design, adorned in dimensional flowers. Chop off the overbearing sleeves and nix the long earrings, and we may have had a look.

Sonia Kruge: While I always love a good cape, something about this Balmain spliced gown fell flat and rather dated. The styling was partly to blame, as the silver accessories were too flashy and a sleeker ’do would have been preferred. 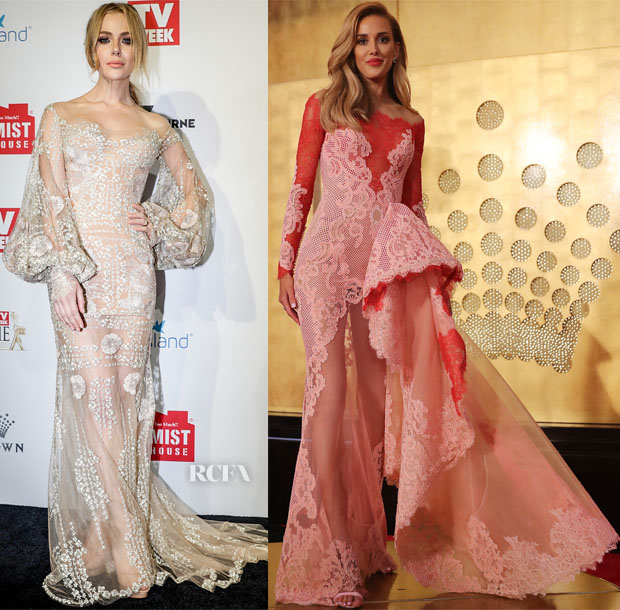 Jessica Marais: I wanted to like this J’Aton Couture gown for its enchanted embroidery and medieval inspiration. But the visible illusion neckline was distracting, as were the bell sleeves that were just a bit too big to be taken seriously.

Rebecca Judd: There was a beautiful sense of sculptural artistry in this J’Aton Couture lace design. 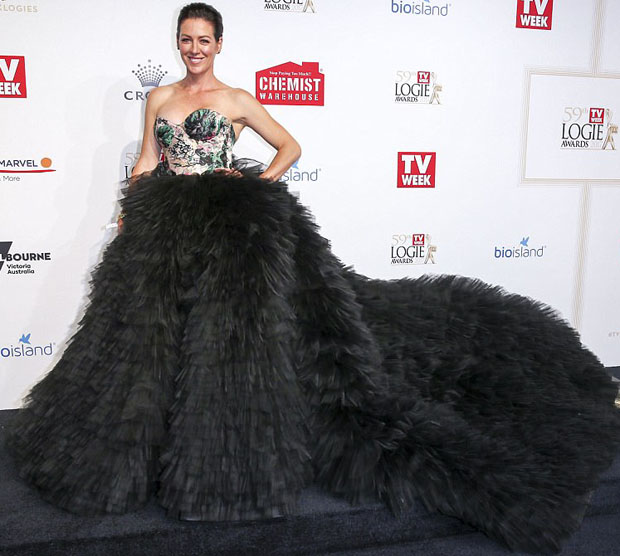 Gorgi Coghlan: Penny wasn’t the only one to sweep away the red carpet with the bold swish of an impossibly voluminous, flurry of a skirt. All eyes were on Gorgi, one of the night’s presenters, with this Con Ilio confection. 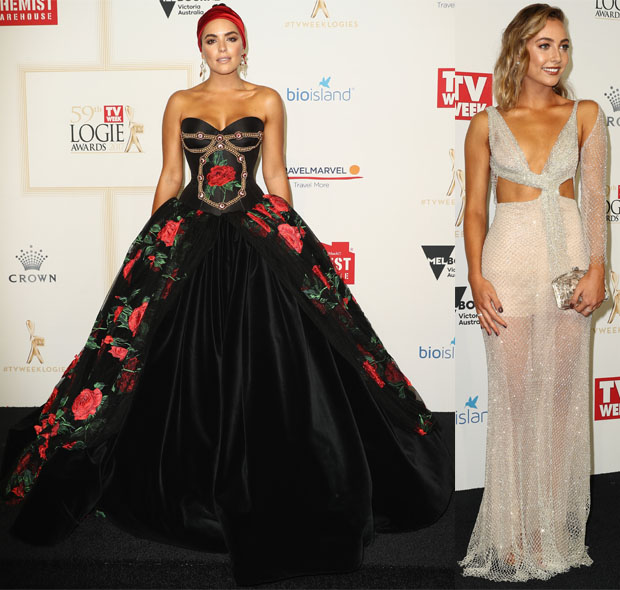 Olympia Valance: Also in a Con Ilio design, Olympia’s corset ball gown was a bit less imposing. However, there was still plenty of attention-grabbing flair to the rose-embroidered dress styled with a red, satin headband and chandelier earrings.