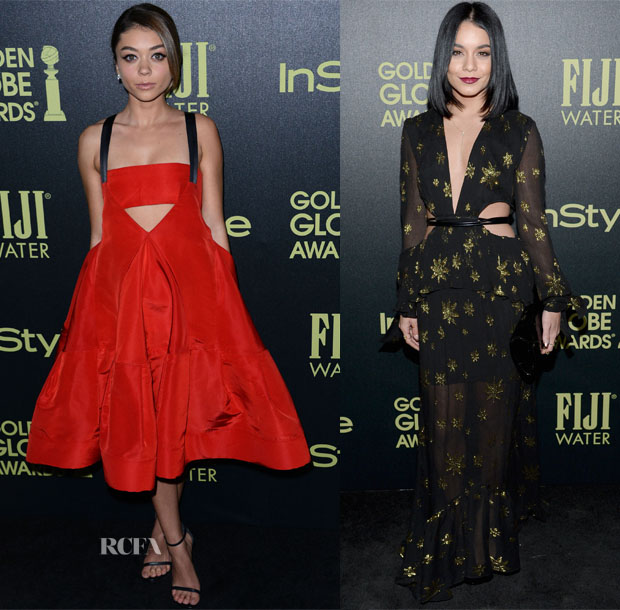 The starlets came out for the Hollywood Foreign Press Association and InStyle’s celebration of the 2016 Golden Globe award season at Ysabel on Tuesday (November 17) in West Hollywood, California.

Sarah Hyland: Playing with proportion, the actress wore a Vera Wang Spring 2016 red and black frock with Stuart Weitzman ‘Nudist’ sandals. This dress was all about duality—both bold and balletic with the whimsicality of the voluminous frou silhouette and the structure of the suspender straps and bandeau top underneath.

Vanessa Hudgens: I likewise did a double-take upon seeing Vanessa whose look more fully took on gothic form with her straight, jet-black locks and oxblood lip. Yet her Bec & Bridge Spring 2016 metallic-printed, sheer black cutout gown still possesed that romantic bohemian vibe for which she is known—just manifested in slightly darker style. 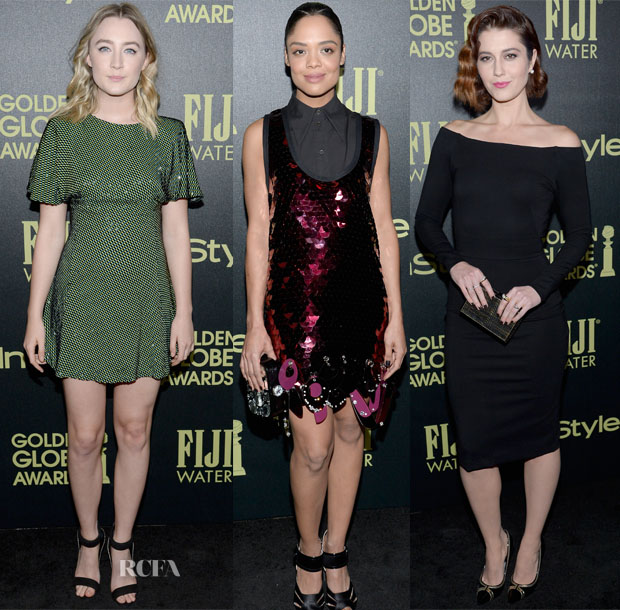 Saoirse Ronan: I found myself wishing that her shimmery Michael Kors Collection Resort 2016 dress had not been chopped so short from its original lookbook presentation. The result was a bit twee and seemingly ill-fitting.

Tessa Thompson: Leaving no shiny paillette unturned, the actress donned a Miu Miu Resort 2016 fuchsia dress styled with Miu Miu sandals and a Miu Miu clutch. From the dress shirt collar to the over-embellished glitz to the chunky ankle-strap shoes, it was all a bit too funky for its own good.

Mary Elizabeth Winstead: I actually found this body-con Atea Oceanie black, off-the-shoulder dress to be a breath of fresh air amidst the complexity of the other looks. Sometimes all you need is an LBD, especially one styled with primly retro Nicholas Kirkwood pumps, John Hardy jewels, and a Rebeca Minkoff Odette Clutch.