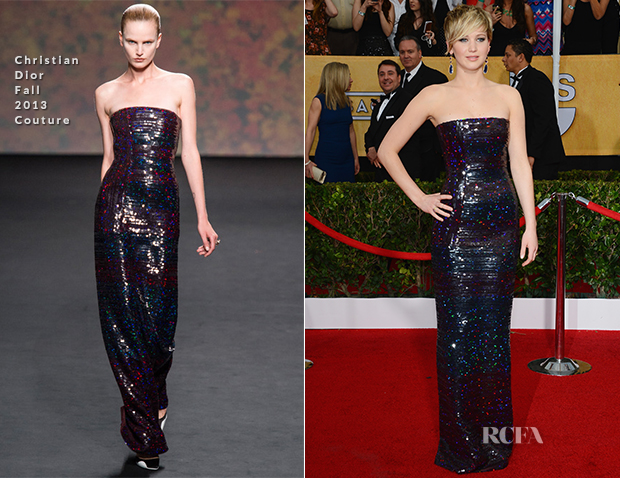 The ‘American Hustle’ star and outstanding supporting role nominee made a rather remarkable entrance in a Christian Dior Fall 2013 Couture gown with Brian Atwood heels.

The strapless column design featured a similar silhouette we’ve seen a number of times on Jennifer. But what really made this look so exquisite was the constellation of sparkling, multicolour sequins that added a glossy, dimensional layer to the dress.

Choosing her statement jewel to be her earrings, she wore a splendid, geometric-shaped gemstone pair by Jennifer Meyer.

She also toned down her makeup, with a smoldering smokey eye taking centre stage against a nude lip. The piece-y rendition of her choppy bob added extra edge, while the

While none of us will be shocked by the appearance of Dior again, what was extraordinary was the difference between this classically glamorous glitz and her 2014 Golden Globes gown from the same couture collection, which drew some unfortunate comparisons and not a whole lot of praise.