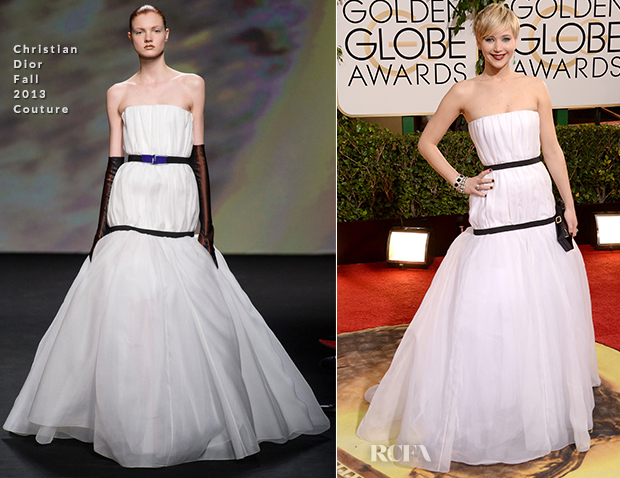 In what may not come as a big surprise to many, Jennifer Lawrence worked another Christian Dior design at the 2014 Golden Globe Awards, hosted at The Beverly Hilton Hotel in Beverly Hills, California on Sunday night (January 12).

On this occasion, the ‘American Hustle’ supporting actress nominee pulled no punches, even playfully joking on the red carpet that her decision to wear Dior was such a ‘shocker.’

Although we’ve come to expect Dior from Jennifer, it’s always still a guessing game as to exactly what kind of designer moment she’ll have. This time, her strapless white gown was from the Fall 2013 Couture collection, although it registered as a familiar silhouette to what we’ve seen before.

The gathered, full-skirted dress, which may have skewed slightly bridal upon closer inspection, was punctuated by two black ribbon bands to cinch in the waist and hip.

While she skipped the runway’s theatrical, elbow-length gloves, she did further pull the shade of black into the look with a clutch and gemstone bracelets.

A jade-tinged pair of pendant earrings provided a burst of brighter colour to the ensemble, which she finished off with a deep oxblood lip and kohl-rimmed eyes.

This mainly monochromatic entrance was really about a play between the contrast of white and black, light and dark. Did it work for you?