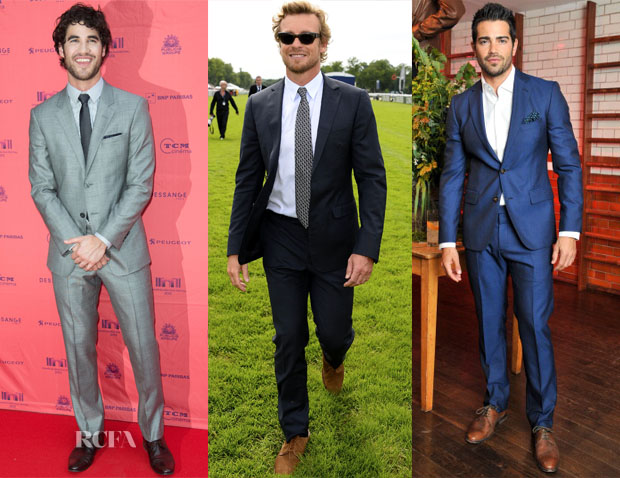 Let’s hear it for the boys, who have been criss-crossing countries this week to hit up the red-carpet scenes in style.

Darren Criss: In head-to-toe Emporio Armani, the ‘Glee’ cutie joined Kristen Wiig at the  ‘Imogene’ Paris premiere, as part of the 2013 Champs Élysées Film Festival at Publicis Champs Élysées in France on Tuesday. Even with his scruff and unruly curls, he still managed to look polished in this pewter-gray suit, worn with a micro-stripe shirt and micro-dot tie.

Simon Baker: The Aussie actor took to the field at the ‘Prix de Diane Longines’ 2013 at Hippodrome de Chantilly on Sunday in Chantilly, France, adding modern appeal to his standard dark suit and tie with heavy-rimmed sunglasses and camel lace-up oxford shoes.

Jesse Metcalfe: The hunky star had a model moment in his Reiss suit, as he made the rounds at a party hosted by ‘Men’s Health’ x Liberty x Oliver Spencer during the London Collections: MEN SS14 at Liberty on Monday in London. The bold blue colour juxtaposed with the stark white, tieless shirt and contrasting printed pocket square are what make this look stand out. 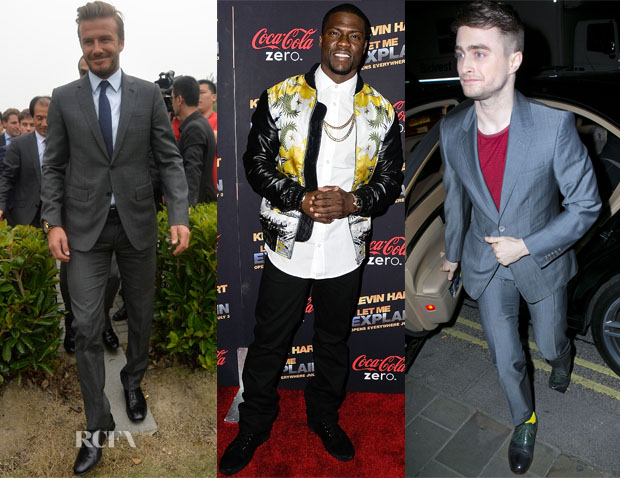 David Beckham: The British soccer stud stole more than a few stares when he visited Shanghai Shenxin F.C. on Wednesday in Shanghai, China. On anyone else, his all-business, conservative dark-gray suit and navy tie might have been a snooze. But with one swoop of his hair and all that swagger, he owns it. The scruffy, unshaven look is certainly trending with these guys.

Kevin Hart: The funny man was the main attraction at his ‘Kevin Hart: Let Me Explain’ New York premiere at Regal Cinemas Union Square on Wednesday in New York City. He may be short in stature, but he stood tall in a Hawaiian floral-print Cloth Surgeon bomber jacket that turned up the volume. Cool or fashionably comedic?

Daniel Radcliffe: This British boy stepped out for the after party of ‘The Cripple Of Inishmaan’ in London, England on Tuesday. He added some funk to his blue-gray suit (which brought out his baby blues) with a crimson T-shirt, neon yellow socks and forest-green ombre-effect oxfords.

A Week In Miranda Kerr’s Closet