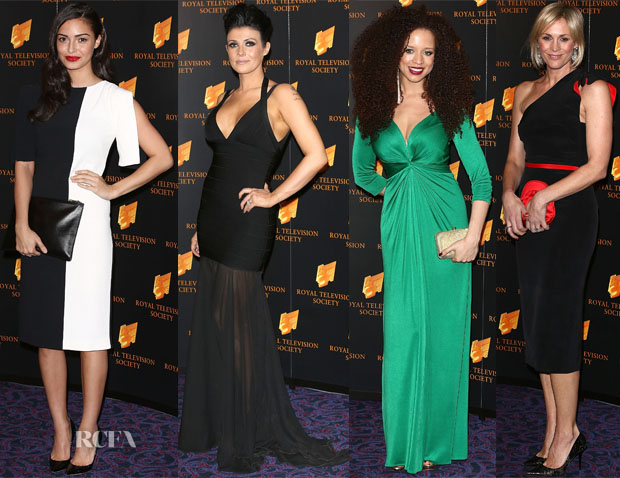 The RTS (Royal Television Society) Programme Awards took place at Grosvenor House in London yesterday evening. They span all genres of television programming, from soaps to history, children’s fiction to comedy performance, recognising exceptional actors, presenters, writers and production teams as well as the programmes themselves.

Anna Shaffer: Anna stood out for obvious reasons: not because she was bang on trend wearing black-and-white, but more because her Osman Yousefzada colour-block dress with split sleeves is very similar to the jumpsuit Beyonce Knowles wore to the 2013 Grammy Awards. Styling the look with side-swept glossy locks and black accessories, she added a touch of glamour via her red lip colour.

Kym Marsh: At first I thought the Coronation Street actress was wearing a Herve Leger gown, but her fitted bandage dress with a chiffon train was designed by Elle Luna. Always one to stand out on a red carpet, she completed her look with a swept-up bouffant and dramatic kohl-rimmed eyes.

Natalie Gumede: The talented Coronation Street actress wore a very familiar Issa gown, featuring the signature twist front and plunging neckline. The colour is heavenly against her skin tone and I love the addition of a gold clutch, but as always I have hair envy.

Jenni Falconer: The TV presenter, who hasn’t changed her hairstyle in over 10 years, wore a Tabitha Webb LBD with an asymmetrical neckline. The red waistband matched the red lining of the dress, and Jenni added more red to her look via her satin clutch and nail polish. Black sequinned pumps completed her look. You may remember that Miranda Kerr wore this same dress in yellow earlier this year.