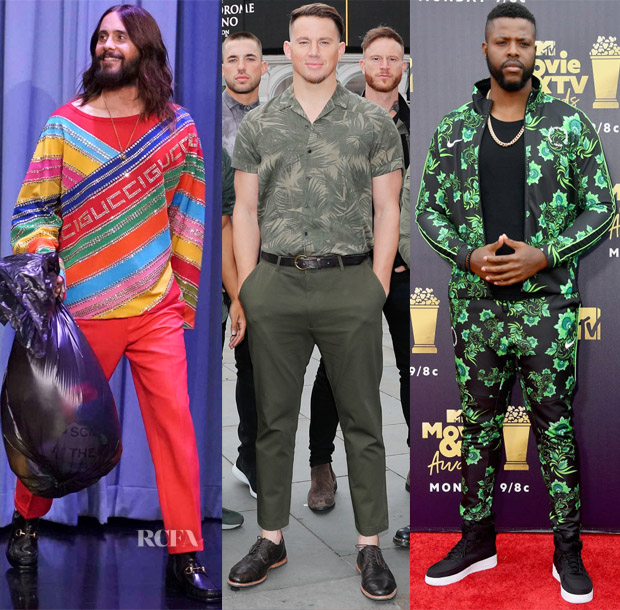 It’s been a busy week when it comes to mens fashion, so here is our roundup.

Jared Leto: The ‘Thirty Seconds to Mars’ star made a guest appearance on ‘The Tonight Show Starring Jimmy Fallon’ where he donned a Gucci Cruise 2019 look consisting of a technicolor sweater and fiyah red trouser. Let’s hope that bin bag contains some of his less fortunate red carpet looks.

Channing Tatum: The actor was recently in London to present ‘Magic Mike Live’. While I’m not usually a fan of cropped trousers on men, this Arcady pair was looking very sharp, especially when paired with his palm-print shirt. Timberland shoes completed his look.

Winston Duke: The one thing I wanted ahead of the 2018 World Cup was to get my hands on the Nigerian football kit (and my heritage is Sierra Leone), but the entire collection sold out in around 3 minutes. The Trinidadian American wore his Nike tracksuit, in true naija fashion with a gold chain plus high-top sneakers. 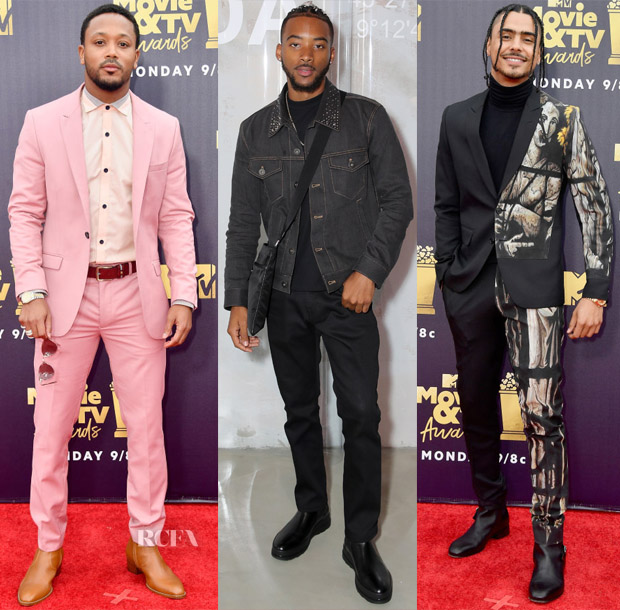 Romeo Miller: What’s the saying? Real men wear pink? And I was fully on board with the rappers rose-pink Topman skinny suit worn to the MTV Movie and TV Awards. What I wasn’t so sure about was the brown belt with the camel shoes. I think he should’ve picked the same colour for both.

Algee Smith: The ‘Detroit’ actor wore an all Prada look for the Prada Spring 2019 men’s show in Milan this week. I love the detail on the collar of his jacket, but I wanted him to lose the crossbody bag.

Quincy Brown: I was intrigued by this look for two reasons. Firstly I love how the all-black fitted suit features half printed graphic design. And secondly, I’m surprised this was from Michael Cinco, as I didn’t know he did menswear. 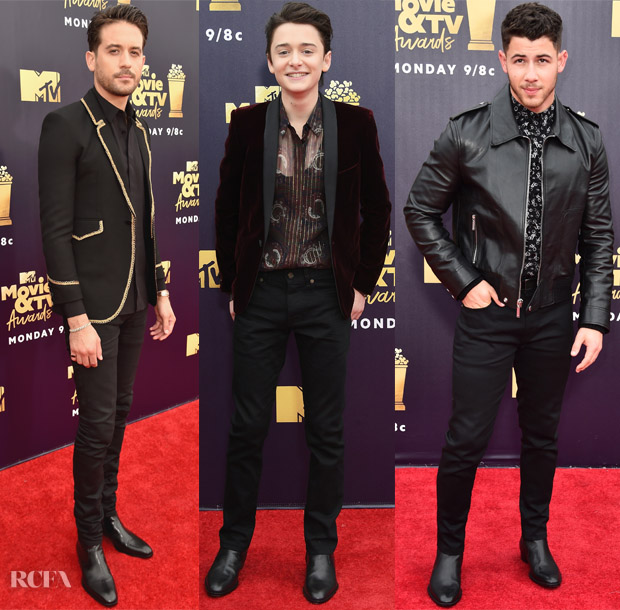 G-Eazy: The musician often wears Saint Laurent, and the MTV Movie and TV Awards was no different. I love the gold trims on his blazer, but I’m questioning the length of this sleeves.

Noah Schnapp: The young ‘Stranger Things’ actor was also in Saint Laurent. I can live with the plush velvet blazer, but the jury is still out on the sheer shirt.

Nick Jonas: Also in Saint Laurent, my feeling is that of déjà vu, as Nick does this same look time after time. 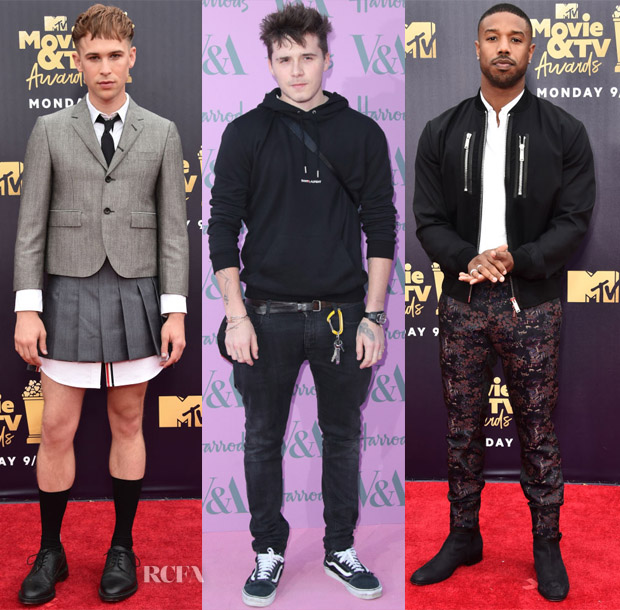 Tommy Dorfman: Only Tommy Dorfman could sell this Thom Browne suit and skirt combo to me.

Brooklyn Beckham: The student, photographer…whatever, opted to wear a Saint Laurent sweater to the V&A Summer party this week. It’s all a bit scruffy from the waist down for my liking, but I guess he’s just a kid so it’s acceptable on some level.

Michael B Jordan: When I look back at the ‘Black Panther’ tour, my feeling was that Chadwick Boseman stole the spotlight, but then when I look at this, I realise that truly, Michael has kinda lost his way. Had he rocked the blazer belonging to those trousers, I would’ve worshiped this look. 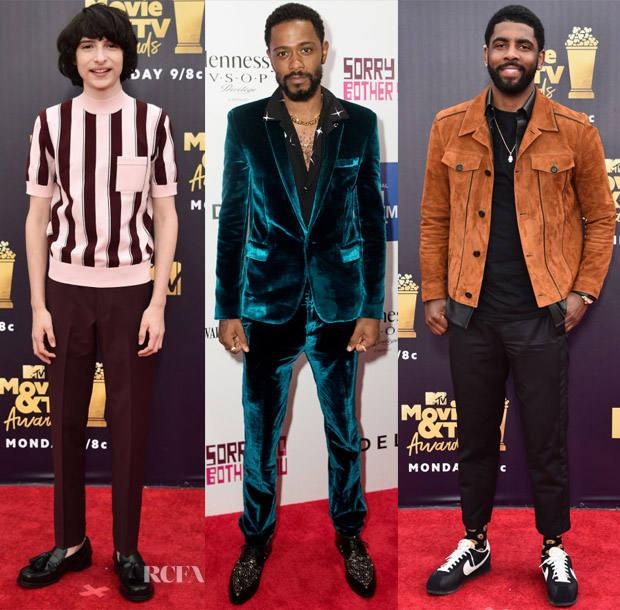 Finn Wolfhard: The ‘Stranger Things’ star is usually always suited, so I was refreshing to see him in this more youthful look from Prada.

Lakeith Stanfield: It looks like velvet in summer isn’t exclusive to the ladies, as the actor wore a petrol blue Saint Laurent suit to the ‘Sorry To Bother You’ New York premiere this week. Let’s face it, the look is very P.I.M.P., but he rocks it with class.

Kyrie Irving: The actors Salvatore Ferragamo suede brown jacket from the Pre-Fall 2018 collection is what makes this look stand out. 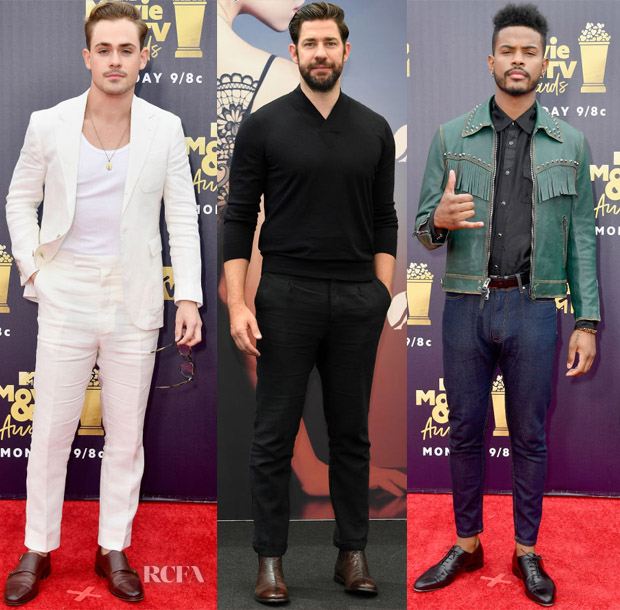 Dacre Montgomery: I really admire Dacre for donning this all white look from the Stong Suit by Ilaria Urbinati Collection. It’s not an easy look to pull off, but he does so successfully. I think it’s because this suit is off-white in contrast to his vest.

John Krasinski: The actor was in Monte Carlo for the Monte Carlo TV Festival this week. Usually I’m all about colour and details, but this all black look which featured Arcady trousers managed to make me swoon. Emily is a very lucky woman.

Trevor Jackson: Judging by this look, it would appear that cropped trousers are very much a thing in menswear fashion right now. The actor styled his jeans with a Coach western embellished jacket and western print shirt.