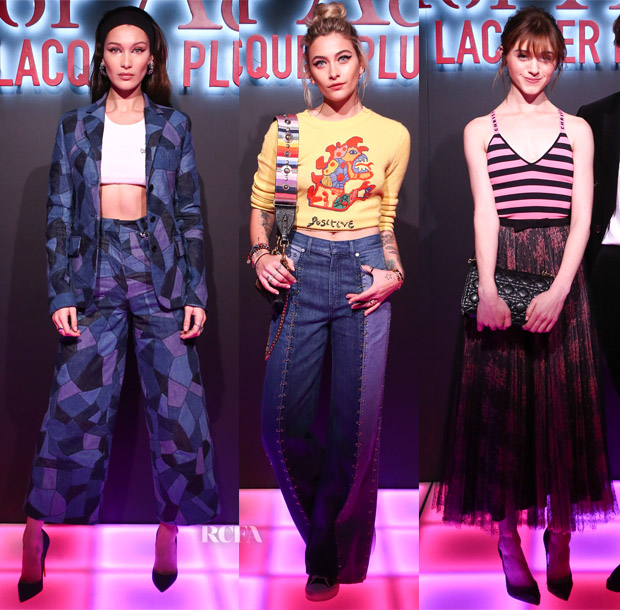 Dior darlings were out in force to kiss and tell at the Dior Addict Lacquer Plump Launch with Bella Hadid on Wednesday (March 14) in LA.

Bella Hadid: The host and girl of the hour threw it back to the ’60s in this Dior blue patchwork denim coat with a white shrunken shirt and matching, cropped jeans. I love how she fully embraced the retro-mod aura with her winged eyeliner and blush-nude pout.

Natalia Dyer: When it comes to throwback vibes, the ‘Stranger Things’ starlet had a true ‘Pretty in Pink’ moment with this Dior pink and black striped bodysuit worn with a pink lace pleated skirt. When styled with her wispy updo and a black Dior ‘Addict’ bag, this look had me charmed with its sweet and sassy sides. 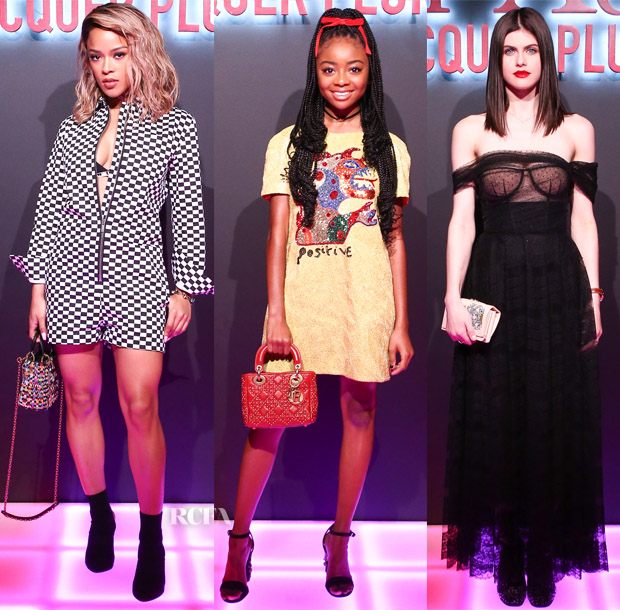 Serayah: Making this graphic, black-and-white checkered Dior shorts jumpsuit her own, Serayah brought some allure to the party by wearing it half unzipped for a peek-a-boo effect. The beaded ‘Lady Dior’ bag was a playful addition to the eye-popping look.

Skai Jackson: The starlet was also feeling the ‘positive’ vibes with this Dior yellow allover sequin dress that echoed the dragon we saw in Paris’s look. I love how she brought an adorable twist to this offering, though, with her red hair ribbon and red and gold mini ‘Lady Dior’ bag.

Alexandra Daddario: Things got a lot more provocative when it came to Alexandra’s off-the-shoulder Dior tulle dress with sheer elements. Dior mirror embroidery ‘Hardior’ booties and a Dior tarot card clutch—not to mention that dramatic red pout—finished out the look. 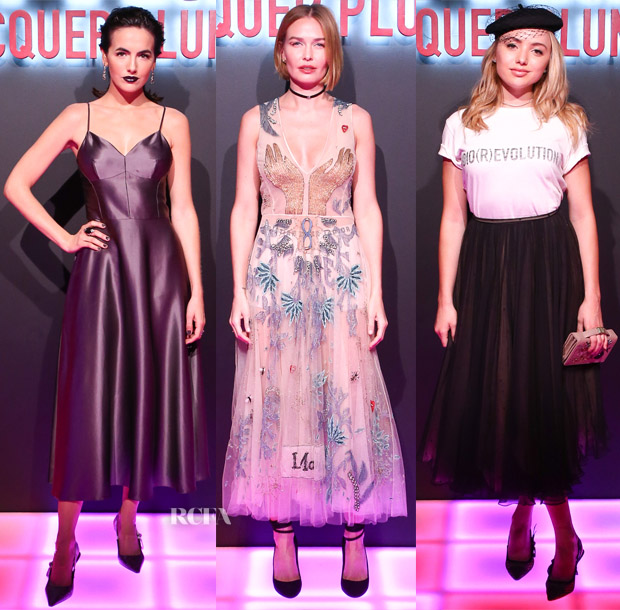 Lara (Bingle) Worthington: You may recognize the signature Dior tarot-card-inspired embroidery of this nude tulle dress with the Christian Dior briefs to serve as the underpinning.

Peyton List: I was getting a strong Parisian aesthetic from this youthfully chic Dior white cotton ‘Diorevolution’ T-shirt and black pleated skirt. Berets don’t always translate, but this Dior black veil beret in partnership with Dior heels and a Dior tarot clutch suited this look so well. 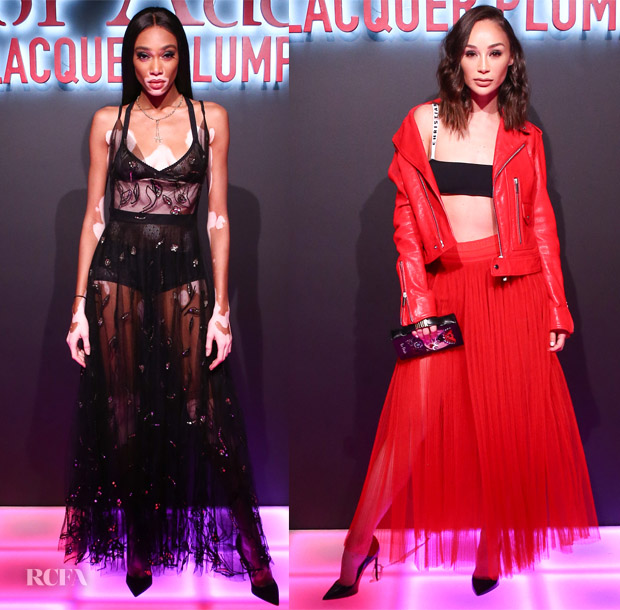 Winnie Harlow: The model is fond of sheer looks, so I wasn’t surprised to see her in this Dior dress that featured beautifully glinting embroidery along with Dior black pumps to round it out.

Cara Santana: Fiery in more ways than one, this Dior red leather jacket and red tulle pleated skirt oozed with edgy sultriness, especially when styled with the Dior bralette. The Dior tarot clutch completed the look, to which she opted to go for a nude pout—as there was enough red as it was. 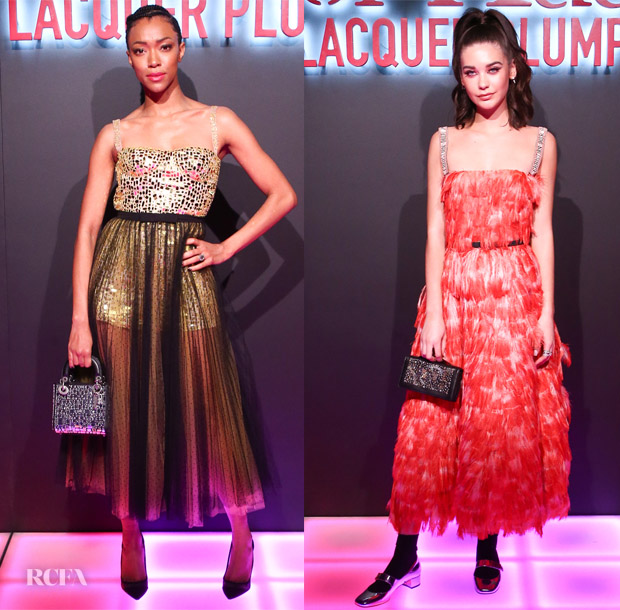 Sonequa Martin-Green: The mosaic motif was the M.O. of this look that featured a Dior yellow mirror-embroidered short jumpsuit and mirrored ‘Lady Dior’ bag. I like how the yellow pleated plumetis open skirt added an overlay of girlish femininity to the feisty metallic shine.

Amanda Steele: Offering up a flight of fancy, this feathered Dior bustier dress came equipped with plenty of whimsy, to which Amanda added a quirky finish with Dior silver ‘Baby-D’ shoes and a Dior tarot clutch. If those feathers look familiar, it’s because the frock was previously worn by Hayley Atwell. 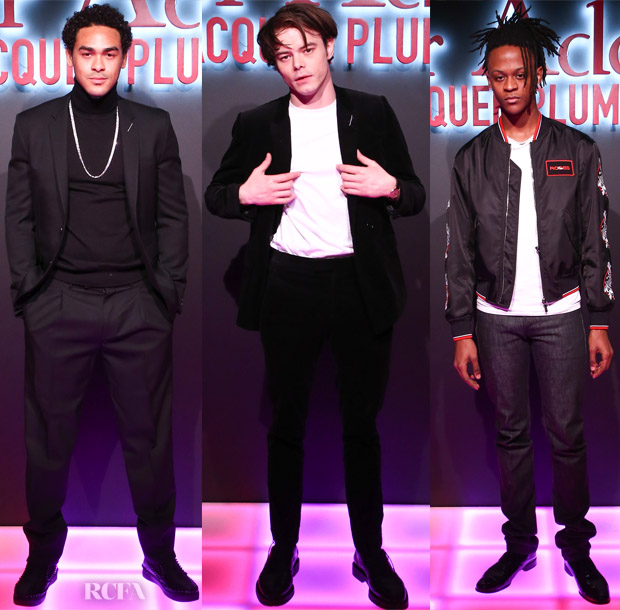 Trey Smith: The monochromatic thing was working for Trey in this Dior Homme suit and turtleneck, with the black palette only interrupted by a singular white lapel stitch and silver necklace.

Myles O’Neal: I like how Myles introduced an urban edge to his Dior Homme embroidered bomber jacket enhanced with ‘Rose’ patches on the sleeves and styled simply and effectively with a white tee and slouched-hem denim.