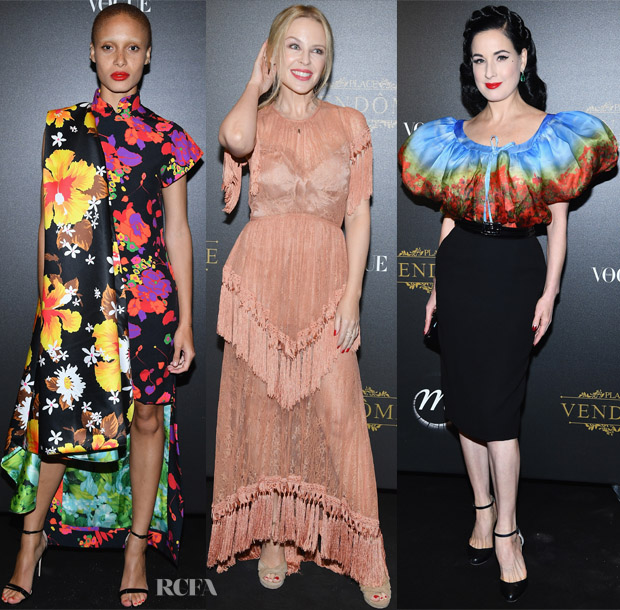 A private viewing, hosted by Vogue, for the Irving Penn exhibition at the Grand Palais was held on Sunday (October 1) during Paris Fashion Week.

Adwoa Aboah: Taking a break from walking the runways at Paris Fashion Week, Adwoa posed in a Richard Quinn Spring 2018 look that offered an invigorating, happy mix of ditzy florals. You would think with so many bold, competing prints that this would translate as disjointed. But, on the contrary, I loved this look on Adwoa, and I also credit its success to her minimal approach to the styling, with a black sandal and red pout all she needed. Flower power, indeed.

Kylie Minogue: I think it’s safe to say that Kylie put this Alice McCall ‘More Than A Woman’ fringe gown to work for her—as it was made to be spun around. As fun as it was, I was a bit tassel fatigued and the muted, mauve-pink colour wasn’t my favourite for the vibrancy of the entertainer, but she attempted to bring a splash of vividness via her lipstick.

Dita von Teese: With a look that riffed on the field-of-poppies print from the Jean Paul Gaultier Spring 2017 Couture collection, Dita maximized proportions with this look. I have mixed feelings on the balloon sleeves, as they might be lumped into a costume-y circus category. But, the colours were striking in contrast to the black pencil skirt. 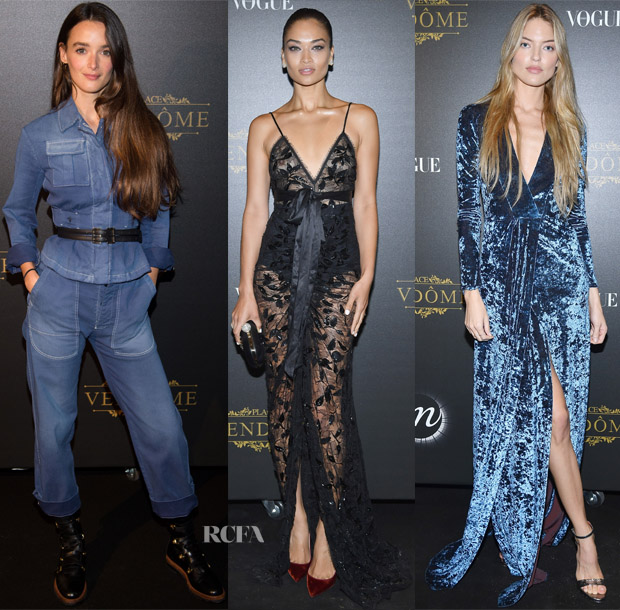 Charlotte Le Bon: Taking a far more casual approach, Charlotte capitalized on the all-denim trend we’ve been seeing pop up on occasion with this Christian Dior Fall 2017 set. Echoing the work-wear aesthetic, she completed the look with heavy-duty black boots. I am glad she wore this look with more tailored proportions and added the black belt. Her flowing locks didn’t exactly fit the mood, but provided a nod to girly femininity I suppose.

Shanina Shaik: As the obsession with the sheer trend continues, the model left little to the imagination in this overtly sexy Roberto Cavalli black lace gown styled with Budellati jewels, a Roger Vivier clutch, and Christian Louboutin velvet pumps. Despite its ubiquitous, see-through quality, the look was sleek and well-composed, but I would have opted for a black sandal here. Why cover up the feet with velveteen when everything else is exposed?

Martha Hunt: The high slit in this Galvan Fall 2017 hammered velvet dress ensured the fabric-heavy design still possessed a sense of subtle seductiveness. I do think the look could have used a sleek hairstyle or bun. 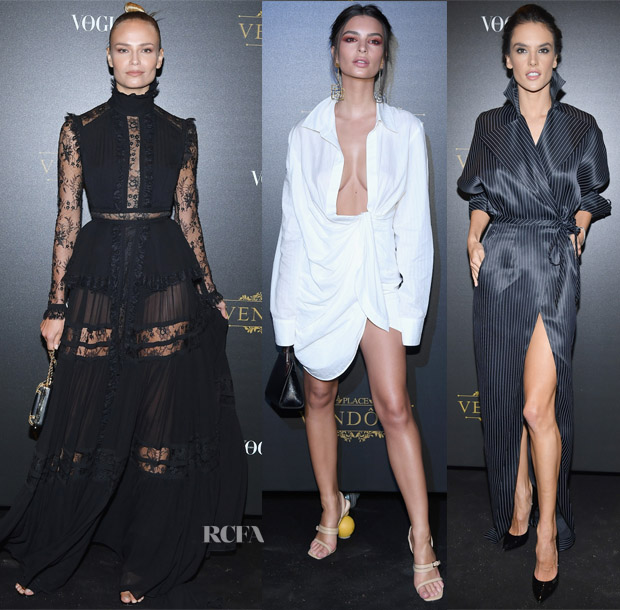 Natasha Poly: While this darkly romantic, sheer lace and ruffled, high-neck Elie Saab gown could have easily become overcooked, Natasha ensured that was not the case as she styled it so sleekly with her slick, sculptural updo and minimal accessories.

Emily Ratajkowski: This plunging, side-knotted Jacquemus Spring 2018 shirt dress was meant to be sultry for sure. But, I found it was too big for its own good on Emily—with the sleeves the biggest offender. As presented, it looks like she’s haphazardly wrapped an extra-large men’s shirt around her body.

Alessandra Ambrosio: I’ve been enjoying seeing Alessandra’s quieter, classic take on glamour lately, and this Ronald van der Kemp Spring 2017 Couture robe gown followed in similar footing with its relaxed, streamlined silhouette punctuated by the high slit to guarantee that the sexy edge was still alive and well amidst the menswear-inspired pinstripes. 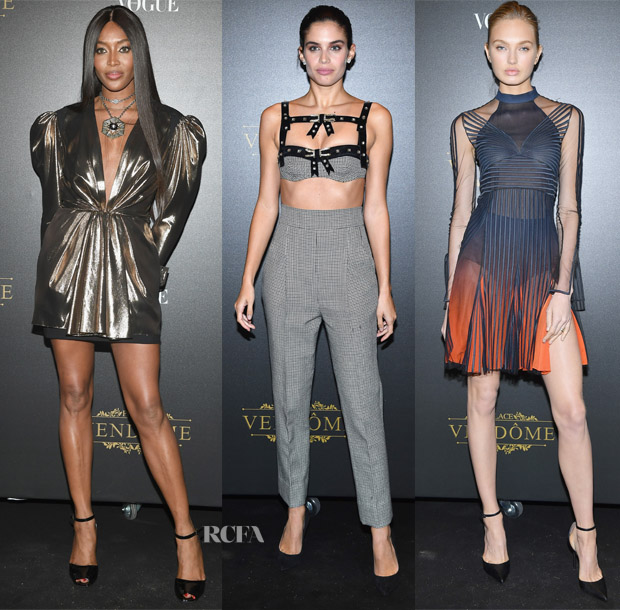 Naomi Campbell: The supermodel put her pins on display in this Saint Laurent Spring 2017 metallic mini although I have to say that the intentional oversized, droopy quality of the pouf shoulders wasn’t my favourite silhouette for her.

Sara Sampaio: The main focal point of Sara’s Philosophy di Lorenzo Serafini Fall 2017 ensemble was most certainly the bustier harness top that had a vintage pin-up appeal. I did wish for the runway’s belt for the high-waist trousers, as a better way to finish the look.

Romee Strijd: Although this was another sheer look, the intriguing paneling and the vividness of the ombre-esque orange panels in the plisse skirt was a fresh offering in this Versace Fall 2017 frock. Her black heels, on the other hand, would not have been my first choice, as a tonal blue or orange sandal would have been preferred.