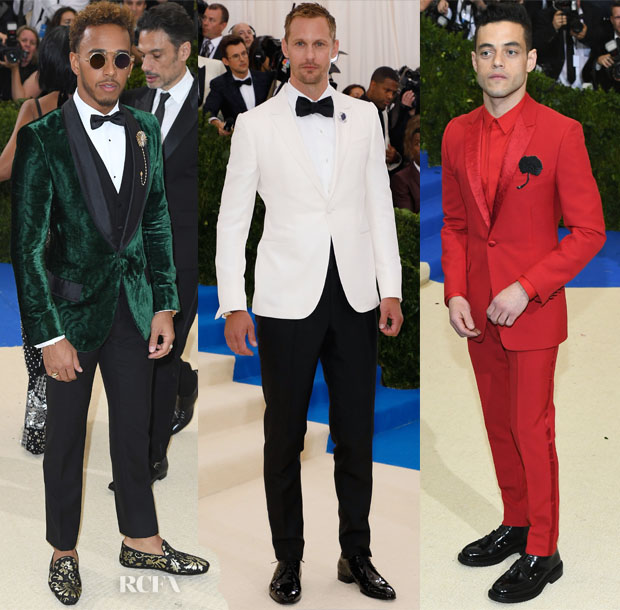 As one of the biggest nights in fashion, the 2017 Met Gala boasted a number of menswear looks that rose to the occasion on Monday (May 1) in New York City.

Alexander Skarsgard: I was head over heels for this impeccable, white-hot Ermenegildo Zegna Couture tuxedo.

Rami Malek: We saw many ladies in red, and I loved how Rami brought the hue of the evening in this Dior Homme suit, accented by a floral pin and shiny patent dress shoes. Handsomely on theme—in all the best ways. 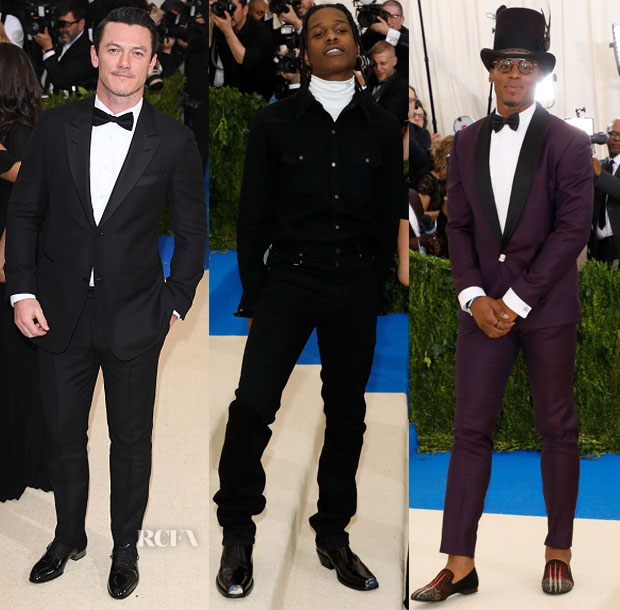 Luke Evans: There’s no denying this Louis Vuitton tuxedo was at the epitome of classic, crisp elegance—even if it had nothing to do with the theme.

A$AP Rocky: I simply didn’t get the rationale for this Calvin Klein ensemble that featured a work shirt over a turtleneck and slouchy black jeans, as it was sloppy at best.

Cam Newton: Obviously going for the shrunken look, this deep burgundy Versace tuxedo just seemed overtly too small making for a rather comical showing with the gigantic top hat. 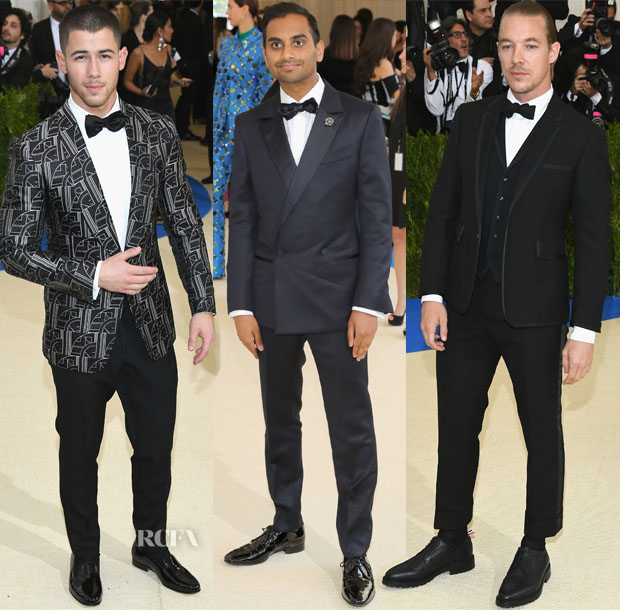 Nick Jonas: Cutting a fine profile, Nick was on point in this Ralph Lauren ensemble. The hero of the look was the tuxedo jacket with its graphic, geometric motif.

Diplo: Here, the cropped proportions of this Thom Brown three-piece suit struck the right avant-garde balance to play into the theme. 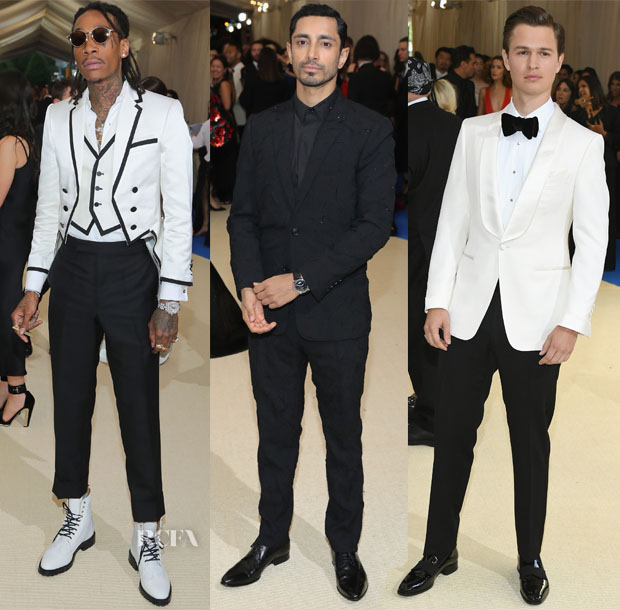 Ansel Elgort: There is something just so elegantly polished about a white dinner jacket worn right, and this Tom Ford tuxedo delivered. 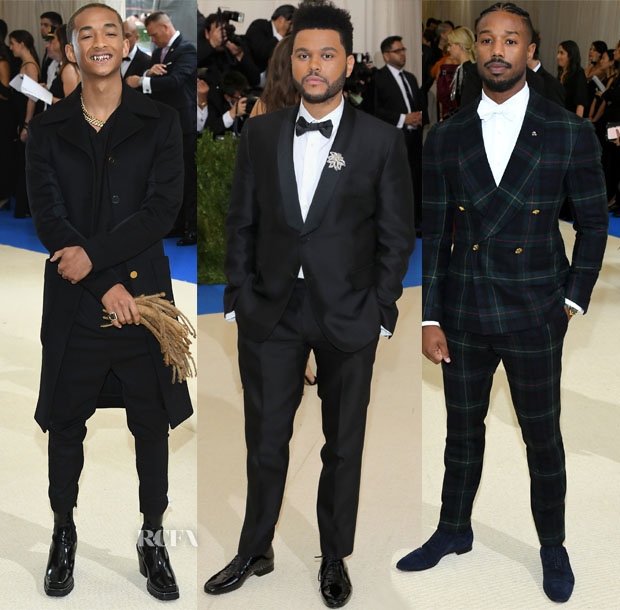 Jaden Smith: This was actually a decent Louis Vuitton ensemble. Unfortunately, no one was looking at it with Jaden’s choice accessories. Carrying a mess of dreadlocks while wearing a grill is certainly one way to be provocative.

The Weeknd: Conservatively elegant, The Weeknd was polished in a traditional Valentino black tuxedo.

Michael B. Jordan: Plaid came out to play a few times in the women’s looks of the night, and Michael brought his own rendition in this Ralph Lauren suit styled with a white dress shirt and bow tie, all of which he wore impeccably. 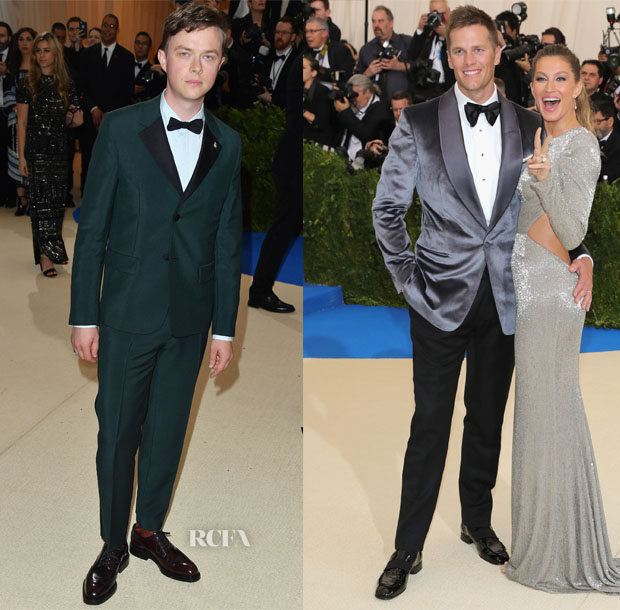 Dane DeHaan: I appreciate the turn towards a shade other than black, but this deep emerald Prada tux still translated as a bit lacklustre. I blame the fit.

Tom Brady: Standing alongside the gorgeous Gisele Bundchen, Tom basked in her radiance and echoed the metallic M.O. with a charcoal-silver Tom Ford jacket styled with a traditional black bow tie and dress pants. 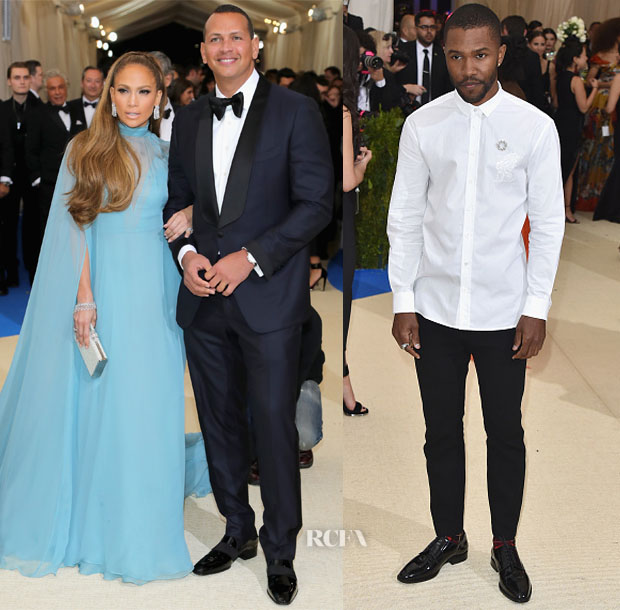 Frank Ocean: Despite the fact that this was a custom Balmain ensemble, I was struck with the feeling that something was missing. 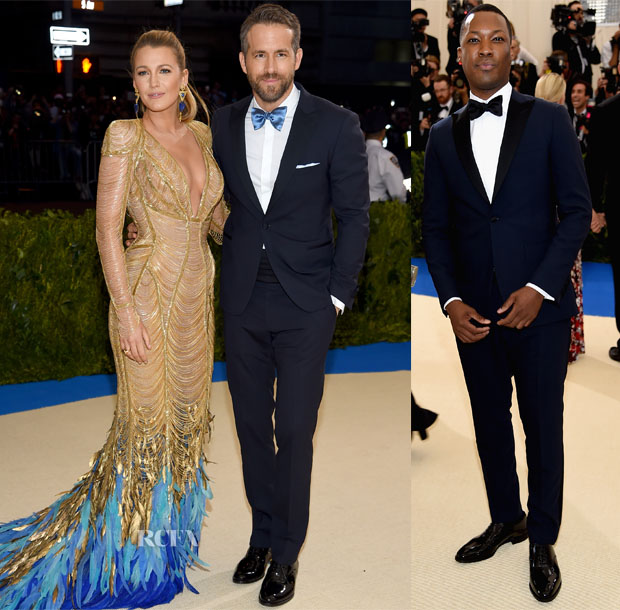 Ryan Reynolds: Also wearing Versace like his wife, Blake Lively, Ryan coordinated his blue bow tie to the feathers in her skirt, winning this couple the matchy-matchy award of the night.

Corey Hawkins: Corey was sharp in a well-tailored Todd Snyder tux in a rich shade of midnight blue.