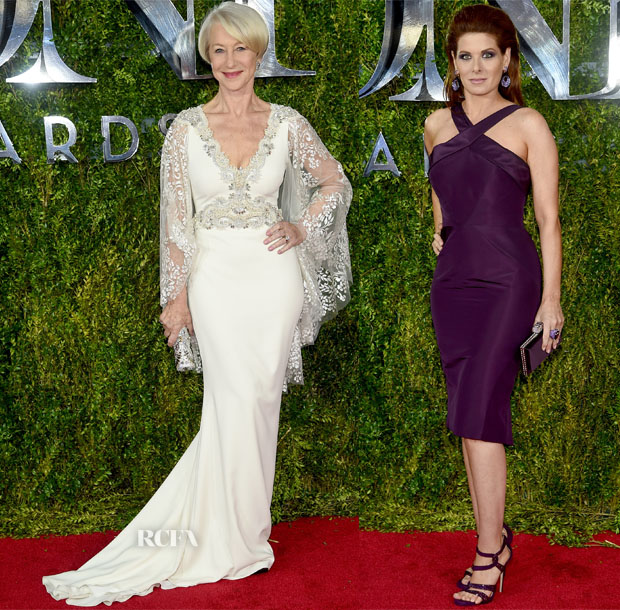 The beauties at the 2015 Tony Awards, hosted on Sunday night (June 7) at Radio City Music Hall in New York City, brought no shortage of sartorial drama with bold hues and glamorous style. Here, a look at more of the entrances on the red carpet.

Helen Mirren: Elegant as always, the actress wore a Badgley Mischka lace-embellished gown with Fred Leighton jewels and a Judith Leiber clutch. The wedding aisle would have been another appropriate venue for this dress.

Debra Messing: Although her Zac Posen dress was short, it delivered on the drama by virtue of the saturated violet hue that was especially striking with her auburn locks. While I normally find the matchy-matchy angle tiring, the tonal Judith Leiber clutch, sandals, and jewels all work in her favour here to create a streamlined, regal effect. 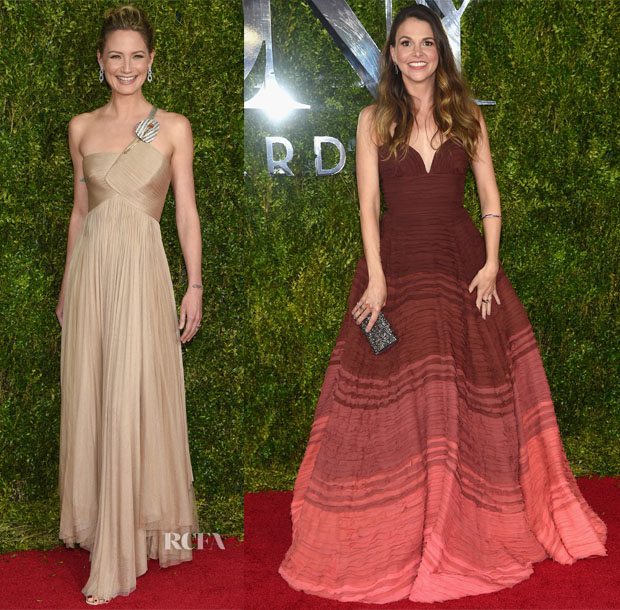 Jennifer Nettles: The Sugarland singer’s Giorgio Armani Spring 2015 gown, itself the colour of spun sugar, was sleekly sophisticated. I loved how the Chopard jewels, particularly the orchid-inspired brooch, took the minimalistic look to the next level and imparted a personalized touch.

Sutton Foster: The beautifully voluminous proportions of the actress’s Naeem Khan ombre ball gown would have been far better served with a sleek updo. Fred Leighton jewels and a Judith Leiber clutch added a flash of sparkle to the look. 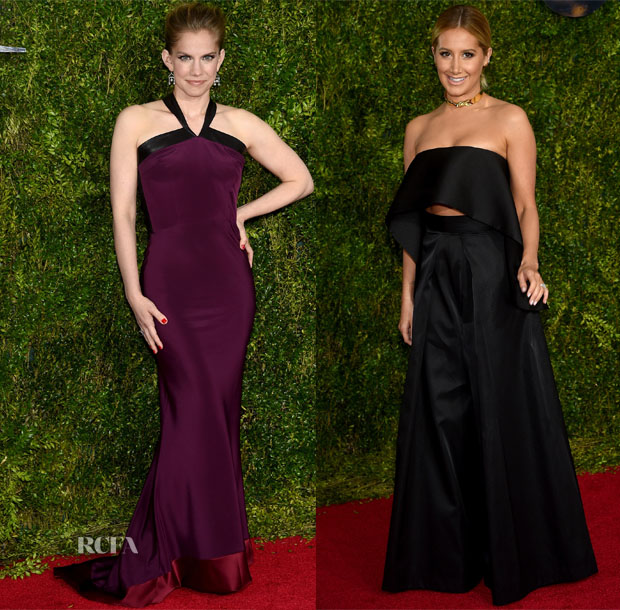 Ashley Tisdale: While I appreciate the actress’s attempt at a more directional look in a Solace London Spring 2015 black top and wide-leg trousers, I didn’t find the pieces to be particularly flattering. 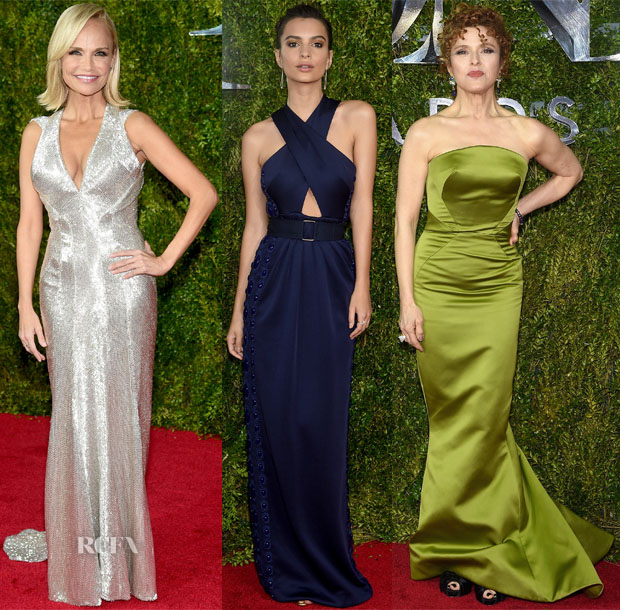 Emily Ratajowski: I was pleasantly surprised to see the model-actress in a more sleekly conservative—by her standards—Marc Jacobs structured navy gown with striking embellishment down each side. Subtle allure came in the form of the halter neckline and cutout detailing at the front and back with Forevermark Diamonds completing the look.

Bernadette Peters: While she was on the right track in the bright peridot-hued Zac Posen Resort 2016 gown, I wish the fit had been better in light of the unfortunate creases at the waist and hips. She accessorized with David Webb jewels along with black platform heels, which I’m glad stayed hidden for the most part under her dress. 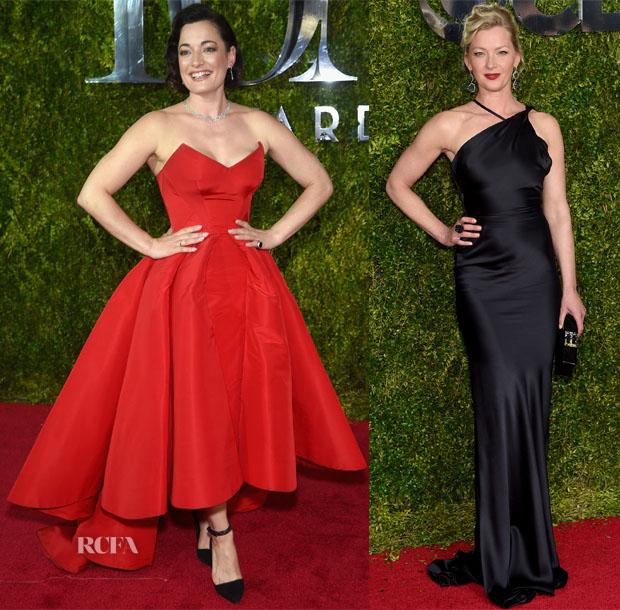 Laura Michelle Kelly: The British singer-actress was the epitome of old-Hollywood glamour in a red Zac Posen high-low gown styled with Forevermark Diamonds and black, ankle-strap pumps. The pin curls followed in the same vintage spirit, which only made me wish even more for a red lip to add a pop of allure to her beauty look.

Gretchen Mol: With many stars wearing bright shades, Gretchen made a striking impact for going in the opposite direction in an all-black, custom Sophie Theallet asymmetrical gown, only reserving the bold colour for her crimson lip. 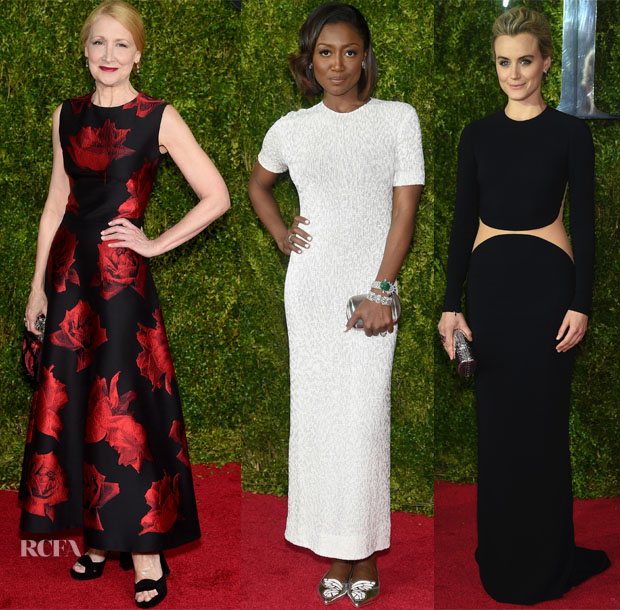 Patricia Clarkson: Everything was coming up roses for the actress who wore an Alexander McQueen Fall 2015 floral-printed gown with a ‘Poppy Cage’ box clutch from the Pre-Fall 2015 collection. Given the ankle length of the frock, a less blocky black sandal would have been preferred.

Patina Miller: While the white beaded Jason Wu Fall 2015 dress was deceptively simple, the Broadway star added plenty of personality with Fred Leighton jewels including two dazzling cuff bracelets. I do question the silver butterfly flats, as they were a rather quirky way to polish off the glittering look.

Taylor Schilling: The illusion cutout, which featured visible seams from the side and back, put a damper on this sleek black Michael Kors Resort 2016 gown. 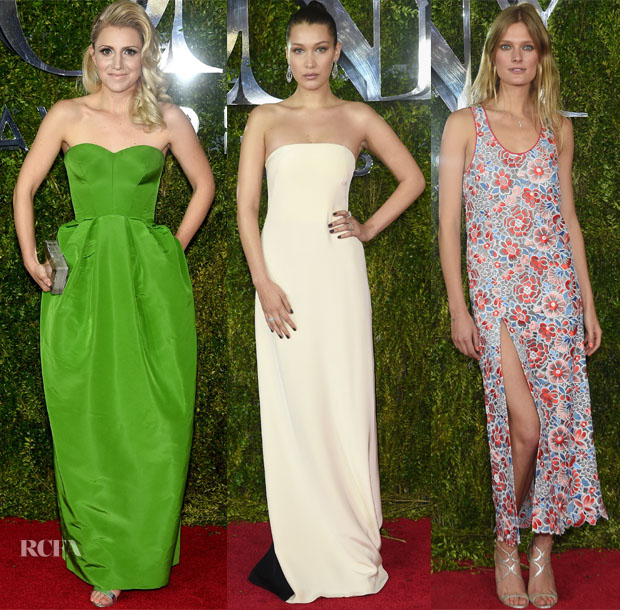 Annaleigh Ashford: The radiant, grass-green Zac Posen Fall 2015 frock was delightful, although a pretty coral-pink lip would have been the perfect bright contrast as opposed to her nude gloss. A metallic Rauwolf clutch and sandals finished the look.

Bella Hadid: The quiet charm of the cream Prabal Gurung Fall 2015 strapless gown gave way to striking black paneling and ruffle detailing down the back for a look that made an impact both coming and going.

Constance Jablonski: The model’s flower-power Wes Gordon slit-to-there tank dress was a bit on the casual side in comparison to some of the other looks of the evening. Her signature, less-is-more beauty look didn’t exactly put the ensemble on more formal ground either. 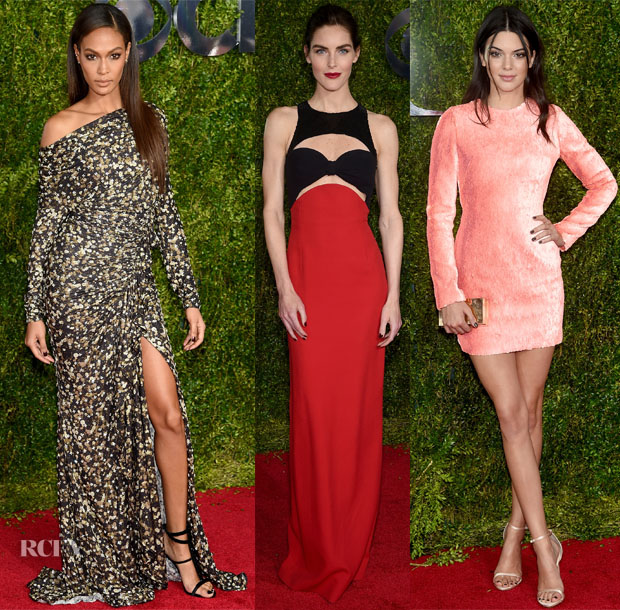 Joan Smalls: Strutting out a Givenchy Fall 2015 printed, off-the-shoulder gown, the model maintained an aura of relaxed ease that still had a seductive edge thanks in large part to the thigh-high slit and Giuseppe Zanotti black sandals.

Kendall Jenner: While the light peachy-pink hue of this Calvin Klein Collection sequin mini-dress was lovely on Kendall, the ensemble would have benefited from a polished updo. A golden metallic Calvin Klein clutch and nude sandals completed the look.