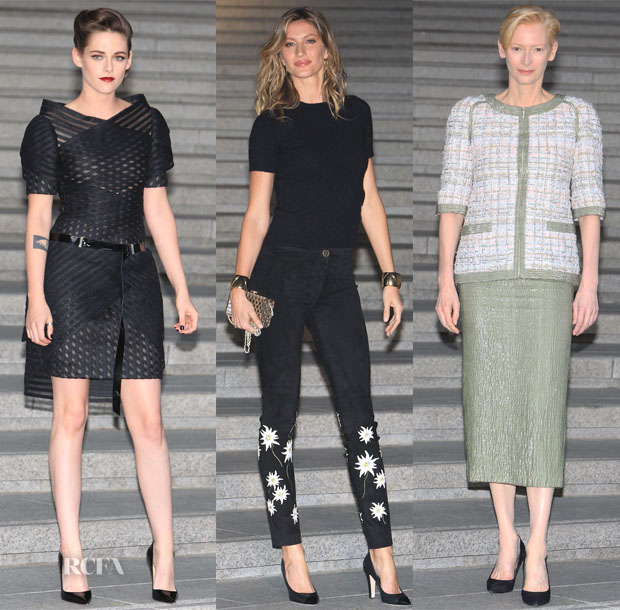 While the 2015 Met Gala was enlivening New York City with extravagant style, across the globe in Seoul, South Korea, another fashionable scene was occurring on Monday (May 4) with the Chanel Resort 2016 show.

Kristen Stewart: As the face of the Chanel Spring 2015 bag campaign, the actress represented the fashion house in a Chanel Spring 2015 Couture dress accessorized by Chanel Fine Jewelry. With a sculpted lattice aesthetic and an engineered sense of modernity, the LBD was perfectly suited to Kristen’s style. I just wish her equally sculpted updo had been more youthfully inspired.

Gisele Bundchen: As the face of Chanel N°5, the supermodel took a more casual, dressed-down approach in Chanel Pre-Fall 2015 black separates made fun with whimsical flowers decorating the pant legs. She can make anything look good.

Tilda Swinton: The actress’s Chanel Spring 2015 Couture ensemble unfortunately translated as rather dowdy. The black pumps were the biggest sin of the outfit, harshly contrasting the lighter pastel shades of the tweedy separates.