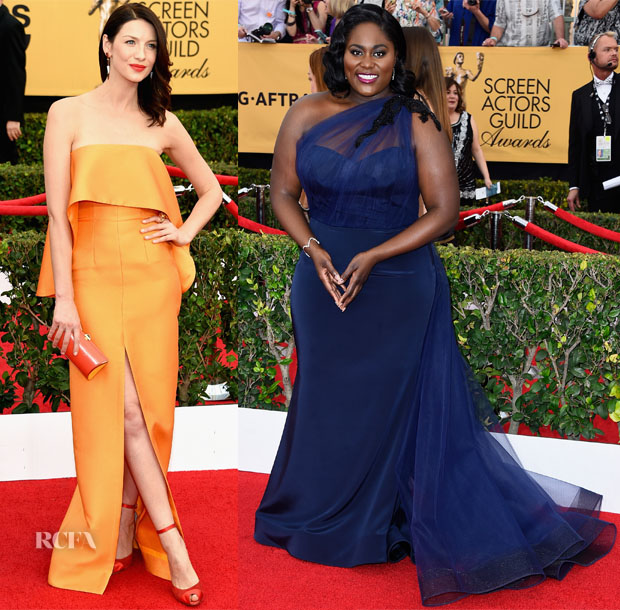 Here is a quick roundup of some of the other attendees of the 2015 SAG Awards held at the Shrine Auditorium on Sunday (January 25) in Los Angeles, California.

Caitriona Balfe: The ‘Outlander’ actress certainly caught my attention in her saffron-hued Solace London strapless gown styled with red Gianvito Rossi sandals, a blood-orange Rodo clutch, Vhernier earrings and a Neil Lane ring. This is one of my favourites of the night.

Danielle Brooks: The ‘Orange is the New Black’ actress stunned wearing a navy Christian Siriano gown. The body-enhancing gown with the delicate tulle overlay on the bodice and the sweeping train is easily one of her best looks to date. She looked radiant. 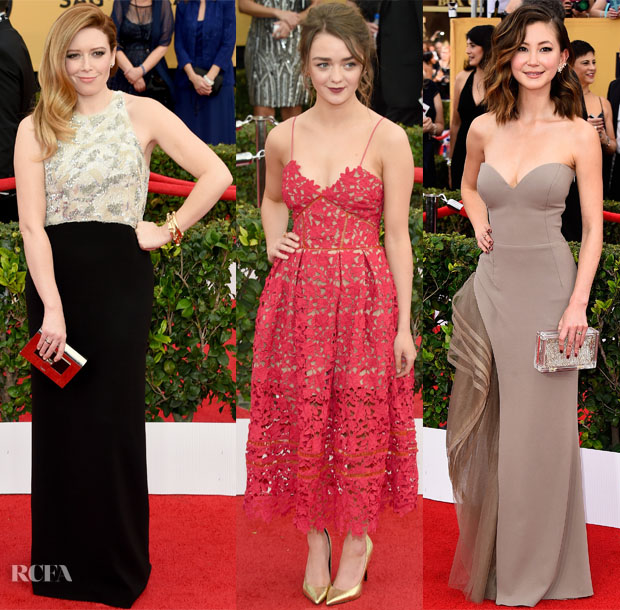 Natasha Lyonne: The ‘Orange is the New Black’ actress wore a custom Proenza Schouler black crepe dress with silver and cream embroidery styled with a Proenza Schouler metallic clutch. Again, this is her best look yet. She has never looked more glamorous while still keeping in touch with her laidback style.

Maisie Williams: There is often a temptation to put young actresses in big poufy gowns, so I was delighted to see the ‘Game of Thrones’ actress looking youthful, modern and sweet wearing a laser-cut Self-Portrait red tea-length dress styled with gold pumps.

Kimiko Glenn: Don’t those ‘Orange is the new Black’ actresses scrub up well? I adored the taupe hue of Kimiko’s Gemy Maalouf strapless sweetheart-neckline gown against her skin tone. The streamlined silhouette is broken up with an elegant cascading tulle ruffle from the hip. J’adore from head to toe. 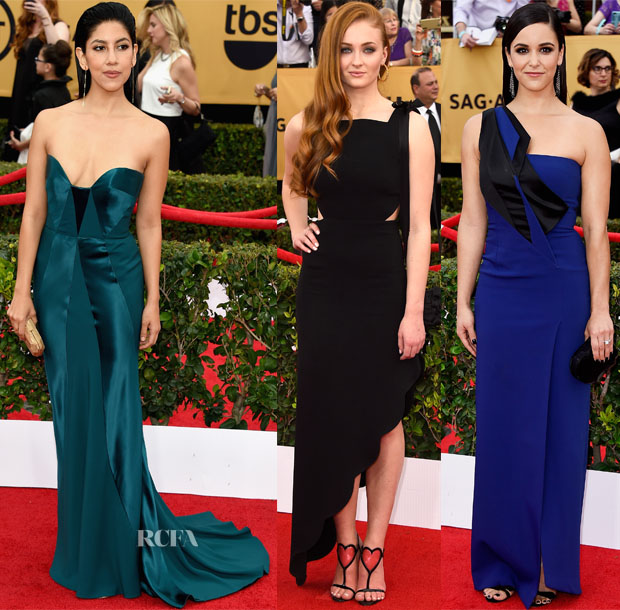 Stephanie Beatriz: Considering the ‘Brooklyn Nine Nine’ actress’s Johanna Johnson imperial emerald gown was custom made, I couldn’t figure out why the bodice fitted so poorly. It looked like it was about to slip down at any second.

Sophie Turner: The ‘Game of Thrones’ star kept it simple wearing a black dress with cut-outs and an asymmetrical hem given a playful touch with heart-shaped sandals.

Melissa Fumero: I was blown away by ‘Brooklyn Nine-Nine’ actress Melissa in this gorgeous Maxime Simoens gown. Yes, mostly because it’s in a rich blue hue, but also for the design on the bodice, which keeps this interesting, and her complementary accessories, which included a Rauwolf clutch and Jacob & Co. jewels. 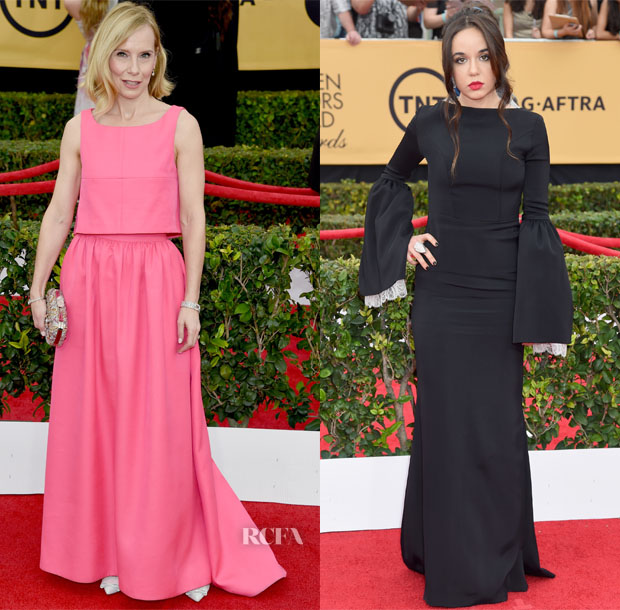 Amy Ryan: The actress wore a pink layered Honor dress, which is typical in design: simple and ultra feminine.

Lorelei Linklater: The young actress wore a black Honor dress with a white lace back and trim on the sleeves. This may not be everyone’s cup of tea, but it is very much in tune with the ‘Boyhood’ actress’s gothic style. 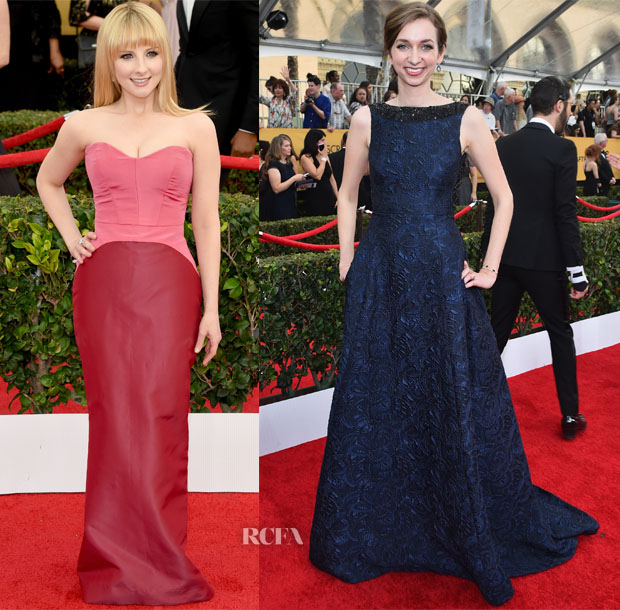 Melissa Rauch: I do love a streamlined silhouette and that is what the ‘Big Bang Theory’ actress served up with this Pamella Roland pink and cherry-red strapless gown. 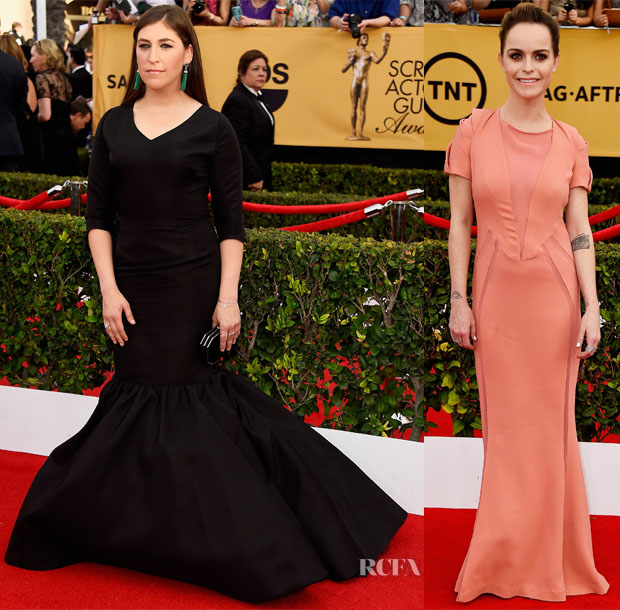 Mayim Hoya Bialik: Christian Siriano has been on quite an epic roll. Proving once again why he is the man of the moment, the designer created this simple yet scene-stealing mermaid gown for the gorgeous actress. She played her part too by adding those stunning Ivanka Trump Fine Jewelry emerald earrings and gliding down the red carpet with such grace.

Taryn Manning: This is the softest I have ever seen the ‘Orange is the New Black’ actress. She wore an Elisabetta Franchi coral gown with sheer panel insets from the 2014 Fall collection. I can’t say I am a huge fan of the design though. 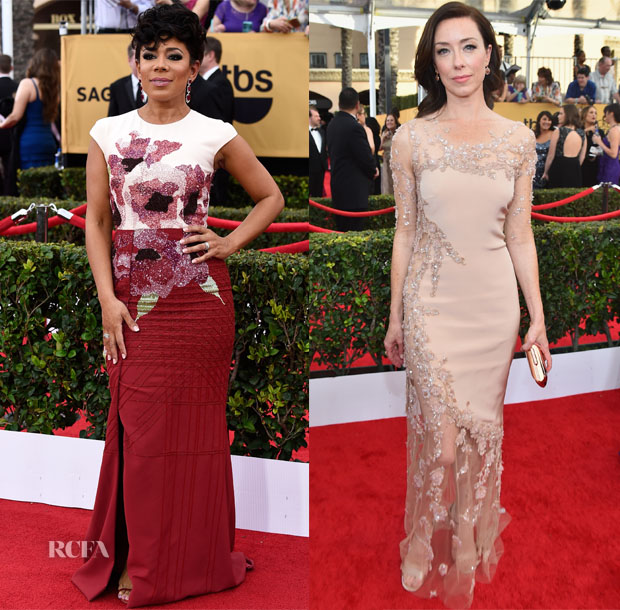 Selenis Leyva: I could’ve got on board with the ‘Orange is the New Black’ actress’s Bibhu Mohapatra Spring 2015 cap-sleeve dual-colour gown with floral embroidery had it not been for her hair. 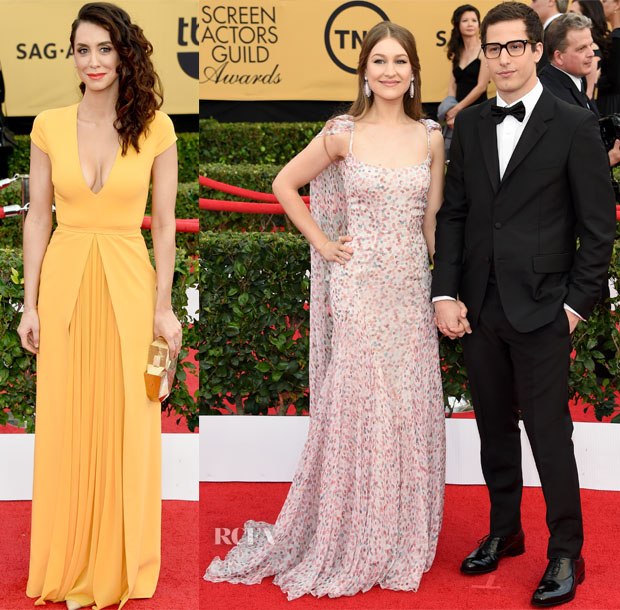 Mozhan Marno: The ‘Blacklist’ actress was a vision in yellow. I love the orange lip and gold Emm Kuo clutch, which topped off this look to perfection.

There are so many good looks here. Who is your favourite and who would you like to see in the best dressed poll for this event?