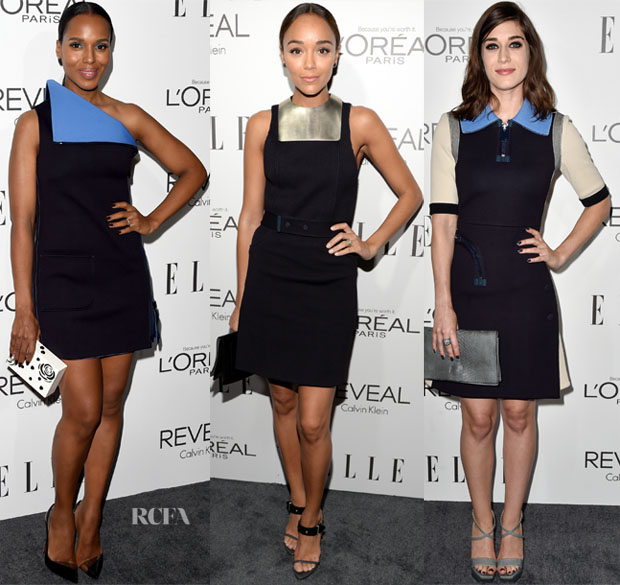 Elle hosted their 21st annual Women in Hollywood celebration held at the Four Seasons Hotel on Monday (October 20) in Beverly Hills, California in association with Calvin Klein, so of course many of the attendees were decked out in the brand’s latest designs.

Kerry Washington: Working a Resort 2015 look which was edgier than we’ve come to expect from the ‘Scandal’ star, she pulled it off with ease. The fold-over neckline sits a lot higher than it does on the runway but this works in her favour, enhancing the matching blue eye makeup. I love the sexy Christian Louboutin ‘Miss Rigidaine’ pumps, but the black and white Thale Blanc clutch feels terribly out of place.

Ashley Madekwe: The actress can pull off just about anything and here she works a Resort 2015 LBD which is inherently minimalist, with the gold-metallic bib, David Yurman jewels and strappy sandals giving the look an edge.

Lizzy Caplan: Serving up a third Resort 2015 look, Lizzy opted for a sportier look, donning a colour-block look styled with grey accessories. The shoes can stay, but that clutch has gotta go. No clutch at all or something considerably smaller would’ve worked for me. 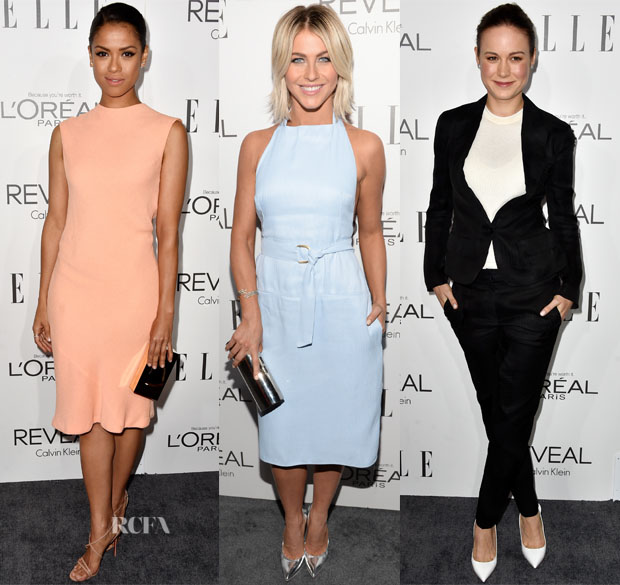 Gugu Mbatha-Raw: The British actress served up Calvin Klein elegance in excellent fashion with Vita Fede jewelry. Simple, minimal, in a bold hue which complements her skin so beautifully. Factor in the slick bun and sexy cat-eyes and this was one of my favourites on the night.

Julianne Hough: Still in no apparent hurry to reach for her Fall wardrobe, Julianne wore a pretty sky-blue Calvin Klein Collection halter frock styled with a Giuseppe Zanotti metallic-silver clutch and Casadei pumps to add some high shine to her fresh, summery look. 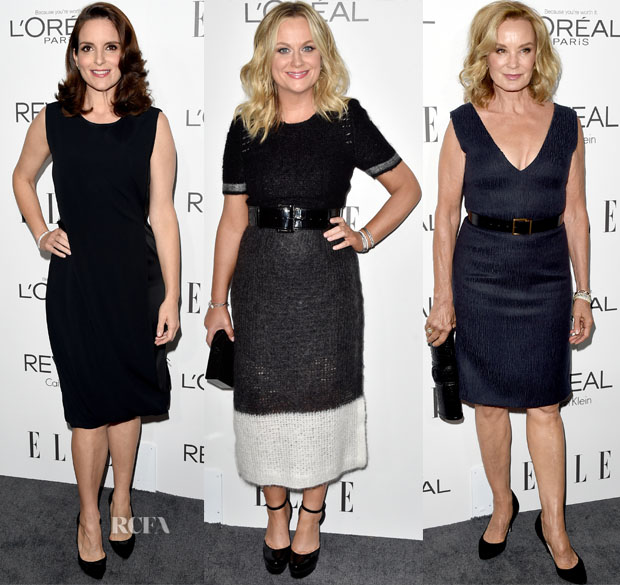 Tina Fey: The actress, who was also honoured at this event, kept it simple and chic in a Calvin Klein figure-hugging LBD.

Amy Poehler: The actress wore a cosy knit Calvin Klein Fall 2014 colour-block look which was presented without the silver buckle belt she opted to style her look with. Overall the look is just OK, but that is usually my feeling with Amy’s looks.

Jessica Lange: Like Tina, Jessica opted for a Calvin Klein LBD, yet hers proved to be a whole lot sassier with its plunging neckline.