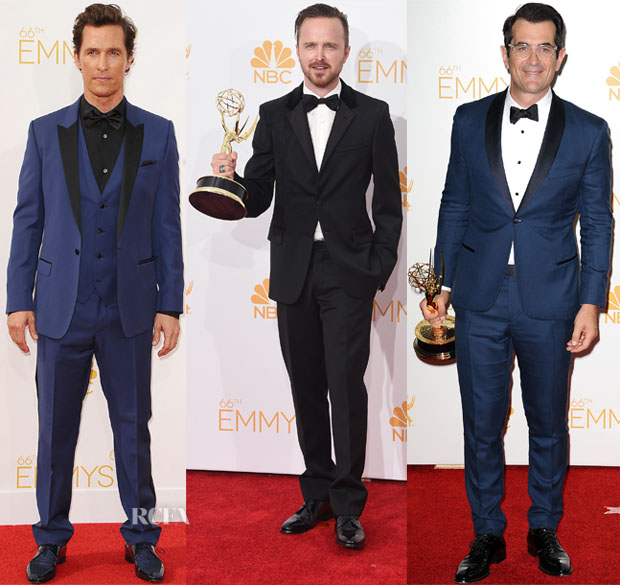 While the constellation of actresses on the scene at the 2014 Emmy Awards had all of us focused on the range of red-carpet gowns and glam, there was plenty more eye candy to be had with the men in the mix at the Nokia Theatre L.A. Live in Los Angeles, California on Monday night (August 25).

Matthew McConaughey: Not one to ever be a shrinking violet, the ‘True Detective’ actor and nominee suited up in a bold blue Dolce & Gabbana three-piece suit with contrasting black lapels, paired with Christian Louboutin ‘New Orleans’ flats, and a Bulgari watch and cufflinks. Was it my favourite look of his? Perhaps not. It even drew ‘A Night at the Roxbury’ comparisons among the Twitter-verse. But, with that handsome gaze, he can pull off anything.

Aaron Paul: The ‘Breaking Bad’ Emmy winner couldn’t have accepted his trophy in more classic fashion. He wore top-to-toe Prada in a black kid-mohair tuxedo, with a two-button notch-lapel design and velvet trim on the collar. A white smoking silk shirt, black bowtie and black spazzolato lace-up shoes, plus a Bulgari timepiece, completed the look.

Ty Burrell: Channeling his own blue mood, the ‘Modern Family’ Emmy winner wore a custom Todd Snyder tuxedo that was made especially for his big night. The Italian wool design was a collaborative effort between Ty, his stylist, Ilaria Urbinati, and the designer and boasts a unique shade of blue called ‘dusk,’ which nicely updates the tux from the more standard colourways of black and navy. 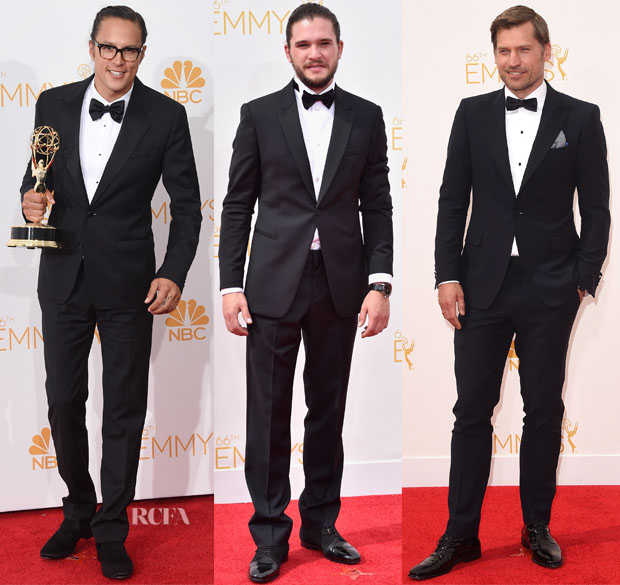 Cary Fukunaga: The ‘True Detective’ won his first Emmy—and dressed for the luminous occasion in a polished, slim-fitting Dolce & Gabbana black tux, topped off with a perfectly pert bow tie.

Kit Harington: Suiting up in a black Emporio Armani one-button, peak-lapel tuxedo with a white evening shirt and a black bowtie, the ‘Game of Thrones’ actor also went the classic route, finishing the look with Jimmy Choo ‘Prescott’ loafers.

Nikolaj Coster-Waldau: Instead of black, this ‘Game of Thrones’ guy took navy out for a spin in his Salvatore Ferragamo tuxedo, sophisticatedly paired with a white button-down shirt, bowtie and patent shoes. With the flourish of his pocket square, he couldn’t have looked more handsome if he tried. 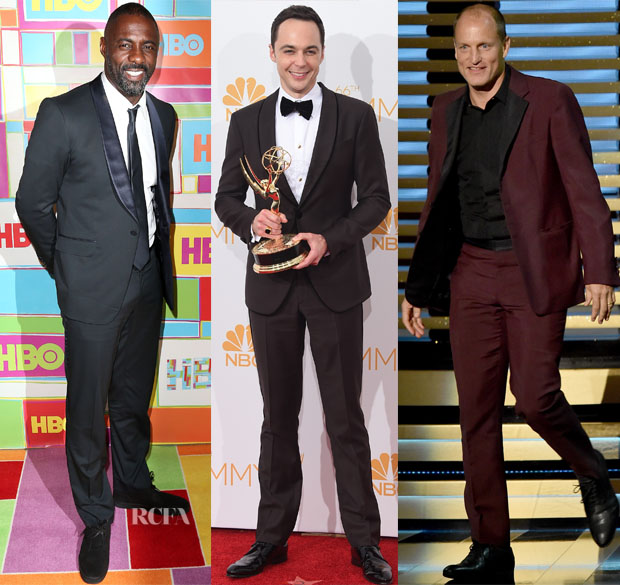 Idris Elba: The ‘Luther’ actor embraced a rich midnight-blue hue with a Gucci Made to Order satin shawl-lapel ‘Signoria’ tuxedo, a white dress shirt and a matching midnight-blue tie—one of the few who nixed the bowtie.

Jim Parsons: Leaving the more standard blue and black hues behind in favour of a rich chocolate brown, ‘The Big Bang Theory’ Emmy winner worked a custom wool and cashmere Giorgio Armani two-button, shawl-collar tuxedo with velvet trim. The outfit was completed with a classic evening shirt and a bowtie.

Woody Harrelson: Matthew McConaughey’s ‘A Night at the Roxbury’ partner-in-crime also coloured outside the lines in a burgundy Prada kid-mohair, two-button tuxedo with a black faille lapel, worn with a Prada black smoking popeline shirt. If nothing else, he stood out among the sea of same-ish tuxes. 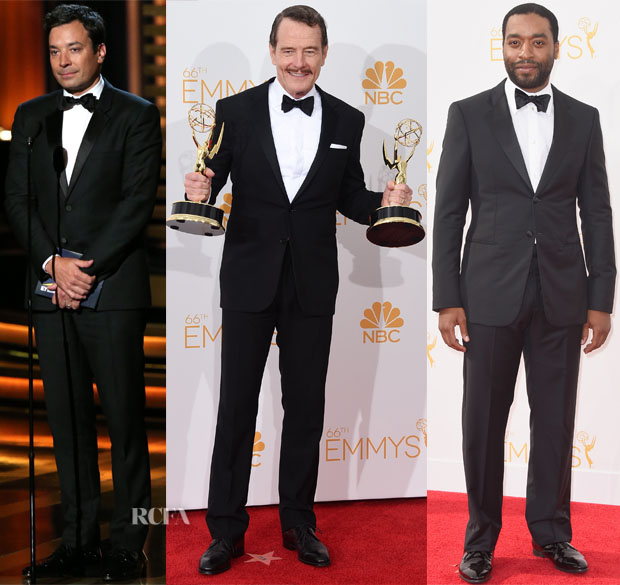 Bryan Cranston: Accepting his fourth Emmy win for ‘Breaking Bad,’ the actor posed with he and his show’s statues in a tailored Ralph Lauren tuxedo.

Chiwetel Ejiofor: The ‘Dancing on the Edge’ actor selected a Giorgio Armani black two-button, notch-lapel tuxedo with a classic white evening shirt and a bowtie. 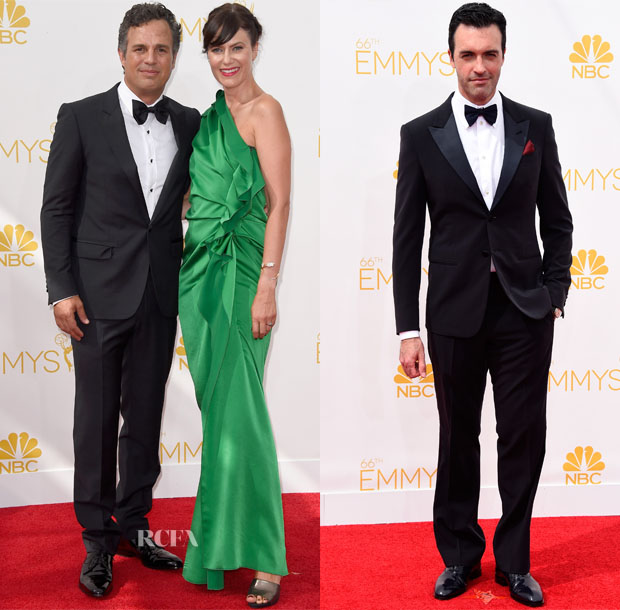 Mark Ruffalo: The actor attended with wife, Sunrise Coigney, by his side. He wore a navy Lanvin silk-wool blend, one-button tuxedo with black satin peak lapels and matching pants, matched with a white dress shirt with black glass buttons, a black satin bowtie, and black patent-leather oxfords. It was the perfect canvas for her jewel-toned, emerald-green silk one-shoulder gown with ruching at the side.

Reid Scott: Adding a bit of flair to his ensemble, Reid accented the midnight-blue Giorgio Armani one-button, peak-lapel tuxedo with a navy printed bowtie and a crimson pocket square. 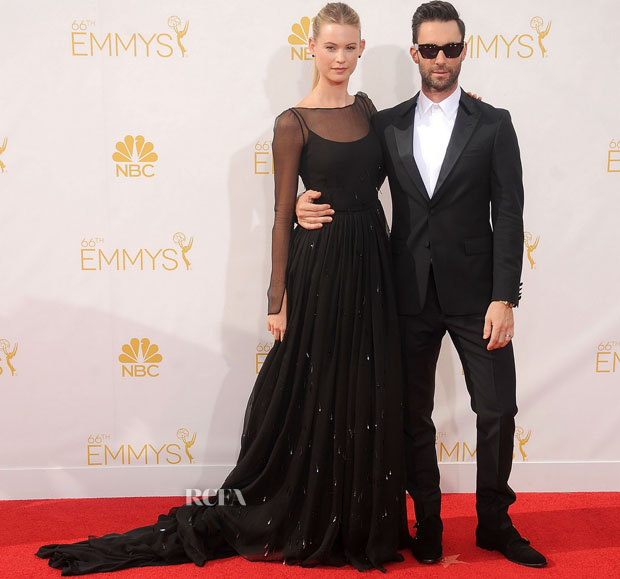 Adam Levine: Definitely one of the evening’s power couples, Adam Levine and Behati Prinsloo, brought some serious style swagger to the red carpet. The singer and ‘The Voice’ judge wore a black Prada peak-lapel, two-button tuxedo and white tuxedo shirt—topped off with a hot pair of shades that I surprisingly didn’t mind. His model wife chose a Prada black silk cigaline, long-sleeve gown with delicate oval paillettes cascading down the full skirt. She paired the gown with black peep-toe pumps and a black satin clutch with Swarovski crystals and a silver chain strap, all by Prada.