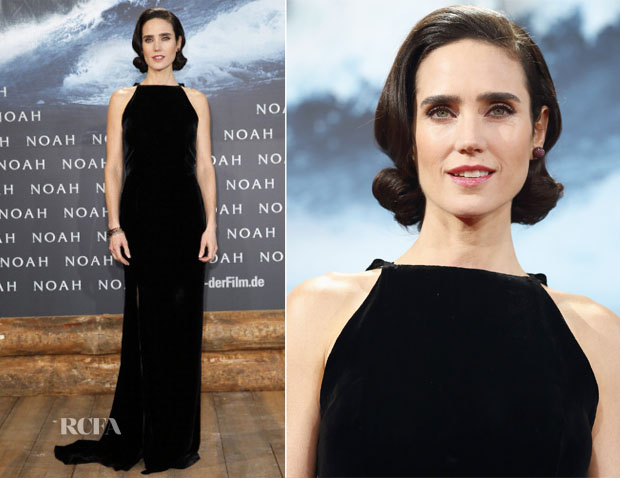 Jennifer Connelly was also at the ‘Noah’ Berlin premiere, alongside Emma Watson, held on Thursday (March 13) at Zoo Palast in Germany.

Already stunning us with her Givenchy Couture outing at the film’s Mexico City premiere, the actress continued to captivate in a custom Lanvin black panné velvet column gown with hook-and-eye neckline.

What the dress lacked in embellishment and sparkle, it made up for in its sleek silhouette, with a tastefully rendered front slit and triangle cutout at the small of her back.

On this occasion, I’m glad she opted for minimal jewels and black Christian Louboutin ‘Leonor Fini’ sandals instead of pumps.

With her glossy locks coaxed into a tucked-under ’do and the brush of a pretty berry-pink lip acting as her best accessories, Jennifer truly captured a glamorous old Hollywood mood—with a modern twist.

Jennifer Connelly in Lanvin and Emma Watson in Wes Gordon