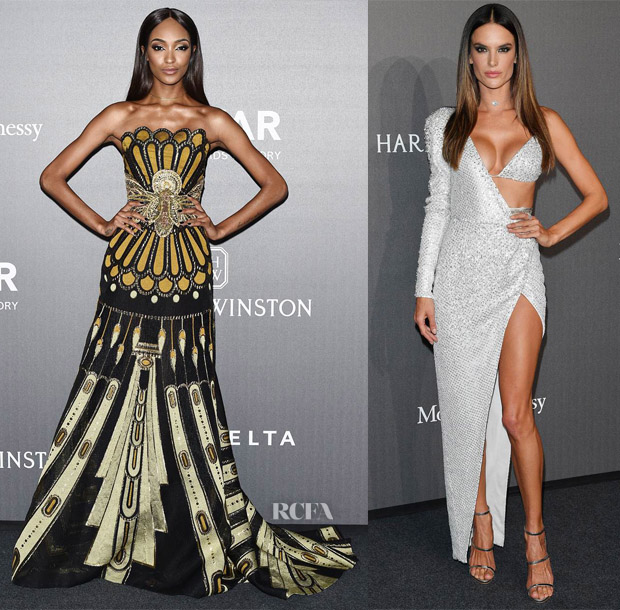 Beautiful babes lit up amfAR Milano 2017 on Thursday (September 21) wearing their most striking and varied ensembles.

Jourdan Dunn: Proving that shine and feathers aren’t needed to make an entrance, the model struck a pose in this bold Naeem Khan Fall 2017 gown. Wisely, she kept her styling simple to let all the abstract details on the dress be appreciated.

Alessandra Ambrosio: The Brazilian beauty’s Julien Macdonald Fall 2017 gown had lingerie leanings befitting a Victoria’s Secret supermodel. The triangle bikini top against the long sleeves is a strong contrast and makes me think this would have worked better as two separate dresses. 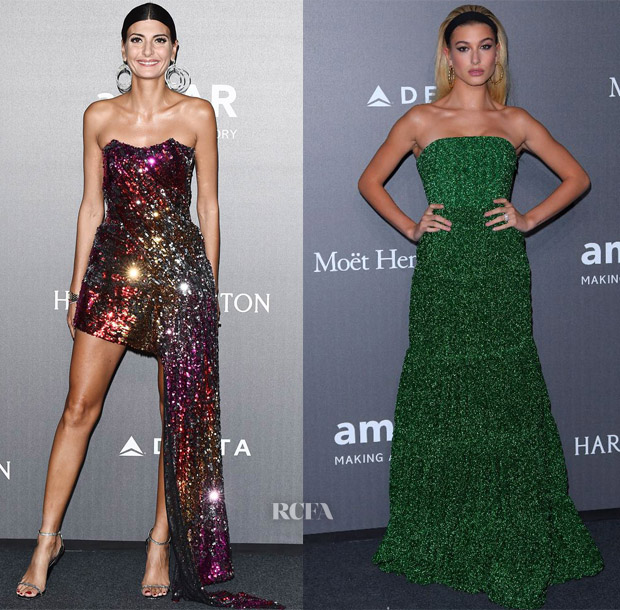 Giovanna Battaglia: The Italian editor and stylist took uneven hems to the extreme with a mini dress with a floor-skimming panel on the one side. The multicoloured Halpern Fall 2017 dress was previously worn by Marion Cotillard, Katy Perry and Cardi B. Given the modified version, it felt like a new piece, to me.

Hailey Baldwin: The model brought some Italian glamour to the carpet with her styling and accessories. The Missoni Resort 2018 gown stood alone entirely thanks to its texture. I fear that some might compare it to synthetic grass, but there was something interesting about it for me. My only wish was the gown was hemmed a few inches. 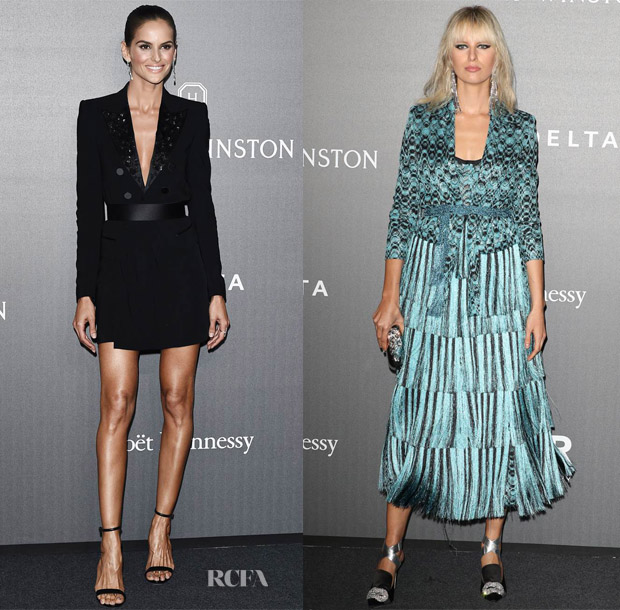 Izabel Goulart: The Brazilian model decided on tuxedo dressing with this long belted blazer. It wasn’t the loudest look, but the bejeweled collar and satin details had a refined elegance.

Karolina Kurkova: Like Hailey, Karolina experimented with textured Missoni. Her sky blue Resort 2018 ensemble had no shortage of elements from the printed jacket to the fringed skirt to the belt. The styling took it over the edge for me. A simple heel and stud earrings would have been sufficient. 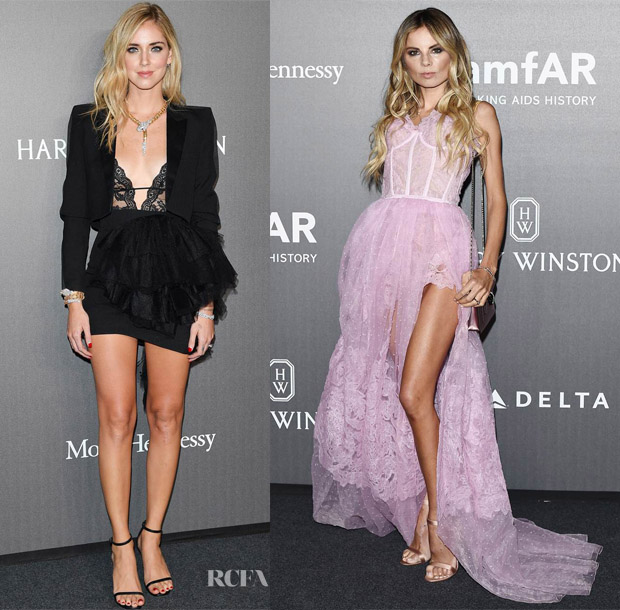 Chiara Ferragni: Bringing some femininity to suiting, the blogger wore a black Saint Laurent Fall 2017 ensemble. Some might be confused about the placement of the ruffle, but I found the overall mix of proportions and fabrics successful.

Erica Pelosini: Clad in pink Ermanno Scervino Fall 2017, Erica had her princess moment in the layers of pink. Of course that thigh-high slit underscored the sweetness of gown. If the look feels familiar, it was previously worn by Elsa Hosk. 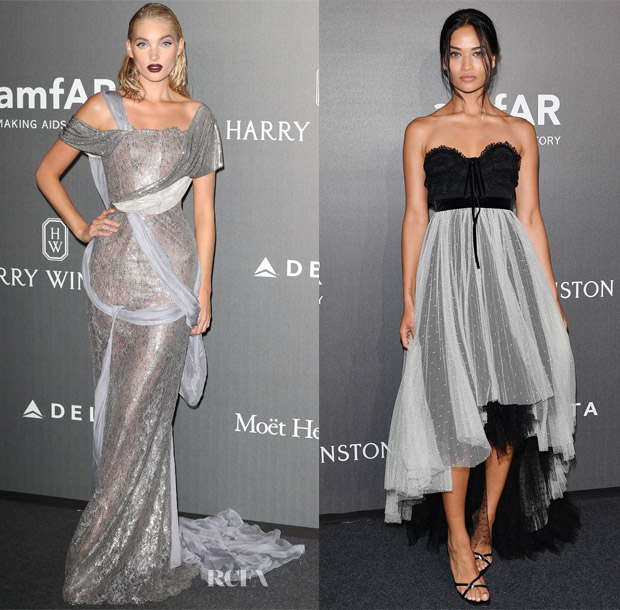 Elsa Hosk: Speaking of the model, she was wrapped up in Ralph & Russo Fall 2017 Couture gown. The weaving of the contrasting bands might look messy to some, but it came across as innovative as opposed to restricting.

Shanina Shaik: Mixing white with black and different sheer fabrics, the model’s Philosophy di Lorenzo Serafini Fall 2017 dress offered some interesting details. Alas, I don’t think the finish was as cohesive as it could have been. 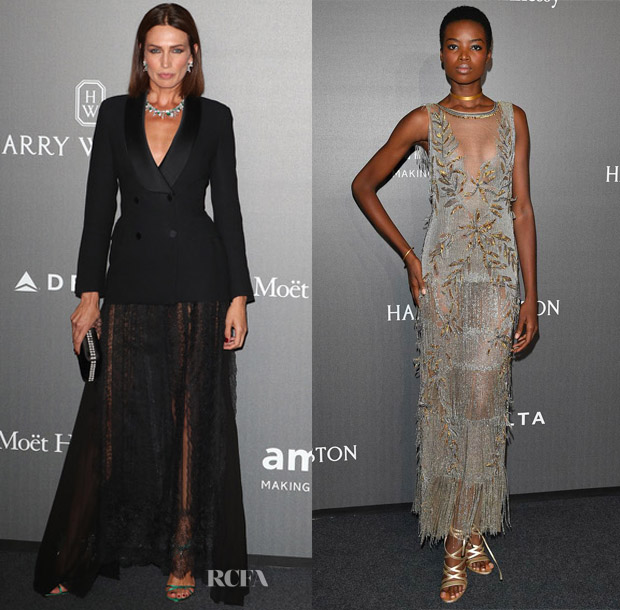 Nieves Alvarez: A sheer lace skirt added some sultry allure to the tailored black jacket in this Ermanno Scervino Fall 2017 ensemble. Statement Bvlgari jewels brought another dazzling element up top while coordinating Aquazzura sandals balanced out the bottom. The black Yliana Yepez clutch kept the contrast from being overkill.

Maria Borges: Donning Alberta Ferretti Limited Edition Fall 2016 Couture, the Angolan model turned heads in a sheer dress bedecked with floral appliqués. While a lot of us are suffering from sheer fatigue, I enjoyed the way the translucent dress shows Maria’s skin and brings out the gold tones of the surface detailing.